Ngata retires as a Raven; Billick also honored by team 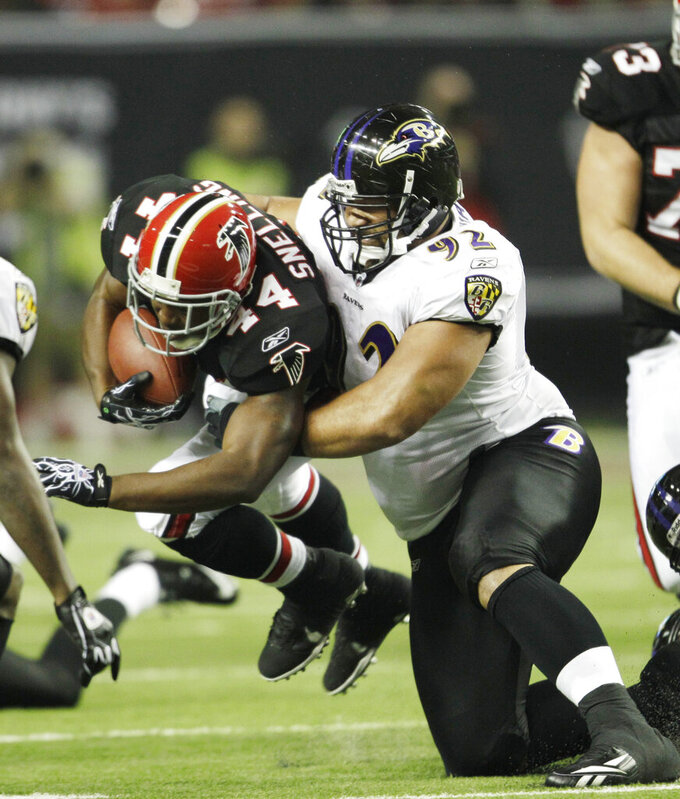 FILE - In this Nov. 11, 2010, file photo, Atlanta Falcons running back Jason Snelling (44) is stopped by Baltimore Ravens defensive tackle Haloti Ngata (92) In the first quarter of an NFL football game in Atlanta. Ngata came into the NFL with Baltimore and will leave as a member of the Ravens, the team that provided him with his best memories and a Super Bowl ring. (AP Photo/David Goldman, File)

OWINGS MILLS, Md. (AP) — On a day designed to honor Haloti Ngata's retirement as a member of the Ravens, his former coach in Baltimore stole a portion of the limelight.

Ravens owner Steve Bisciotti welcomed both Ngata and Brian Billick into the team's prestigious Ring of Honor, announcing Wednesday that Billick will be inducted in 2019 and Ngata in 2020.

Ngata was drafted out of Oregon as the 12th overall pick in 2006. The first NFL coach he played for was Billick, who guided the Ravens from 1999-2007 and hoisted the Super Bowl trophy after the 2000 season.

Billick compiled a 80-64 record but was fired by Bisciotti after Baltimore staggered to a 5-11 finish in 2007. It took 12 years, but Bisciotti figured the time was right to finally recognize the 65-year-old Billick for his contribution to the franchise.

"I told Brian how honored we would be, and how lucky we are as an organization, to have had him here," Bisciotti said.

Ngata, 35, will also have his name emblazoned on the Ravens' home stadium, a suitable salute to a five-time Pro Bowl defensive tackle who made a name for himself on a defense that included future Hall of Fame entrants Ray Lewis and Ed Reed.

As a star-struck rookie, Ngata recalled with a chuckle his first encounter with Lewis at training camp.

Lewis informed Ngata that he could call him Ray.

Ngata and Lewis teamed with Reed and others to win the Super Bowl in 2012. After the 2014 season, Ngata and then-general manager Ozzie Newsome became embroiled in a salary dispute, a prelude to a trade that sent the 320-pound lineman to the Detroit Lions.

"At first I was kind of shocked a little bit," Ngata said. "But I understood. I was against the salary cap. I wasn't moving and they weren't budging."

Ngata toiled three seasons in relative anonymity in Detroit before closing out his 13-year career in Philadelphia in 2018.

"The last month of the season I woke up and thought, 'Why am I still doing this?'" he said. "Once I'm questioning why I'm playing football, I know it's time to retire."

It was important to Ngata that his NFL career would end where he started it.

Wiping away tears, Ngata told an audience of family, friends, former teammates and fans, "This is an amazing organization. I loved being a Raven. I always knew I wanted to retire as a Raven. I just couldn't wait to come back."

Ngata was twice an All-Pro. He had 32 ½ sacks, five interceptions and seven forced fumbles over 180 games.

Being in Ravens Ring of Honor is special, but there might be something even better in store for Ngata, according to Newsome.

Newsome, who drafted Lewis and Reed, is also a member of the Hall of Fame. He believes Ngata deserves to be honored in similar fashion.

"When I think about a Hall of Famer, No. 1, did he play on a winning ball club? He did," Newsome said. "Was he part of a Super Bowl? He did. Was he a dominate player in his era at his position? He did. So, he's checked all of those boxes."

Newsome reluctantly gave up a sixth-round draft pick in 2006 to move up one spot in the first round to get Ngata. He never regretted it.

"We had been (drafting) pretty good in that sixth round, so were giving up a good player," Newsome said. "But we were getting a great player. A rare player."

It didn't take long for Billick to realize that Ngata was going to be a perfect fit for a team build around its defense.

"You knew right from the get-go, all right, this guy is going to be special," Billick said.

Billick never got another coaching job after being fired by Bisciotti, but he became close friends with Baltimore's current coach, John Harbaugh, and remains loyal to the club.

"When Steve called it was a surprise, but it goes to the heart of what Haloti was talking about," Billick said. "I don't think there's another organization that has what this one does."