NHL gambles on getting through pandemic outside a bubble 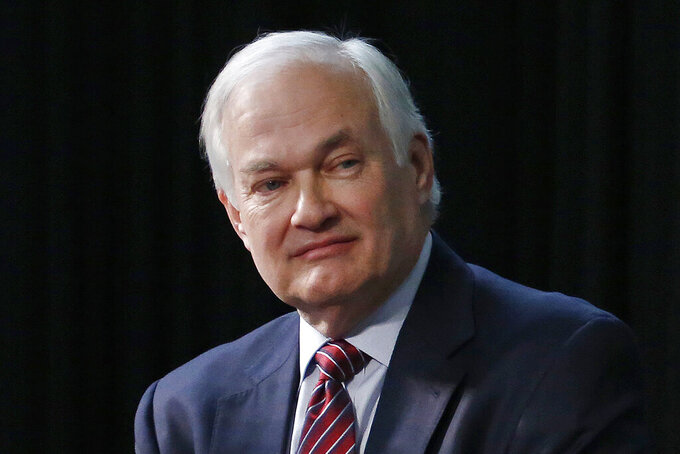 FILE - In this Jan. 24, 2015, file photo, NHL Players' Association Executive Director Donald Fehr listens during a press conference in Columbus, Ohio. Like the NBA, the NHL is going forward with a season without a bubble. Commissioner Gary Bettman, Players' Association executive director Don Fehr and other top officials explain how hockey got to this point with a CBA that may have only staved off headaches and playing in mostly empty home arenas to start. (AP Photo/Gene J. Puskar, File)

When the NHL charter flight back from the Edmonton bubble landed in New Jersey, Gary Bettman's phone started ringing.

The commissioner thought he'd get a couple of weeks to exhale after awarding the Stanley Cup to the Tampa Bay Lightning. Instead, it was back to work.

Of course, planning for the 2021 season began well before late September. It took a long-term extension of the collective bargaining agreement between the league and players' union, layers of health and safety protocols, realigned divisions and convincing multiple government agencies that it is safe to play.

The season opens Wednesday and Bettman estimates the league will lose over $1 billion even by playing. It's a gamble everyone was willing to make to keep hockey going during the pandemic.

"It would be cheaper for us to shut the doors and not play," Bettman said Monday. “We’re coming back to play this season because we think it’s important for the game, because our fans and our players want us to, and it may give people, particularly those who are back in isolation or where there are curfews, a sense of normalcy and something to do.”

None of the four major North American men's professional sports leagues rely as much on attendance as the NHL: Roughly 50% of all revenue comes from ticket sales, concessions and other in-arena elements. That's why the league and players prioritized extending the CBA before completing last season in twin playoff bubbles; they knew no fans slashes revenue for everyone.

The agreement gave the NHL a blueprint to operate and labor peace through at least 2026.

“You always have to make judgments about what you think the future’s going to hold and how do you attempt to maximize the benefits and minimize the detriments, mitigate your risks, take advantage of opportunities and so on," NHLPA executive director Don Fehr said in a phone interview. “I think the agreement that we reached last summer, certainly from the players’ standpoint, was fair and reasonable and appropriate, and took all of those things into account. And I don’t second guess it.”

Living by the terms of that agreement means some short-term pain for owners now, and Bettman warned recently that players could have to repay some money later based on the 50/50 split of revenue. But that was just one part of the puzzle of pulling all this together, which started with when to begin play and how to do it.

With the clock ticking down in mid-December, the sides agreed to open training camps for most teams just after Jan. 1 and drop the puck Jan. 13. Each team is scheduled to play 56 all divisional games during the regular season set to run until May 8, though the Dallas Stars' outbreak and delayed start has already forced the question of how to handle various situations.

On the eve of the season opener, the league announced Tuesday 17 of the 27 players with confirmed positive test results for the coronavirus from Dec. 30-Jan. 11 are on Dallas, with the other 10 from eight other teams.

There's no hard and fast rule on how many positive test results would endanger a game and the addition of taxi squads of four to six players mitigates the risk. Watching other leagues postpone and reschedule games has helped, as has regular communication among medical experts.

“We’ve had the opportunity to learn a lot from each other because there’s so little science behind what’s going on because it’s happened so quickly,” NHL chief medical officer Dr. Winne Meeuwisse said. “Everything from infection control to testing strategies, how we interpret test results, how we act on positives, how we manage cases are all things that that we share on an anonymous basis so that we are able to refine what we do and do the best job we can of keeping the players and everybody around the game safe.”

Players are tested daily and all arenas except for three — Florida Panthers, Arizona Coyotes and the Stars — will not have fans as the season gets going. The league realigned its teams to include an all-Canadian division to avoid border crossing hassle; questions remain about where the San Jose Sharks will play home games because of a ban on team sports in Santa Clara County, California.

Expected and unforeseen problems will come up, but officials who were optimistic the entire way through negotiations to get to this point are confident the NHL can again get to the finish line.

“We’ve watched what’s happened in in the other sports and they’ve had their issues and been able to get through it, and I’m pretty sure we’ll be able to do it,” Fehr said.

Bettman agreed there will be bumps along the way, and deputy commissioner Bill Daly doesn't expect widespread vaccination of players to alleviate concerns before the end of this season. Just like the bubble, the NHL wants to get through this season with hopes of brighter days — and full arenas — ahead.

“What’s aspirational is we get through the season, we have an on-ice terrific season, great playoffs, we present the Stanley Cup and the world is back to normal for the '21-22 season,” Bettman said. “Anything beyond that would be great.”