As No. 2 seed, Chiefs on cusp of returning to AFC title game 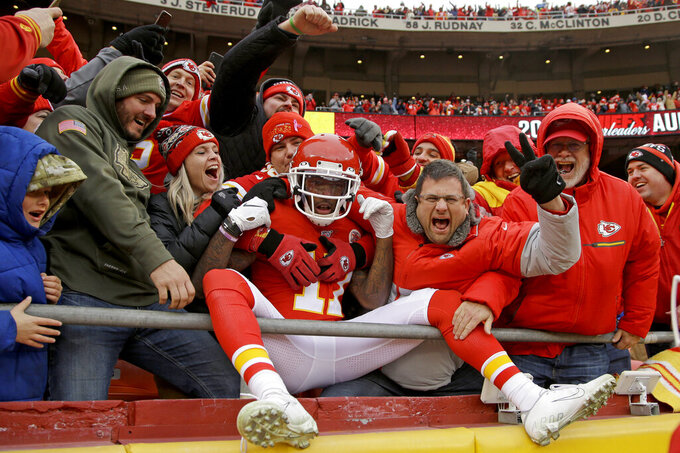 Kansas City Chiefs wide receiver Mecole Hardman (17) celebrates his kickoff return for a touchdown with fans during the second half of an NFL football game against the Los Angeles Chargers in Kansas City, Mo., Sunday, Dec. 29, 2019. (AP Photo/Charlie Riedel)

KANSAS CITY, Mo. (AP) — The Kansas City Chiefs were inches away from playing in the Super Bowl a year ago and, to many in their locker room, the sting of that overtime loss to New England has served as motivation to return to the AFC title game this season.

Now, after everything fell their way Sunday, the Chiefs need just one win to get there.

Their routine victory over the Los Angeles Chargers went down just as the Patriots were losing to the Miami Dolphins in Foxborough, giving the Chiefs the No. 2 seed in the AFC. That means they get the week off while the Patriots are forced to play a wild-card game, and ensures a divisional-round game will be played at Arrowhead Stadium the next weekend.

“We've got a lot of confidence, man. Defense is balling and our offense is getting things rolling,” Chiefs wide receiver Tyreek Hill said. “We're the hottest team. We have the most swag in the AFC."

Yes, the top-seeded Ravens haven't lost with Lamar Jackson on the field in ages. The Patriots still have Tom Brady, and the Texans already have gotten the best of Kansas City once this season.

But the Chiefs (12-4) have also won six straight, their offense playing at a high level and their defense evolving into one of the best in the NFL. It had a streak of 10 consecutive quarters without allowing a touchdown end on Sunday, but it still held Philip Rivers and the Chargers to 21 points and made crucial plays when they mattered in the fourth quarter.

It's a far cry from last season, when the Chiefs defense failed to stop the Patriots in the fourth quarter and overtime, and when ex-linebacker Dee Ford's offside penalty helped set Brady and Co. up for the winning touchdown.

“We have grown tremendously from the situation last year and there is a new makeup of the team,” Chiefs tight end Travis Kelce said “It's as easy as that. I think, moving forward, we are a lot more comfortable this year than we were last year.”

Most of that new makeup is on defense, where the Chiefs swung a trade-and-sign deal for pass rusher Frank Clark and reeled in safety Tyrann Mathieu in free agency. Clark was a disruptive force again on Sunday, sacking Rivers once and causing him nightmares a dozen other times, and Mathieu had his team-leading fourth interception.

“Obviously we have some great momentum heading into the postseason,” Mathieu said. “It's going to be fun. I love playing football. I love the challenges. I love everything that comes with it. I know my teammates feel the same.”

The Chiefs defensive front has been crucial to their late-season surge, blocking up running lanes and creating pressure on opposing quarterbacks without the need to blitz. Clark had three quarterback hits to go with his sack Sunday, recently acquired pass rusher Terrell Suggs had a sack and two hits, and defensive tackle Chris Jones had a sack and two more hits.

The Chargers' backfield duo of Melvin Gordon and Austin Ekeler was held to 92 yards rushing.

The secondary could use the bye week to get healthy. The Chiefs were already down cornerback Morris Claiborne, who has been dealing with a shoulder injury, and safety Juan Thornhill left Sunday with torn ligaments in his knee. Defensive back Bashaud Breeland was in and out of the lineup while dealing with an illness, though he should be OK going forward.

Suggs, who had just a couple days of practice before playing against Chicago last week, was more involved in the defense in his second game in Kansas City. He was in the backfield on numerous occasions, though he also misplayed a screen pass.

Wide receiver Sammy Watkins had just one catch for 8 yards against Los Angeles, though part of that had to do with the fact that Kansas City rarely had the ball. The Chiefs only had one possession in the first quarter, ran three plays in the third because of Mecole Hardman's 104-yard kick return touchdown and Damien Williams' 84-yard touchdown run, and ran 48 offensive plays to 74 for the Chargers.

Thornhill was the biggest injury, one that could sideline the standout rookie well into next season. But the Chiefs should get offensive lineman Andrew Wylie back from his ankle injury for the divisional round

3 — The number of losses the Chiefs have against the AFC West since 2015 after wrapping up a 6-0 season. Their 27-3 mark is the best winning percentage by any team against its own division in a five-season span since the AFL-NFL merger in 1970.

Rest and recuperate. The Chiefs won't know who they face in the divisional round of the playoffs until next weekend, though it will be the highest remaining seed from among the Texans, Bills and Patriots.