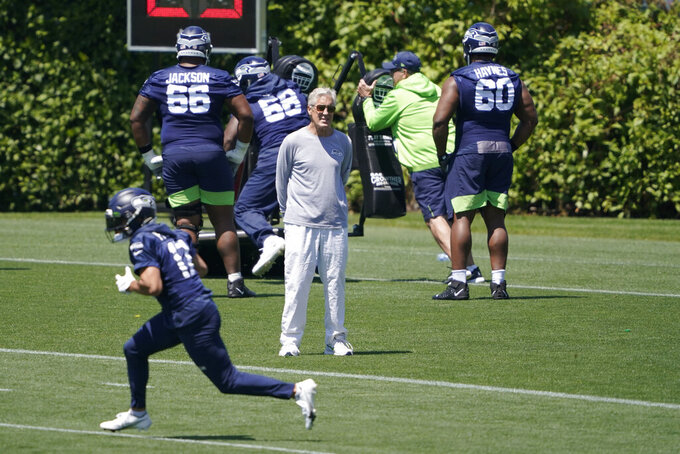 RENTON, Wash. (AP) — For a decade, No. 50 was seemingly always on the field for the Seahawks.

Right now, the number is going unused in Seattle, and it may remain that way if the Seahawks have decided K.J. Wright’s run as a lynchpin starter for the defense has truly come to an end.

“Of course, it’s awkward. I’m entering year 10 and I’m used to seeing a particular face,” linebacker Bobby Wagner said. “I’m hoping that everything still works out and we’re able to get him back. I think he’s a tremendous player, a tremendous person, someone that anyone would love to have on their team and so we’ll see what happens.”

Wright is currently a free agent and without an employer for the 2021 season, raising the possibility the longest-tenured Seahawks player during Pete Carroll’s regime may have played his final game with the team that drafted him 10 years ago.

The 31-year-old can still play, and that was evident last season. Wright switched positions from weakside to strongside linebacker early in the season following an injury to Bruce Irvin, yet went on to have one of the more productive seasons of his career.

But the team appears ready to move on. The Seahawks were thrilled with the rookie campaign by Jordyn Brooks playing off the line of scrimmage at weakside linebacker after Wright made his position switch.

Seattle is also intrigued by the potential of Darrell Taylor as a strongside linebacker on early downs and a rusher in passing situations, filling the role that once led to a big payday for Irvin. Taylor, a second-round pick in 2020, didn’t play last season due to setback in his recovery from lower leg surgery, but he appears fully healthy heading into this season.

Those factors leave Wright without a role in Seattle, at least for now.

“The door is still open for players,” Carroll said. “We’re still working at figuring out the roster and how it’s going to go. Until we get on the field and can see how things are starting to come together, there won’t be no major changes in what’s going on because we’re pretty committed at this point. That doesn’t mean that we’re not tuned in to all of the options and the opportunities that are out there, because we are.”

Seeing Wright playing elsewhere seems unfathomable, although there were indications early in free agency that there was interest on the market. Seattle general manager John Schneider said during the draft he was surprised Wright hadn’t signed somewhere.

Wright was a fourth-round pick in 2011 by Seattle and instantly inherited a starting role. Last season, Wright was one of just five players on Seattle’s roster who remained from the Seahawks' last Super Bowl appearance.

Wright started 140 of the 144 regular-season games he played — the only four games he didn’t start came during his rookie season. Last season following Brooks’ arrival and the position change, Wright went on to have 86 tackles, 11 tackles for loss, two sacks and 10 passes defensed.

There was still something there, although it was clear Seattle was eyeing Brooks as his eventual replacement.

“K.J. had an outstanding career here, he set the bar high for sure," Brooks said last month. "So it’s definitely no slack here. I’m just ready to get in and prove that I can do this.”