No time for excuses or pouting for Titans after ugly loss 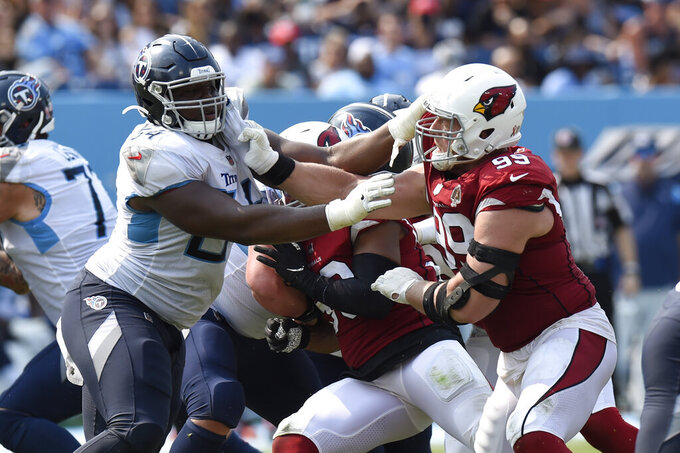 NASHVILLE, Tenn. (AP) — Tennessee is about to find out if the Titans are who they thought they were coming into this season.

The Titans came into this season with high expectations as the defending AFC South champs. That swagger deflated quickly as the Arizona Cardinals scored the first 17 points in romping all over them in a 38-13 flop Sunday that had fans booing before halftime and leaving before the fourth quarter.

Coach Mike Vrabel said Monday he doesn't want the Titans leaning on excuses, which are never good enough in the NFL.

“It’s a fine line between sitting there and pouting,” Vrabel said. "I think we got to own it. It starts with me.”

Asked if this was a wakeup for the Titans, Vrabel said he never knows how to answer that.

“You don’t want to lose, but hopefully we can learn from this quickly and move on,” Vrabel said.

The Titans looked nothing like the high-powered offense led by Derrick Henry, the AP NFL Offensive Player of the Year who ran for 2,027 yards last season. The addition of seven-time Pro Bowl wide receiver Julio Jones caught three passes for 29 yards with a roughness penalty wiping out a 7-yard run by Henry.

“That would fall under the category of doing dumb (stuff) that hurts the team right there in bold letters,” Vrabel said.

Tennessee brought in three high-profile veterans to fix a defense that was among the NFL's worst last season, yet old issues still plagued the Titans.

Safety Kevin Byard, who had one interception, said this is the adversity that helps a team figure out who it is.

“We’re not going to sit here, mope around, keep our heads down,” Byard said. “We’re going to keep battling, keep fighting and get ready for Seattle.”

The Titans' trick plays worked nicely. Safety Amani Hooker caught a pass on a fake punt to convert Tennessee's first first down of the game, and Henry's toss back to Tannehill for a flea flicker went 39 yards to Chester Rogers in Tennessee's longest offensive play to set up the first touchdown.

Everything? The Titans couldn't stay on the field on offense, going three-and-out or worse on five drives. An offense that averaged 30.7 points a game in 2020 scored fewer points than in any regular-season game last year. The defense also couldn't get off the field, giving up 53.8% conversions on third down (7 of 13).

Kicker Michael Badgley. Signed Friday to the practice squad, he was promoted Saturday when Sam Ficken went on injured reserve. He missed an extra point and a 46-yard field goal both wide left. The Titans, who have Randy Bullock on the practice squad, announced they waived Badgley after Vrabel talked to reporters.

“Take a look at some guys working out, Randy’s on the practice squad, find somebody that we think is going to make them and protect for him,” Vrabel said. “That’s the plan.”

Hooker played only 36 defensive snaps after hurting a foot.

Tennessee visits Seattle (1-0) on Sunday trying to avoid an 0-2 start to the season. The Titans haven't opened a season losing consecutive games under Vrabel. They reeled off three straight wins after the other season-opening loss, which came in Vrabel's head coaching debut.