No timeout, no challenge for Cowboys after apparent fumble 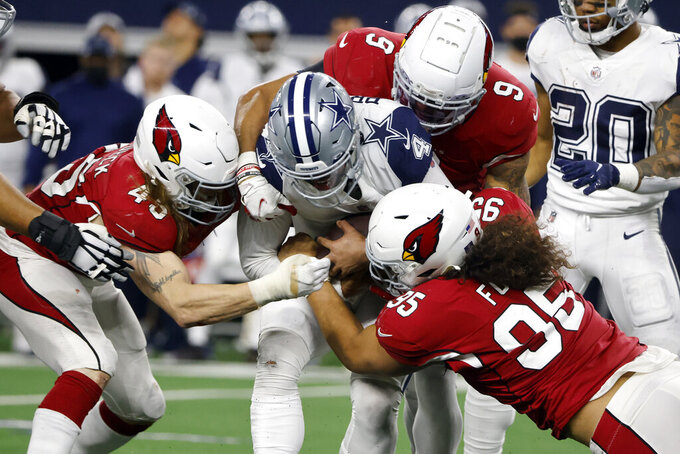 ARLINGTON, Texas (AP) — The Dallas Cowboys were out of timeouts and couldn't challenge an apparent fumble that likely would have given them the ball back with just over 2 1/2 minutes left in Sunday's game.

Instead, Arizona got a first down on the next play and ran out the clock, beating the NFC East champion Cowboys 25-22 in their regular-season home finale that had a playoff feel — though the play along the Dallas sideline didn't bring the season to a bitter end.

The Cowboys (11-5) will be back home for a wild-card game in two weeks, possibly against the Cardinals, after finishing the NFL's first 17-game regular season next Saturday at Philadelphia.

During the play, Arizona running back Chase Edmonds appeared to lose control of the ball before he was down when defensive end DeMarcus Lawrence jumped on his back. The official immediately ruled the ground caused the fumble, but video replay from a couple of angles showed Lawrence's hit could have jarred the ball loose. But there was no way for the Cowboys to request an official review.

“It was totally a fumble. I just don’t understand how with the technology that we have today, even if we don’t have timeouts, or whatever it may be, to ... challenge it. It’s so obvious,” linebacker Leighton Vander Esch said. “Certain things are so obvious in games that refs are messing up. Why aren’t they fixing it? It doesn’t make any sense to me. To me, we’re playing more against the refs than we are other teams.”

The disputed fumble came a play after the Cowboys called their third and final timeout with 2:51 left in the game, after an 11-yard run by Edmonds that followed another timeout after Kyler Murray's first-down pass to tight end Zach Ertz.

“Hopefully the NFL can sit down with their team, review the film, learn from their mistakes and get better from it,” Lawrence said.

“I feel like that fumble on the sideline was a takeaway. We just didn’t get it. The refs didn’t call it,” he added after a game in which the NFL's top defense for takeaways had none. “At the end of the day, we learn from our mistakes and get better.”

The Cowboys had only two timeouts late after having to use one with 4:04 left in the third quarter when the Cardinals offense initially stayed on the field with fourth-and-5 from the 8 after an incomplete pass. Caught off guard, Dallas called timeout before also Arizona (also playoff-bound at 11-5) opted for a 26-yard field goal by Matt Prater to go ahead 22-7.

Had officials ruled a fumble on Edmonds' run, the play would have automatically been reviewed.

“Well, they didn't rule it a fumble. That's why you save a timeout if you can," Cowboys owner Jerry Jones said. “But of course, we were trying to keep something left on that clock to get it done. ... I wish we had it left to use. Could have made a big difference obviously.”

Dak Prescott threw two short touchdowns in the fourth quarter that sandwiched another field goal by Prater — a 2-yard TD to Cedrick Wilson and then a 4-yarder to Amari Cooper with a 2-point conversion pass to Wilson with 4:42 left.

Prescott and the Cowboys never got the ball back after that, even after it looked like they had forced a fumble.

“It was frustrating, but we’ve got to know that we’ve got to keep our head down and keep grinding it out. Just know that that defense we’ve got, they’re going to get us the ball back. We’ve just got to get to work,” said running back Ezekiel Elliott, who was limited to 16 yards on nine carries.

“If you look around the league, this isn’t just the first time it’s happened,” Vander Esch said, not giving any specific examples. “There’s other guys around the league that have been dictated from, I don’t know if it’s incompetence or what it is. Doesn’t make sense to me, and it feels like it’s not hard to fix that.”