Now it's Bills with seed on the line against Patriots 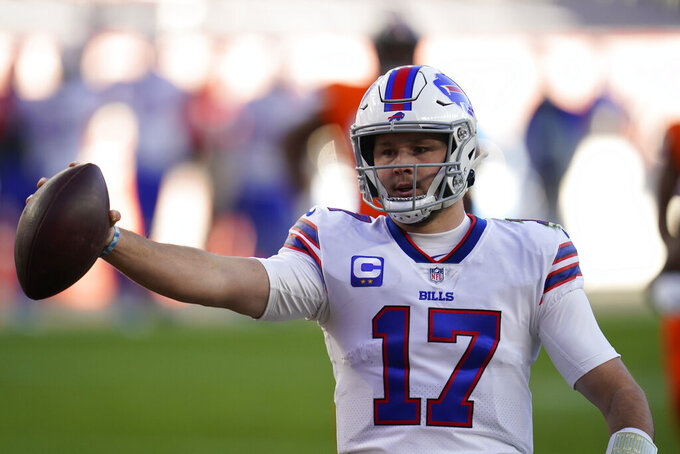 Buffalo Bills quarterback Josh Allen celebrates after scoring a touchdown during the first half of an NFL football game against the Denver Broncos, Saturday, Dec. 19, 2020, in Denver. (AP Photo/Jack Dempsey)

So many December games between the Patriots and Bills, with one team fighting for its postseason seeding and the other playing out the string.

For the first time in decades, Buffalo has reversed the roles.

The AFC East champion Bills visit Foxborough on Monday night having already clinched home-field advantage in the wild-card round of the NFL’s expanded playoffs and still mathematically alive for the No. 1 seed and first-round bye.

The 11-time defending division-winning Patriots have nothing more than a few morsels to play for: They can still reach .500. They can bring coach Bill Belichick closer to Don Shula’s career victory total. They can keep alive their record streak of 19 seasons without getting swept by a divisional opponent.

But when it comes to the playoffs, they’ll be sitting home for the first time since 2008.

“It’s the defending AFC East champs that have held that position for multiple, multiple, multiple years,” Buffalo coach Sean McDermott said this week after the Bills clinched their first home playoff game since 1996. “It’s one of the greatest — if not the greatest — coach ever to coach our game. They’re going to be prepared, they’re going to be well-coached, and they’ll be ready to go.”

With the Patriots' dominance in the past two decades, it's easy to forget that Buffalo was the last AFC dynasty, with four straight Super Bowl appearances in the 1990s and 10 postseason appearances in 12 years.

But it's largely been a playoff desert since then, with just a pair of wild-card appearances since then — both losses. And the biggest reason is their path has been blocked by the Patriots, who under Belichick and Tom Brady won 17 of the last 19 division crowns since 2001.

So when the Bills clinched the AFC East for the first time since 1995 on Saturday, thousands of fans were waiting at the airport to greet them when they arrived back in Buffalo after 1:30 a.m.

“They’re talking about it, and I was like, ‘Man, there’s probably not even that many people there. They just talking,'” said receiver Stefon Diggs, who is in his first year with the Bills. "And then when I get off the plane there, God damn, that’s a lot of people.

“You’re thankful to have fans like that, loyal fans,” he said. “Knowing that they can’t be in the stadium, but they’re pulling for us. So it’s a good feeling.”

The Bills Mafia — as they are known — won a contest for the best NFL fanbase this fall. The prize: A billboard proclaiming their supremacy, placed in an opposing town.

The Buffalo fans picked a spot on Route 1 just four miles south of Gillette Stadium. It will stay up until Jan. 4.

Here are some more things to look for in Monday night's game:

Belichick gave a vote of confidence to Cam Newton after a Dec. 10 loss to the Rams in which the quarterback completed nine passes for 119 yards and an interception. Jarrett Stidham, a 2019 fourth-round pick, came on to mop up but didn't drive New England to any scores.

Asked again this week if he would stick with Newton, who was the 2015 NFL MVP but this year has five touchdown passes and 10 interceptions, Belichick declined to answer.

The Bills won 24-21 on Nov. 1 in Buffalo, giving them a chance to sweep the Patriots this season. The Patriots haven’t been swept by a division opponent in 19 seasons, an NFL record that far surpassed the previous mark of 11 by the 1971-81 Cowboys and the '70-80 Rams.

New England was swept by the Jets and Dolphins in 2000. The Bills last swept the Patriots in 1999.

The Bills are suddenly on a prime-time roll in having won their past three national TV games, including their win at Denver on Saturday.

Buffalo improved to 7-21 since 2001 in games played on Thursday, Saturday, Sunday night, Monday and even Tuesday, after the Bills lost at Tennessee in October in a game rescheduled due to COVID-19.

The Bills’ prime-time record against the Patriots mirrors that of Buffalo going 6-35 against New England since Belichick took over in 2000. Buffalo is 0-6 in night games against the Belichick-coached Patriots, and 0-8 overall.