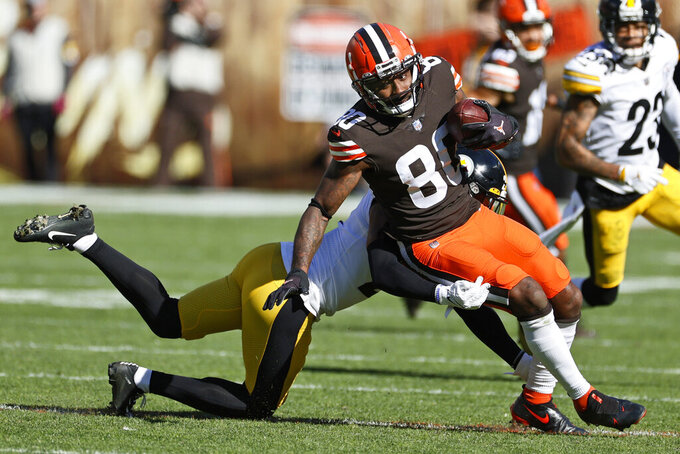 The Browns can't count on anything right now.

Landry fumbled and had two critical drops in the fourth quarter Sunday as Cleveland, which came into the season with enormous expectations, lost 15-10 to the Pittsburgh Steelers and fell into last place in the AFC North.

With the Browns (4-4) driving for a potential go-ahead touchdown, Landry caught a short pass from Baker Mayfield and got to Pittsburgh's 21-yard line, where he was stripped by Steelers linebacker and former teammate Joe Schobert.

“I really was not trying to fight for extra yards,” Landry said. "I was trying to get down. He made a great play.”

The deflating turnover buckled the knees of Browns fans, who anticipated their team having a much easier time with their hated division rival.

Cleveland did get the ball back with 4:22 left. But Landry couldn't handle two passes by Mayfield — one was a clear drop, the other high, but catchable on fourth down for the five-time Pro Bowler — and the Steelers took over.

Landry was asked if he should have made both plays.

The miscues were uncharacteristic for Landry, but that's how things are going these days for the Browns, who have played inconsistently for weeks and are dealing with injuries on both sides of the ball.

“We need to look at this one and then move on,” Landry said. "We have nine more games like coach (Kevin Stefanski) said in the locker room after the game, and that is what is important.”

But there seems to be more pressing issues than just putting this loss behind them.

Although loaded with weapons, Cleveland's offense isn't producing big plays or big points. With the exception of a scripted opening drive that resulted in a field goal, the Browns struggled to move the ball.

They've scored just 41 points in the past three games, putting too much pressure on a defense with its own issues. It figured to be different this week as it was the first time Mayfield had Landry, running back Nick Chubb and receiver Odell Beckham Jr. together on the field.

But little changed as the Browns spun their wheels in the FirstEnergy sod.

Even when things were going well, something got in the way.

Early in Sunday's game, tight end Austin Hooper dropped a short pass inside the 5-yard line that would have been a walk-in touchdown.

And on the drive in which Landry had his two drops, Beckham, who was only targeted twice and had one catch for 6 yards, short-armed a deep pass down the middle, and receiver Rashard Higgins had a false start.

“I'm looking at it from the entire offense, and we scored 10 points," Stefanski said when asked about the passing game. "That's not good enough. I'm sure there are areas in the pass game that have to improve. I know there are areas that we can help as coaches. We just have to do it. Talking about it is not going to get it done. We have to work at it.”

Mayfield wasn't the problem this week.

Returning to the lineup after missing one game with a torn labrum and fracture in his left shoulder, he completed 20 of 31 passes for 225 yards while wearing a new, stabilizing harness.

There were numerous plays in which Mayfield didn't have any open receivers and either had to reset his feet and scramble or get sacked (four times).

Mayfield wasn't surprised to hear Landry accept some of the blame, but there was plenty to be shared.

“It's on all of us,” he said. "Everybody is going to point fingers at a few plays, but the fact is we just did not get into a rhythm. We stubbed our toe a few times — penalties and just did not make the plays we needed to to win.

"It's pretty simple. We all have to take ownership. This does not just fall on him (Landry) at all by any means. There were a lot of throws that could have been made today, and there were plays we should have had. Plain and simple.”