Opening weak: Browns have history of failure to start season 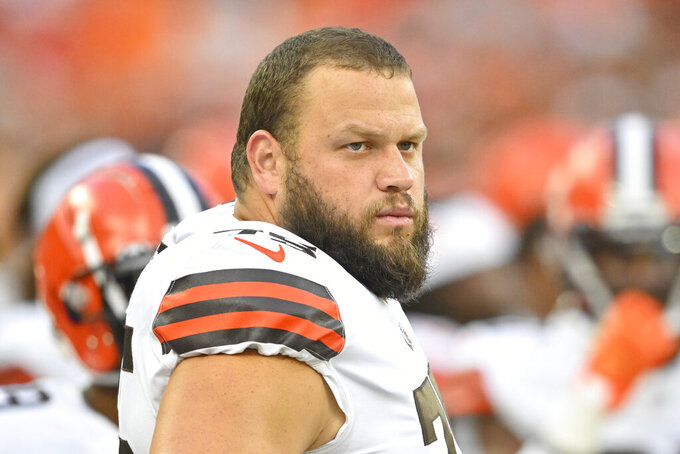 FILE - Cleveland Browns guard Joel Bitonio stands on the field during an NFL preseason football game against the Chicago Bears, Saturday, Aug. 27, 2022, in Cleveland. Amid a multitude of missteps, there's one statistic that underscores the Browns' misery since their expansion reboot in 1999 better than any other. They're 1-21-1 in openers. All-Pro left guard Bitonio couldn't help but smile when asked where winning an opener is on his bucket list. (AP Photo/David Richard, File)

Amid a multitude of missteps, blown draft picks, coaching changes and enough drama and controversy to fill a rack of supermarket tabloids, there's one statistic that perhaps underscores the Browns' misery since their expansion reboot in 1999 better than any other.

Starting with a 43-0 drubbing by the rival Pittsburgh Steelers in ‘99, the Browns have been mostly awful in season openers. Their lone win came in 2004, when quarterback Jeff Garcia led them to a 20-3 victory over the Baltimore Ravens.

It's been downhill ever since, a pathetic 0-16-1 mark with the lone bright spot a 21-21 tie with the Steelers four years ago.

Making matters worse, the Browns haven't won a road opener since 1994, when Bill Belichick was their coach.

As he begins his ninth season in the NFL, All-Pro left guard Joel Bitonio couldn't help but smile when asked where winning an opener is on his bucket list.

“Right now, it’s huge,” said Bitonio, drafted by the Browns in the second round in 2014. “It’s our next game. So it would be great to win this game. I know I haven’t won one since I’ve been here. So it would be huge.”

Every opener is important, bringing a fresh start for every team from the Super Bowl champion to those who followed failure with firings. A clean slate.

This opener is particularly noteworthy for the Browns because it pits them against Mayfield, who insists he's not seeking revenge against the team that drafted him first in 2018 and then kicked him to the curb after four seasons. He was traded to the Panthers in July.

The Mayfield factor puts more pressure on the Browns and added anxiety for their fans, who can't fathom the idea of having to endure watching the cocky QB get revenge and parade around in triumph.

“I really don’t worry about that,” he said. "I don’t. I worry about trying to go 1-0 versus a good football team on the road. I can promise you there are a lot of guys in here who are brand new to this organization and new players.

"They do not really concern themselves about the past.”

Maybe not. But the team's futility in openers has been a topic of conversation inside the team's facility this week.

Bitonio mimicked his coach while saying there's no added emphasis or motivation needed to win.

“To be cliche, coach Stefanski always talks about going 1-0 and that’s our next opponent right now is the Panthers and we’re trying to win this game,” he said. “But I think afterward you can think back and look at it but right now, it’s like let’s just get this Week 1 win.”

The Browns' sad history in openers has ranged from slim losses to lopsided ones.

Twenty years ago, Cleveland was beaten 40-39 by Kansas City, which won on a last-second field goal set up by Browns linebacker Dwayne Rudd being penalized for taking off his helmet while celebrating what he thought was a game-ending sack.

Bitonio can't find a common thread in the losses.

“I mean, there was a few years when we were really bad,” he said. “So that’s part of it. But I feel like last year we came out and we played pretty well. It didn’t work out for us, but there’s definitely been some moments.”

Bitonio recalled his rookie season, when the Browns fell behind the Steelers 27-3 at halftime and rallied before losing on another late field goal.

“We’ve been in ones and then we’ve laid some eggs too,” he said. “So it’s part of it, but I don’t think any of that really matters anymore. It’s a new team, it’s new players and we’re exited for the challenge this week.”

NOTES: DE Jadeveon Clowney returned to practice after missing one day with an unspecified illness. CB Greedy Williams (hamstring) was not on the field during the portion open to reporters. ... Special teams coordinator Mike Priefer said Demetric Felton will return punts and kickoffs. The Browns had to adapt after losing Pro Bowler Jakeem Grant Sr., who was signed as a free agent, to a season-ending knee injury in camp. Priefer feels Felton has improved after handling those duties as a rookie last season.