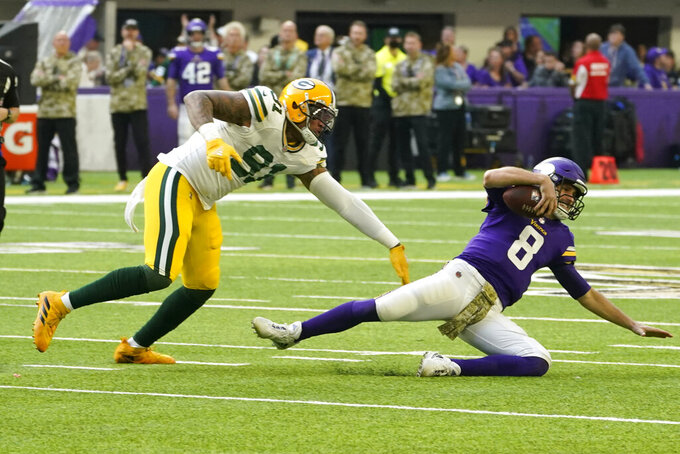 Minnesota Vikings quarterback Kirk Cousins (8) slides to the turf ahead of Green Bay Packers outside linebacker Preston Smith (91) during the first half of an NFL football game, Sunday, Nov. 21, 2021, in Minneapolis. (AP Photo/Jim Mone)

MINNEAPOLIS (AP) — Green Bay's defense toppled star quarterbacks Kyler Murray, Patrick Mahomes and Russell Wilson in impressive fashion in the past three games, picking up the slack for an offense that's used to carrying the Packers.

Kirk Cousins, Justin Jefferson and the rest of a potent Vikings offense sent the Packers back to the drawing board.

Cousins threw for 341 yards and three touchdowns — including 169 yards and two scores by Jefferson — and directed two go-ahead drives in the final seven minutes for the Vikings in a 34-31 victory on Greg Joseph's 29-yard field goal as time expired.

“Just came down to miscommunication and execution,” said Green Bay linebacker Preston Smith, who had two sacks. “We know what we've got to do. We know what’s the assignment each and every week. I think it was probably some miscommunication on the back end, and it caused them to get open a couple times. We just can’t let him get hot. He got hot, and he did what he had to do to help his team.”

Last week, Wilson returned from a broken finger, but was handed the first shutout of his NFL career as the Seahawks managed just 208 yards.

The Packers entered the week third in the NFL in fewest points and fewest yards allowed. The Vikings finished with 408 yards and averaged 6.2 yards per play on Sunday.

“We knew it was an explosive offense,” Green Bay coach Matt LaFleur said. “They've got two premier receivers. Dalvin Cook, he’s a premier back, and I think Kirk Cousins is a premier quarterback. So that’s quite a tandem that they have across the board. I think their O-line did a nice job. It’s a good offense, and they got the better of us today.”

Cousins led the Vikings 79 yards in 12 plays after Green Bay had taken a 24-23 lead with 7:49 left. The Packers answered in one play, a 75-yard touchdown pass from Rodgers to Marquez Valdes-Scantling.

Then Green Bay’s defense almost had the stop it needed.

Cousins’ first pass on the final drive went deep, again, to Jefferson. Safety Darnell Savage appeared to make a leaping interception. Savage lost control of the ball as he hit the turf, and it was ruled incomplete after a replay review.

With new life, Cousins and the Vikings went 64 yards in eight plays. They kneeled down to set up Joseph’s winning kick.

“It’s an emotional rollercoaster the entire game, just in terms of being down 13 points, having the resiliency to fight back to take the lead and have opportunities,” LaFleur said. “Certainly, you’d love to survive the ground right there. Unfortunately, he didn’t. That’s just the way it worked, and then they were able to march the ball down and kick the game-winning field goal.”

The defense was missing Rashan Gary, the team’s top pass rusher, because of an elbow injury.

Cornerback Jaire Alexander hurt his shoulder in Week 5 and went on injured reserve. Outside linebacker Za’Darius Smith hasn’t played since the season opener because of a back injury. Both Alexander and Smith were Pro Bowl picks last year.

Whitney Mercilus, Smith’s replacement, tore his biceps last week and will miss the rest of the season.

This short-handed defense had no answer for Cousins, Jefferson and Adam Thielen.

“Kirk hit his throws today,” Smith said. “We allowed him to be comfortable, and that’s what happens when you let him get comfortable. He can make throws and he can hurt you, as long as he’s back there sitting in the pocket with time to throw and complete passes.”