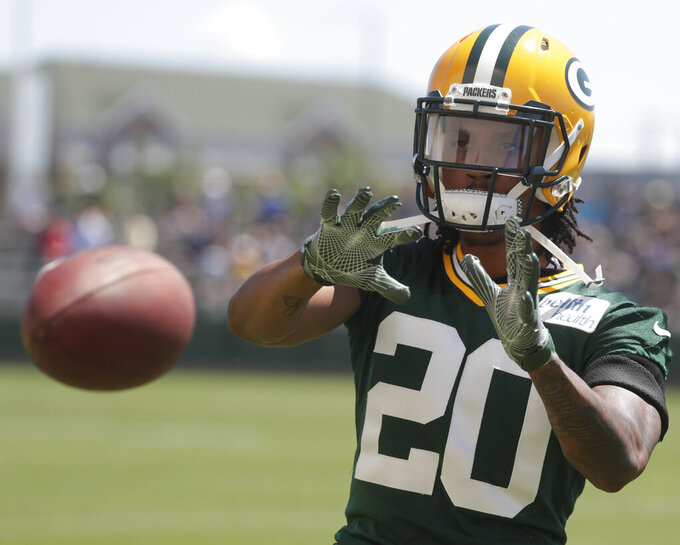 FILE - In this Wednesday, June 13, 2018 file photo, Green Bay Packers' Kevin King catches a ball during a practice session at their NFL minicamp in Green Bay, Wis. After ending his 2020 season with a disappointing performance in the NFC championship game, cornerback Kevin King stayed with the Green Bay Packers rather than leaving via free agency. This preseason, King has not only been battling back from a hamstring injury, he’s also been competing with first-round draft pick Eric Stokes to keep his starting job.(AP Photo/Morry Gash, File)

GREEN BAY, Wis. (AP) — After ending his 2020 season with a disappointing performance in the NFC championship game, cornerback Kevin King stayed with the Green Bay Packers rather than leaving via free agency.

This preseason, King has not only been battling back from a hamstring injury, he’s also been competing with first-round draft pick Eric Stokes to keep his starting job.

And yet, there’s no place he’d rather be, regardless of the challenges of the recent past and the present.

“I really didn’t want to be nowhere else, to be honest,” King said after practice Tuesday, the first time he’s had the opportunity to speak with reporters since the Packers’ season-ending 31-26 loss to the Tampa Bay Buccaneers. “I feel like we have the pieces to get over that hump.”

For the 26-year-old King, there are several obstacles he must overcome as he enters his fifth NFL season: His history of injuries, and memories of his crucial mistakes against the Buccaneers.

From a health perspective, he’s played in only 41 of a possible 64 regular-season games because of injuries. King missed five games last season with a quadriceps injury. He started camp this year on the non-football injury list with a hamstring injury before being activated Aug. 12.

Not coincidentally, 2019 was his healthiest season and also his best. He played 15 games (14 starts) and led the Packers in interceptions with five. That came after he had missed more games (17) than he’d played (15) during his first two seasons.

That’s why Packers coach Matt LaFleur remains an ardent King supporter, even as naysayers haven’t forgotten the two crucial mistakes he made in a loss that kept the Packers from reaching the Super Bowl last season.

“He’s a guy I have a lot of faith, a lot of confidence in,” LaFleur said. “I think when he’s healthy, he’s really tough to deal with.”

King’s two biggest mistakes against the Buccaneers came at critical times and were costly. One was just before halftime, when he misplayed Tom Brady's pass to Scotty Miller that went for a 39-yard touchdown and gave Tampa Bay a 21-10 lead.

In the days after the loss, LaFleur admitted that there was a sideline miscommunication with him and then-defensive coordinator Mike Pettine that played a role in King’s mistake.

“Unfortunately, (the blame) doesn’t rest solely on him,” LaFleur said Tuesday. “That’s the responsibility of myself and our coaching staff.”

King’s second big mistake came late in the fourth quarter, with the Packers trying to get a defensive stop to get the ball back to the offense.

On third down, Buccaneers rookie wide receiver Tyler Johnson beat King on a route across the middle, and King tugged on Johnson’s jersey just before Brady’s pass arrived. The resulting penalty let the Buccaneers run out the clock and advance to the Super Bowl.

“Get over it? Things like that, I don’t know if you ever necessarily get over,” King admitted. “But it’s a learning experience. You listen to all these guys who have the greatest success stories, they’ve all used those quote-unquote ‘failures’ as turning points. I’ve challenged myself all offseason and continue to challenge myself to come out better from that situation so quote-unquote ‘failure,’ that’s just a word.”

LaFleur said he and King talked extensively before King re-signed with the team. They discussed what King’s potential role would be in new defensive coordinator Joe Barry’s scheme.

Since King returned to practice, he has been back with the No. 1 defense ahead of Stokes, who took most of the first-team reps while King was out.

LaFleur also made it clear to King that he wanted him to return. LaFleur got his wish when King re-signed on a one-year deal after not landing a multi-year deal elsewhere.

“He was a guy I was super-excited to get back,” LaFleur said. “He’s a resilient guy. He’s a smart guy. I think our value (of him) within our building is much higher maybe than public perception is out there.”

For his part, King is embracing whatever outside pressures there are.

“I’m not the type of guy that just tries to sweep (stuff) under the rug,” King said. “I want to finish this with my guys, the guys who’ve believed in me and the guys who continue to believe in me. I’m going to do my part to uphold my side of the bargain, but ... we’re here to win a Super Bowl. I just want to do my 1/11th on defense, and that’s what I’m here to do.”

NOTES: The Packers have traded cornerback Ka’dar Hollman to the Houston Texans for a 2022 seventh-round draft pick. In other moves, the Packers placed safety Will Redmond on injured reserve and released linebacker Kamal Martin and defensive lineman Josh Avery. Martin was a 2020 fifth-round draft pick.