Packers may have to face 49ers without top 3 running backs 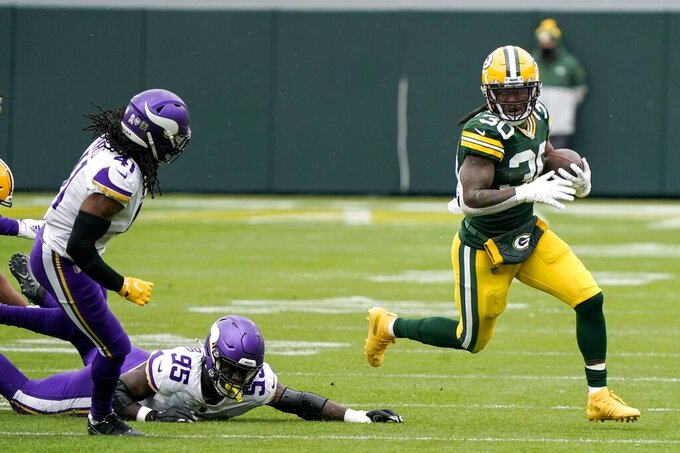 The Green Bay Packers could be missing their top three running backs when they visit the San Francisco 49ers on Thursday night.

Green Bay has placed running backs A.J. Dillon and Jamaal Williams plus linebacker Kamal Martin on the COVID-19 reserve list over the past two days. That makes all three players unavailable for Thursday’s game according to NFL protocols.

The Packers’ leading rusher is Aaron Jones, whose status remains uncertain for this week after he missed Green Bay’s past two games with a calf injury.

“We'll give him up to game time, and then we'll figure it out,” Packers coach Matt LaFleur said of Jones' status. “We'll see.”

The Packers (5-2) knew they’d be facing this obstacle once they learned Monday of Dillon’s positive test. Williams and Martin were added to the COVID-19 reserve list Tuesday because the league determined they had high-risk close contacts with someone who was infected.

Williams had rushed for 152 yards and caught 10 passes over the past two games while Jones was sidelined. Dillon, a rookie second-round pick from Boston College, had five carries for 21 yards and a 16-yard reception Sunday in a 28-22 loss to the Minnesota Vikings.

The Packers would be in a major bind if they’re also without Jones, who has rushed for 389 yards and has seven total touchdowns (five rushing, two receiving) in five games.

Green Bay’s only other running backs are Tyler Ervin and Dexter Williams, who isn’t related to Jamaal Williams.

“Those guys work hard, and they've been a part of our system now for over a year and they know what the expectations and standards are,” LaFleur said. “It was good work for them to get reps today. We'll see come game time if Aaron Jones can go or not.”

Ervin, who also returns kicks and lines up at receiver, has rushed four times for 43 yards and caught six passes for 33 yards this season. He missed two games because of an injury.

The 2016 fourth-round pick from San Jose State has 10 career carries. The Packers claimed him off waivers last December and re-signed him in March.

“He can do a lot,” quarterback Aaron Rodgers said. “I think it’s important we don’t put too much on his plate. He’s been in the receiver room for a majority of the year. He’s been a great returner for us. He’s obviously coming back from his hand injury, which has kept him out of a lot of return stuff. But he’s versatile guy.”

Dexter Williams, currently on Green Bay’s practice squad, has played one game this season without any carries. The 2019 sixth-round pick from Notre Dame had five carries for 11 yards last year. Rodgers said Williams has a “really good attitude” and has "done a nice job of growing up in the offense and feeling more comfortable with the checks and his responsibilities in pass-blocking and route-running.”

“The one thing I'll tell you about Dexter Williams is he has worked his tail off, and he does that on a daily basis,” LaFleur said. “He prepares as hard as anybody we have.”

Even with all their issues at running back, the Packers are much closer to full strength than the 49ers (4-4) heading into Thursday’s game.