Packers not ready to rule out RT Bryan Bulaga for Sunday 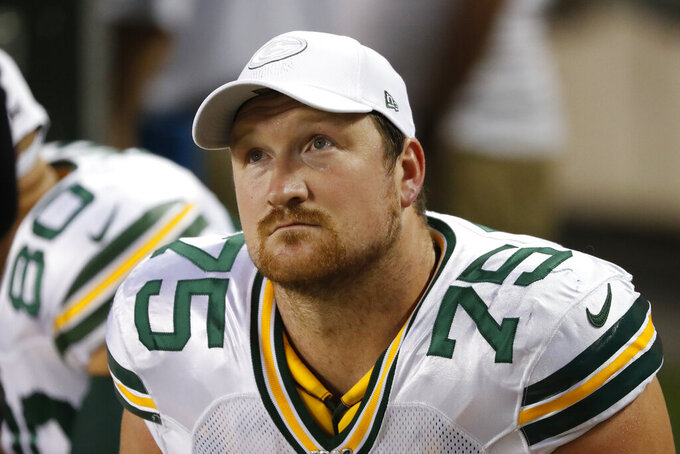 In this Sept. 5, 2019 photo Green Bay Packers offensive tackle Bryan Bulaga sits on the bench during an NFL football game against the Chicago Bears in Chicago. Packers coach Matt LaFleur isn’t ready yet to rule out starting right tackle Bryan Bulaga for Sunday’s game at the New York Giants. LaFleur said Wednesday, Nov. 27, 2019 that he would take the week to figure out the best combination of starting five for the offensive line. LaFleur said Bulaga, who left in the first quarter of Sunday night’s 37-8 loss in San Francisco with a knee injury, could still be a part of the equation up front. (AP Photo/Charles Rex Arbogast)

LaFleur said Wednesday that he and his staff will take the week to figure out the best combination of starting five for the offensive line. LaFleur said Bulaga, who left with a knee injury in the first quarter of Sunday night’s 37-8 loss in San Francisco, could still be a part of the equation up front.

“Our goal is just to put our best five out there and we’ll go from there,” LaFleur said. “We’re going to go through the week of practice and see what combination works the best. I also wouldn’t rule Bryan out at this point.”

The 6-foot-5, 314-pound Bulaga, who did not practice on Wednesday, got rolled up on from behind against the 49ers and did not return. The Packers believe he avoided a significant injury, confirmed by LaFleur’s hope that the nine-year veteran could still play against the Giants.

“Bryan is a warrior,” Aaron Rodgers said. “He’s been by my side — on my right side — for so many games in my career. He was my right tackle in the Super Bowl. (We’ve) been through a lot together. A lot of great ups, a lot of tough downs. But I’ve seen him rise again so many times in the face of injury.”

"I have a lot of confidence in Alex Light,” Rodgers said. “He's been a really nice, steady guy for us this year."

The Packers allowed five sacks in the loss. It was Green Bay’s second defeat in three games after starting the season 7-1.

LaFleur kept the door open for the Packers shuffling the starters if Bulaga can’t go, suggesting right guard Billy Turner could slide out to right tackle.

“We’ll look at everything,” he said.

Rodgers, like LaFleur, said he would not count out Bulaga for Sunday.

“I wouldn’t put it past him playing this week just knowing his makeup,” Rodgers said. “I think sometimes his cranky, ornery personality lends itself to being extremely physically tough. He has the ability to play through injury and he has his entire career so hopefully he’ll be ready to go.”