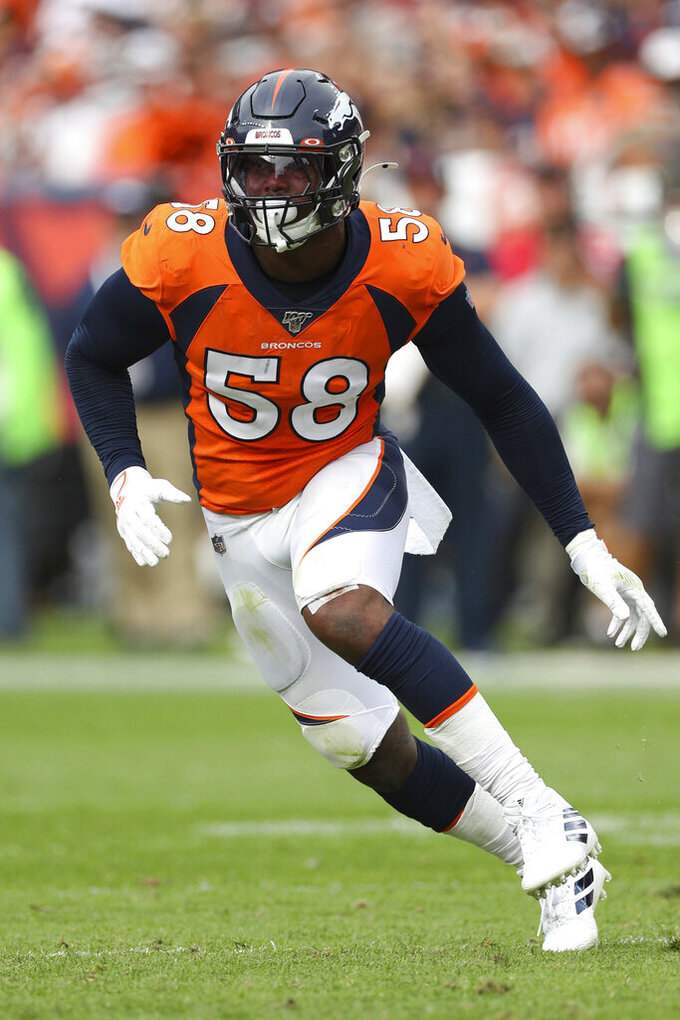 Denver Broncos outside linebacker Von Miller (58) takes a defensive position during an NFL game against the Chicago Bears, Sunday Sept. 15, 2019, in Denver. The Bears defeated the Broncos 16-14. (Margaret Bowles via AP)

Following a last-second Week 2 loss to the Bears, the three-time All-Pro edge rusher said it was time to "get back in the lab and keep practicing."

Through two games, Denver (0-2) hasn't forced a turnover or recorded a sack, both uncharacteristic of a Miller-led defense. But first-year coach Vic Fangio isn't worried.

"Not at this point, OK," he said. "The only thing I will say is I was disappointed in our rush in the last drive (on Sunday), but prior to that in these first two games they've been unusual games as it related to pass rush."

Miller, fellow pass-rusher Bradley Chubb and the rest of the Broncos will look to get a victory this Sunday against the Packers at Lambeau Field, a place where Denver has never won (0-5-1).

Aaron Rodgers, who for the third straight week will be staring down yet another prolific tandem of pass rushers, knows it's only a matter of time before the Broncos' defense starts piling up the sacks, especially with Fangio at the helm.

"He's a fantastic coach," Rodgers said. "I'm happy for him to get the opportunity after so many years being a great assistant in the league. I haven't spent a lot of time with him, but I have a ton of respect for the way he's gone about his business over his career."

Fangio faced Rodgers-led offenses seven times as Bears defensive coordinator from 2015-18. Fangio went 2-5 in those matchups, including a 1-4 mark in games played in Green Bay.

Fangio was in charge when the Bears forced Rodgers out of the game and into the locker room in the second quarter of the season opener last season, only to watch the two-time MVP throw three touchdowns and help the Packers overcame a 20-point deficit.

Packers left tackle David Bakhtiari primarily will be dealt the task of slowing down Chubb, who had 12 sacks last year as a rookie. Right tackle Bryan Bulaga will be on Von Miller watch. Miller is two sacks away from 100 for his career. He would be the 34th player in NFL history to reach the century mark.

"They're very, very good players," Bulaga said. "So regardless of what their numbers say, that's not what bothers me. It's watching tape of those guys win consistently, especially for Von, being able to do it for, what, nine years now? I mean, he's been doing it for a long time. He didn't forget how to rush the passer. I can promise you that."

The Broncos held Rodgers to 77 yards passing the previous time the teams met. But that was way back in 2015 when Denver's defense was leading the franchise to its third Super Bowl title and sending Peyton Manning into retirement as a champion. Only three defenders who started against the Packers that game are still starting: OLB Von Miller, DE Derek Wolfe and CB Chris Harris Jr. (the only returning offensive starter is WR Emmanuel Sanders).

RB Aaron Jones had 116 yards and a touchdown on career-high 23 carries in the Packers' win last week against the Vikings. Jones figures to be a large part of coach Matt LaFleur's offensive plans going forward as he continues to seek a balanced offense.

"When I first saw him when he came up with them, I looked out and said, 'Where'd they get this guy?' Fangio said of Jones. "And I think he was a sixth-round pick, and I'm saying, 'Jeez.' He's powerful. He's got really good balance. He runs tough. He's a capable pass receiver out of the backfield. They do everything with him. They got a steal there."

The Broncos haven't had their full defense together so far with ILB Todd Davis (calf) and CB Bryce Callahan (foot) missing the first two games. Callahan was limited in practice and odds are he won't be back for the Packers. But Davis, the team's leading tackler last season, finally looks ready to return to the lineup. He's been out since tearing his left calf on the first day of training camp in July.

ALL EYES ON JIMMY

TE Jimmy Graham has been unable to practice this week for Green Bay because of a groin injury, which could affect his status for Sunday. Meanwhile, the Packers signed TE Evan Baylis to the 53-man roster.

The Broncos are bedeviled over left tackle Garett Bolles' holding habit, which has somehow gotten worse under the tutelage of Hall of Famer Mike Munchak.

After getting flagged four times against Chicago in Week 2 — the most by any NFL player in the past five seasons — Bolles disputed some of the penalties and suggested he was the victim of an undeserved reputation. That promoted backlash from coaches, teammates and even GM John Elway, who asked, "Does he know what holding is?"