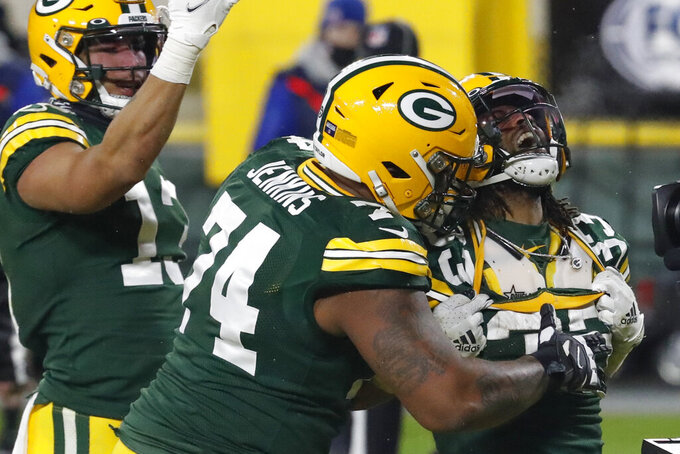 Not even the loss of All-Pro left tackle David Bakhtiari can slow a Green Bay Packers offensive line that has withstood adversity all season.

Yet the line hasn’t missed a beat while helping make the Packers the NFL’s highest-scoring team.

“Our attitude in the O-line room is just, ‘Next man up, step up, everybody’s got to prepare like they’re starting,’ because if you get thrown in in the middle of the game and you don’t know what you’re doing, you’re going to get exposed,” Linsley said. “And they’re going to keep coming at you. And that’s kind of how it works.”

That approach has been most evident since Bakhtiari suffered a season-ending knee injury in a Dec. 31 practice.

In Green Bay’s first game without Bakhtiari, the Packers scored touchdowns on their first three drives and gave up just one sack to win 35-16 at Chicago. They followed that by scoring on their first five possessions and allowing no sacks in a 32-18 divisional playoff triumph over the Los Angeles Rams, whose 53 regular-season sacks ranked second in the NFL.

After the Packers beat the Rams, All-Pro quarterback Aaron Rodgers called his offensive linemen “the stars of the game.”

“I don’t know if I got touched hardly at all the entire night, other than scrambling outside the pocket,” Rodgers said. “That was a fantastic performance by them. They dominated the line of scrimmage.”

“You never want to see anybody go down, especially a player of (Bakhtiari's) caliber,” Packers coach Matt LaFleur said. “But we are pretty fortunate that we have a lot of depth at that position, and the guys that have been asked to step in have done a hell of a job.”

Switching positions is nothing new for Turner. He has made six starts at right tackle and four each at left tackle and right guard this season.

“It’s one of those things that I’ve become accustomed to,” Turner said last week. “And don’t get me wrong, it’s not easy by any means. It’s not like it’s something that I prefer. But at the end of the day, if that’s what is necessary to help this team win games, that’s what I’m going to do every single time.”

This line faces one of its toughest tests of the season Sunday when the top-seeded Packers (14-3) host the Tampa Bay Buccaneers (13-5) in the NFC championship game.

Green Bay allowed five sacks in a 38-10 loss at Tampa Bay back on Oct. 18. The Packers rushed for 94 yards as a team that day, but Aaron Jones was limited to 15 yards on 10 carries.

Tampa Bay tied for fourth among all NFL teams in sacks (48) and ranked second in pressures per game (10.9) during the regular season. The Bucs’ defense should get a boost Sunday from the return of nose tackle Vita Vea, who hasn’t played since breaking his ankle Oct. 8 but has been activated from injured reserve.

The Bucs realize the success they had against Green Bay during the regular season doesn’t guarantee anything Sunday.

“It’s going to be a different ballgame,” Bucs linebacker Lavonte David said. “A lot is at stake right here, so we’ve definitely got to forget about what happened that game the last time we played them and focus on the right now.”

That performance against Tampa Bay was out of character for a Green Bay offensive line that otherwise has stood tall against virtually every challenge.

The Packers have allowed no more than one sack in 14 of their 17 games. After overcoming injury upon injury, these linemen want to make amends for one of their poorest performances of the season.

“The professionalism in the room is great,” offensive line coach Adam Stenavich said. “These guys, they’re all about one thing and that’s winning. How can we help this team win?”

NOTES: Starting cornerback Kevin King didn't practice Friday and is listed as questionable for Sunday's game with a back injury. ... Defensive lineman Kingsley Keke will miss a third straight game due to a concussion. ... The Packers spent part of their day Friday watching tape of their 37-20 loss at San Francisco in last season's NFC championship game. “I had to give myself a couple minutes before I came in here to gather my composure,” outside linebacker Rashan Gary said during his post-practice Zoom session. “Going back and watching that and just seeing what happened, it hurt."