Packers plan to start stars against Lions despite no stakes 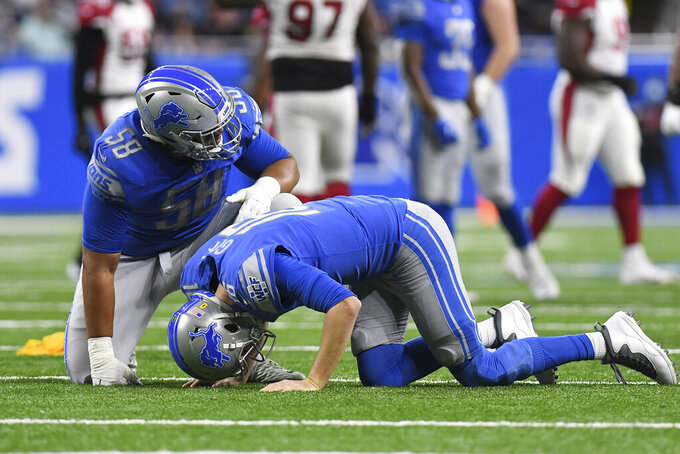 TURNOVER DIFFERENTIAL: Packers plus-16; Lions minus-7.

PACKERS PLAYER TO WATCH: WR Davante Adams: The 2020 All-Pro selection has 52 catches for 634 yards and eight TDs over his last six games. His 117 catches have broken the single-season franchise record he set last season. He has 1,498 yards receiving, closing in on the single-season team record of 1,519 set by Jordy Nelson in 2014. Adams is the fourth player in NFL history with 110 or more catches in three seasons.

LIONS PLAYER TO WATCH: WR Amon-Ra St. Brown. He's the first NFL rookie to have eight-plus catches in five straight games. The fourth-round pick can join Odell Beckham Jr. and Randy Moss as the three rookies in league history to have 90-plus yards receiving and a TD catch in four consecutive games. He has a franchise-record 82 receptions for a rookie and is 15 yards receiving away from breaking Roy Williams’ team record for a first-year player.

KEY MATCHUP: The Packers' run defense against Lions RBs D'Andre Swift and Jamaal Williams. Green Bay allowed just 27 yards rushing against the Vikings on Sunday night. If they can shut down Swift and Williams, a former Packer, that hurts Detroit's slim chances to pull off an upset.

KEY INJURIES: Packers QB Aaron Rodgers was held out of Wednesday's practice because of a toe injury, but the ailment has not slowed him in games. ... Green Bay’s offensive line is missing David Bakhtiari, Elgton Jenkins, Josh Myers and Billy Turner due to knee injuries. … Bakhtiari hasn’t played since tearing his left anterior cruciate ligament on Dec. 31, 2020. Bakhtiari and Myers were practicing on an individual basis Wednesday. … Packers CB Jaire Alexander (shoulder) hasn’t played since Oct. 3. … Green Bay OLB Za’Darius Smith (back) hasn’t played since the season opener. … Packers TE Robert Tonyan (knee) is out for the season. ... Lions QB Jared Goff was limited in practice on Wednesday because of a knee injury that kept him out of the last game after he missed the previous week because he was on the reserve/COVID-19 list. ... Detroit has three key players on the reserve/COVID-19 list: OTs Taylor Decker and Penei Sewell along with OLB Austin Bryant. ... WR Josh Reynolds, TE Brock Wright and OG Halapoulivaati Vaitai were removed from the reserve/COVID-19 list.

SERIES NOTES: The Packers have won five straight after Detroit won four in a row. ... In 1994, Green Bay beat the Lions twice in the playoffs in separate seasons. Brett Favre threw a 40-yard TD pass to Sterling Sharpe, who was wide open, in the final minute on Jan. 8, 1994 to give the Packers a 28-24 win at the Pontiac Silverdome. Green Bay led from start to finish in a 16-12 victory over Detroit on Dec. 31, 1994, at Lambeau Field.

STATS AND STUFF: The Packers have clinched the NFC’s No. 1 seed and the conference's only first-round playoff bye. … Packers coach Matt LaFleur said he still plans to play his regulars even though the game has no bearing on playoff positioning. ... LaFleur’s 39 regular-season victories are the most for an NFL coach in his first three seasons. Former San Francisco coach George Seifert won 38 games in the regular season from 1989 to 1991.… Rodgers has thrown 18 TD passes without an interception over his last six games. … Rodgers has thrown 50 TD passes and just eight INTs against the Lions in his career. … The reigning NFL MVP has a chance to be the first player to lead the league in passer rating in consecutive years since he did it during the 2011 and 2012 seasons. ... Packers RB Aaron Jones has scored seven TDs (three rushing, four receiving) in his last three games against Detroit. He is the NFL's only player with at least 1,100 yards from scrimmage and 10 TDs in each of the last three seasons. ... Packers OLBs Rashan Gary, a former Michigan star, and Preston Smith both have a chance to end the regular season with double digits in sacks. Gary has 9 1/2 sacks and Smith has nine. … Packers K Mason Crosby has missed only one of 10 FGs over his last five games after a midseason slump in which he missed 8 of 14 field goals. ... Packers WR Equanimeous St. Brown is Amon-Ra's older brother. ... Detroit is No. 31 in The Associated Press Pro32 NFL Power Rankings, ranking ahead of only Jacksonville (2-14), and one of those teams will have the No. 1 pick in the draft. ... The Lions showed signs of promise during a 2-3-1 stretch after their bye before dashing hopes of closing the season relatively strong by losing by 22 points against the Seahawks. ... Former Packers QB Tim Boyle had three interceptions at Seattle in his third career start. He also had career highs with 262 yards passing and two TD passes. ... Fifth-year LB Charles Harris has career highs with 7 1/2 sacks and 10 tackles for losses.