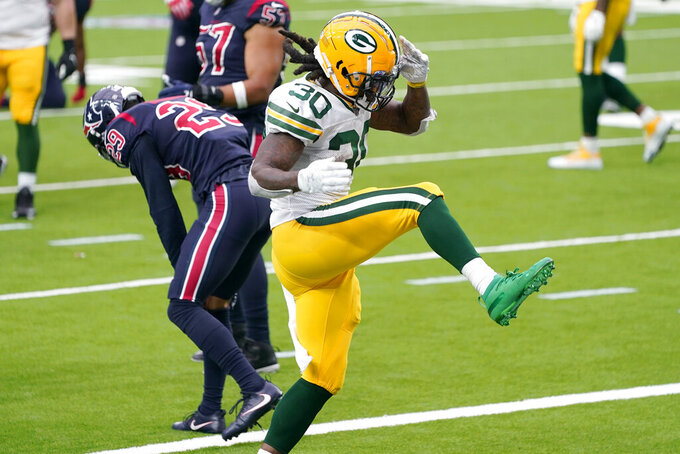 Green Bay Packers running back Jamaal Williams (30) celebrates after running for a gain as Houston Texans cornerback Phillip Gaines (29) is seen in the background during the second half of an NFL football game Sunday, Oct. 25, 2020, in Houston. (AP Photo/Sam Craft)

Green Bay’s Jamaal Williams understands the opportunities that could await him in the offseason, but he’s focusing on the present while teaming up with Aaron Jones to form one of the NFL’s top running-back tandems.

Williams showcased his array of talents Sunday as the Packers' offense didn’t miss a beat without Jones, who sat out a 35-20 victory over the Houston Texans with a calf injury. Williams ran for 77 yards, caught five passes for 37 yards and scored his first touchdown of the season.

“I love the grind,” Williams said Monday. “I love wearing down defenses from first quarter to fourth quarter and really just showing that mental strength we have as a team, let them know we’re going to keep battling and moving the ball and try to score every time we get the ball.”

The Packers will have plenty of tough decisions to make in the offseason with Pro Bowl offensive tackle David Bakhtiari, center Corey Linsley and cornerback Kevin King also potential free agents. The Packers selected Boston College running back A.J. Dillon in the second round of this year’s draft, giving them potential insurance if either Jones or Williams heads elsewhere.

NFL teams in need of a running back next season almost certainly will be watching the tapes of that Packers-Texans game closely to see if Williams might fit their profile.

“I’m really just taking every opportunity I can to show I can be a starting running back and I can show my potential and everything that I have to put on the field for the team,” Williams said. “I’m just trying to make sure that we come out with the (win) and be productive every time I touch the ball.”

The 2017 fourth-round pick from BYU has scored 16 career touchdowns. He rushed for at least 460 yards and caught at least 25 passes each of his first three seasons in the NFL. This year, Williams has rushed for 219 yards and also has 17 catches for 156 yards.

“I love the energy and juice that he brings to our football team,” Packers coach Matt LaFleur said. “It’s infectious. And I think it brings everybody kind of with him.”

That energy is evident even in the dance moves Williams often shows off during practice and in pregame warmups. But it perhaps was most apparent during one play in the opening series of Sunday’s game.

Williams caught a pass across the middle and then absorbed a helmet-to-helmet hit at the end of his 17-yard gain. Williams actually lost his helmet as he went down, but he got right back up, pumped his arms and shouted as he nodded his head vigorously a few times.

Green Bay reached the end zone on that drive and led the rest of the way.

“I’m really just having fun,” Williams said. “How can I say it? I’m just excited for all plays that I do well on and just team plays that we all do well on, but on certain plays when I get those opportunities to just go out and do what I can to help our team get first downs or get those large chunks of plays, you know what I mean, it just gets me excited. I’m just trying to get the juice going for the team, but just do it in my way, just being me out there.”

The Packers want Williams to keep being himself. When he’s having fun, the team’s usually having success.

“Jamaal is such an important part of our team in so many facets,” quarterback Aaron Rodgers said after Sunday’s game. “Not just the physical, on-the-field stuff you see, where he’s extremely talented. … He obviously brings so much outside of the physical — the energy, the swag, the dancing moves that we all can try and copy or marvel at. He’s an important, important part of what we’re doing.”