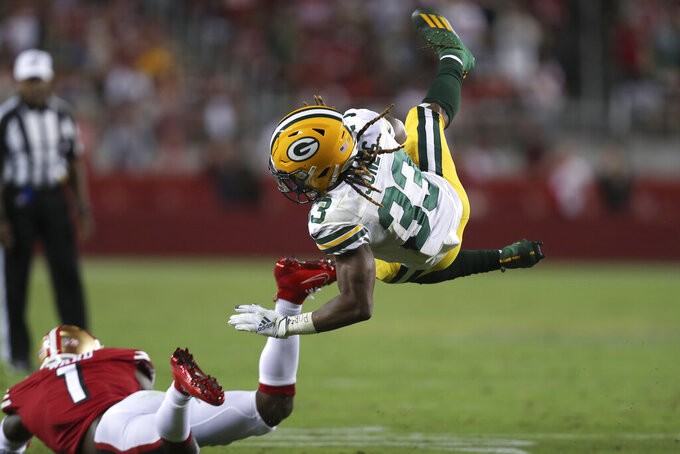 OPENING LINE: Packers by 6 1/2, according to FanDuel SportsBook.

TURNOVER DIFFERENTIAL: Steelers minus-1; Packers plus-1.

STEELERS PLAYER TO WATCH: RB Najee Harris. The rookie has been Pittsburgh’s best — and sometimes only — semi-reliable offensive option through three weeks. While the running game ranks dead last in the league thanks in large part to the offensive line, offensive coordinator Matt Canada is trying to find ways to get Harris the ball in space. Harris’ 20 receptions are tied for 10th most in the NFL and tops among running backs.

PACKERS PLAYER TO WATCH: WR Davante Adams. Over his last two games, Adams has caught 20 passes for 253 yards. He has 2 ½ times as many receptions and over four times as many yards receiving as any of his teammates.

KEY MATCHUP: Packers offensive line vs. Steelers pass rush. The Packers essentially used their third-string left tackle in Yosh Nijman against the 49ers because injuries sidelined All-Pro David Bakhtiari and Elgton Jenkins. An ankle injury makes Jenkins’ status for Sunday uncertain. The Packers’ line also features two rookies in center Josh Myers and right guard Royce Newman. The Steelers saw their NFL-record streak of 75 consecutive games with a sack end in the loss to the Bengals with All-Pro edge rusher T.J. Watt out of the lineup due to a groin injury

KEY INJURIES: Watt and Steelers LB Alex Highsmith, who also sat out last week with a groin injury, could return to the lineup. … Steelers WR Diontae Johnson could also return after injuring his knee on the final play of a Week 2 loss to Las Vegas. … Steelers RT Chuks Okorafor is in the concussion protocol. ... Jenkins could be a game-time decision for the Packers. … Packers CB Kevin King is in concussion protocol. … Packers WR Marquez Valdes-Scantling injured his hamstring at San Francisco. … Bakhtiari will miss at least the Packers’ first six games as he recovers from a torn anterior cruciate ligament. … Green Bay OLB Za’Darius Smith will miss a third straight game due to a back issue.

SERIES NOTES: The Steelers have won each of their last five regular-season matchups with Green Bay. The Packers’ only win during that stretch was a big one. Green Bay’s last Super Bowl victory was a 31-25 triumph over Pittsburgh on Feb. 6, 2011. The starting quarterbacks in Sunday’s matchup – Green Bay’s Aaron Rodgers and Pittsburgh’s Ben Roethlisberger – also faced each other in that Super Bowl. … This marks the first time Rodgers has faced the Steelers since that Super Bowl matchup. The Steelers beat Packers teams quarterbacked by Matt Flynn in 2013 and Brett Hundley in 2017. Rodgers was out with a broken collarbone for both those games.

STATS AND STUFF: Roethlisberger’s next touchdown pass will make him the eighth QB in NFL history to reach 400 in his career. Rodgers is seventh all-time with 418 touchdown passes. ... The Steelers are having trouble protecting the 39-year-old Roethlisberger. He’s already been sacked eight times in 138 dropbacks this season. He was sacked just 13 times in 614 dropbacks a year ago. ... Harris’ 14 receptions last week against Cincinnati set a franchise record for receptions in a game by a running back. ... Pittsburgh’s offense is only part of the problem for the Steelers. The defense is allowing 7.2 net yards per passing attempt. That’s a significant uptick from 2020, when opponents averaged just 5.3 yards per attempt, third lowest in the league. ... While Roethlisberger is the second-oldest starting quarterback in the league behind Tom Brady, Pittsburgh’s roster is young. Rookies have combined for 12 starts through three weeks, the second-highest total in the NFL behind the winless New York Jets. … Packers K Mason Crosby has made 22 straight field-goal attempts, one off his franchise record. He made 23 straight from 2010-11. Crosby’s 51-yarder as time expired enabled the Packers to beat the 49ers. … Packers RB Aaron Jones has scored 35 total touchdowns since 2019. The only NFL player with more touchdowns during that stretch is Tennessee’s Derrick Henry with 38. … Steelers head coach Mike Tomlin and Packers defensive coordinator Joe Barry worked together on Tampa Bay’s staff from 2001-05. That included a Super Bowl-winning season in 2002.

FANTASY TIP: Although Harris has averaged just 3.1 yards per carry and has scored only one touchdown thus far in his rookie season, he remains worth starting in leagues that award players one point per reception. Harris has 19 catches over his last two games, including 14 against Cincinnati. His lone touchdown came on a reception.