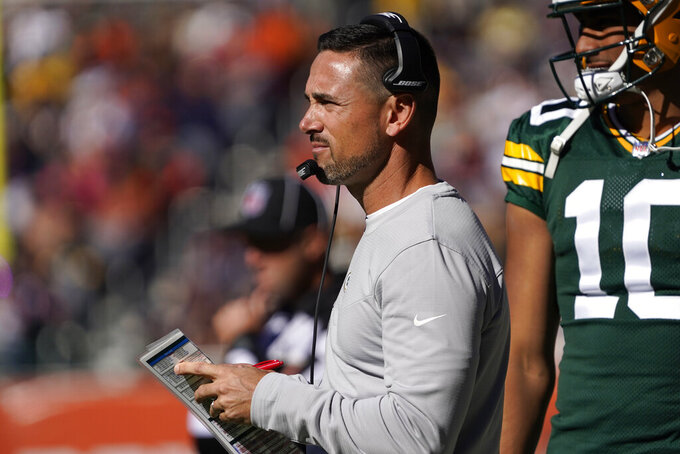 Green Bay Packers head coach Matt LaFleur watches from the sidelines during the second half of an NFL football game against the Chicago Bears Sunday, Oct. 17, 2021, in Chicago. (AP Photo/David Banks)

OPENING LINE: Packers by 8 1/2, according to FanDuel SportsBook.

TURNOVER DIFFERENTIAL: Washington minus-2; Packers plus-4.

WASHINGTON PLAYER TO WATCH: QB Taylor Heinicke grew up idolizing Brett Favre, so playing at Lambeau Field means something to him. Heinicke has nine touchdowns and six interceptions since replacing injured starter Ryan Fitzpatrick in the season opener, and the coaching staff needs him to be more precise throwing the ball.

PACKERS PLAYER TO WATCH: QB Aaron Rodgers has thrown 12 touchdown passes with only one interception during the Packers’ five-game winning streak. The reigning MVP also has run for a touchdown in two of Green Bay’s last three games.

KEY MATCHUP: Packers offensive line vs. Washington defensive line. Washington’s starting defensive line features four former first-round draft picks in Chase Young, Daron Payne, Jonathan Allen and Montez Sweat. But even with those guys up front, Washington ranks just 20th in the NFL in sacks per game and is last in the league in scoring defense and pass defense. Washington must put pressure on Rodgers to have any shot at pulling the upset.

STATS AND STUFF: Washington has lost two in a row. ... Heinicke was 24 of 39 for 172 yards, a TD and an INT against Kansas City. ... Counting the wild-card round of the playoffs last season, Heinicke will be making his seventh career NFL start. ... RB J.D. McKissic would get the bulk of the work if Gibson cannot play. Rookie Jaret Patterson is next on the depth chart. ... McLaurin has at least four catches in each of the first six games this season. ... Seals-Jones has nine catches for 99 yards and a TD since taking over for injured starter Logan Thomas. ... Young had 1 1/2 sacks over his past two games after getting none in his first four. ... LB Cole Holcomb had 10 tackles and a forced fumble against the Chiefs. ... CB Kendall Fuller and S Bobby McCain intercepted KC QB Patrick Mahomes last week. ... Washington cut longtime K Dustin Hopkins after his second missed field-goal attempt of the season and replaced him with 26-year-old Chris Blewitt, who has never kicked in an NFL game. … This is the Packers’ lone home contest in a five-game stretch. They won at Cincinnati and at Chicago the last two weeks. They follow this game with consecutive trips to Arizona and Kansas City. … This is the third straight year that the Packers have won five of their first six games. … Packers WR Davante Adams leads the NFL with 668 yards receiving. His 46 catches put him in a tie for first place with Cooper Kupp of the Los Angeles Rams and Tyreek Hill of Kansas City. … Green Bay is 15-2 in regular-season home games during Matt LaFleur’s three-year coaching tenure. … Packers president/CEO Mark Murphy played for Washington from 1977-84 and was a co-captain from 1980-84. … LaFleur was Washington’s quarterbacks coach from 2010-13. … Packers defensive coordinator Joe Barry had the same job with Washington from 2015-16.

FANTASY TIP: McKissic is worth picking up if he's still on your league's waiver wire. He should have the ball in his hands quite often if Gibson is unavailable.