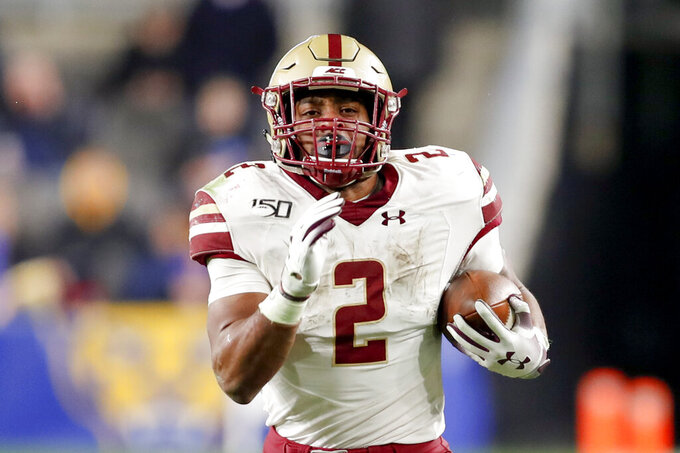 FILE - In this Nov. 30, 2019, file photo, Boston College running back AJ Dillon (2) runs over 50 yards for a touchdown against Pittsburgh during the second half of an NCAA college football game in Pittsburgh. Dillon was selected by the Green Bay Packers in the second round of the NFL football draft Friday, April 24, 2020. (AP Photo/Keith Srakocic, File)

The Green Bay Packers have stayed on offense throught the first two days of the NFL draft, a major change from their usual strategy.

One day after trading up four spots in the first round to take Utah State quarterback Jordan Love with the 26th overall pick, the Packers added Boston College running back A.J. Dillon in the second round and Cincinnati tight end Josiah Deguara in the third round Friday night.

Before this season, the Packers hadn’t used a first-round pick on offense since taking Mississippi State tackle Derek Sherrod at No. 32 overall in 2011. The Packers went with defense with their first two picks last year, their first three draft choices in 2018 and their first four selections in 2017.

“It was just naturally a very strong offensive draft this year," general manager Brian Gutekunst said. “Certainly where our team sits right now, I thought that was probably where we'd like to make some investments, into the offense. We certainly did a lot on defense over the past couple of years."

Although he was one of the busiest running backs in college football with 845 carries in his three years at Boston College, Dillon emphasized he's “good to go" and “healthy as can be" even after such heavy usage.

“I had a lot of carries, but that just goes to show I can handle the workload, I can be the workhorse," Dillon said. “Everyone can know the ball's coming to me, and I can still grind out yards.''

The Packers clearly drafted with an eye on the future when they moved up to take Love, a talented but unpolished quarterback who figures to spend at least the next couple of seasons behind Aaron Rodgers on the depth chart.

Gutekunst said he has spoken with Rodgers since drafting Love. Gutekunst declined to discuss the specifics of the conversation but called Rodgers a “true pro" and said he didn't expect the decision to draft a quarterback in the first round to cause a problem with the two-time MVP.

The selection of Dillon also doesn’t necessarily seem to fill an immediate need. Green Bay already has Aaron Jones, who rushed for 1,084 yards and 16 touchdowns last season. Jamaal Williams is a capable complementary back.

But running back could be a major concern a year from now, as both Jones and Williams are potential free agents in 2021. At least for now, the Packers believes all three backs should work well together.

“That's a three-headed beast that can come in and take this running game to the next level," Packers college scout Mike Owen said. “You've got a nice mixture of running styles. Aaron Jones is more like lightning and you've got the thunder with A.J. Dillon and Jamaal Williams.”

Owen noted that Dillon's physical running style at 6 feet and 247 pounds will enable him to wear defenses down particularly when the weather gets colder. Dillon noted that he's accustomed to playing in cold weather after playing high school and college football in the state of Massachusetts.

Dillon had only 21 career catches at Boston College, though he said that was mainly because he played in a run-oriented offense.

“I'd say I'm for sure an all-purpose back, somebody who can do everything - run the ball, catch and obviously protect the quarterback," Dillon said.

The 6-foot-2 Deguara, picked 94th overall, caught 12 touchdown passes over the last two seasons. He had 39 receptions for 504 yards and seven touchdowns in 2019.

This marks the second straight year the Packers have used a third-round pick on a tight end after taking Texas A&M's Jace Sternberger at that spot last year. Gutekunst said Deguara also has the ability to play other roles such as H-back and fullback.

“Whatever the team needs me to do, I'm willing to do," Deguara said. “I showed in college, I'm able to do a lot of different things. I'm just excited to got to work.”

The Packers have six more picks Saturday as they seek to boost a roster that helped them go 13-3 and reach the NFC championship game last season. They traded their fourth-round pick to acquire Love but still have one pick in the fifth round, three in the sixth and two in the seventh.

Their most apparent remaining needs are adding a wideout to complement three-time Pro Bowl selection Davante Adams and finding some inside linebackers and linemen to shore up a run defense that ranked 23rd in the NFL last season.

This story has been updated to correct the spelling of Deguara.