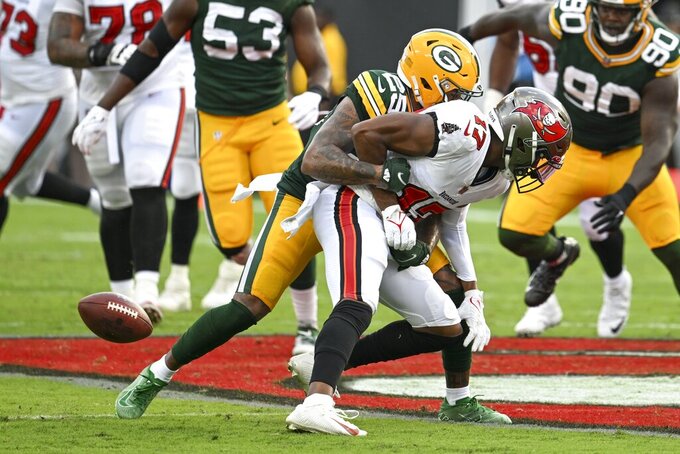 GREEN BAY, Wis. (AP) — When the Green Bay Packers have forced at least one turnover during Matt LaFleur’s coaching tenure, they nearly always have won the game.

The problem is they aren’t producing enough takeaways yet this season and they're off to their worst five-game start since LaFleur’s arrival in 2019. The Packers (3-2) will try to correct that problem Sunday when they host the New York Jets (3-2).

“Those will come in bunches,” safety Adrian Amos said. “And they’re going to come soon.”

The Packers have thrived on taking the ball away and protecting it on offense since LaFleur arrived as coach in 2019. The Packers’ plus-32 turnover margin from 2019-21 led all NFL teams during that stretch.

Green Bay owns a 37-1 regular-season record under LaFleur when it produces at least one takeaway, the exception coming in a 34-31 overtime loss at Indianapolis on 2020. The Packers did intercept Tom Brady three times when they lost to the Tampa Bay Buccaneers in the NFC championship game that closed their 2020 season.

The Packers are 30-0 when they have produced more takeaways than their opponent in regular-season games LaFleur has coached.

But the Packers have committed more turnovers (seven) than they’ve forced (four) so far this season. Their minus-3 turnover margin ranks 28th out of 32 NFL teams, ahead of only the Los Angeles Rams, Indianapolis, Washington and New Orleans.

“We know it’s an important part of this game, and when you’re sitting at minus-3 for the year, that’s not good,” LaFleur said. “We have yet to win the turnover battle in any of these games.”

Part of the problem is that the Packers aren’t taking care of the ball as well as usual.

Aaron Rodgers has been picked off three times, one off his season total from last year when he threw 37 touchdown passes with only four interceptions to earn his second straight MVP award. The Packers also have lost four fumbles, two from Rodgers and one each from Romeo Doubs and Aaron Jones.

The bigger issue is on the other side of the ball.

Only Las Vegas and Washington have produced fewer takeaways than Green Bay. Kansas City and Miami have joined the Packers in forcing only four turnovers.

“It gets pretty frustrating because we work so hard throughout the week and in camp for those moments,” cornerback Jaire Alexander said. “When they haven't been here like they normally are, that's a little frustrating.”

Last year, the Packers tied for eighth place with 26 takeaways and were third in the league with a plus-13 turnover margin.

After compiling 18 interceptions last season to tie for sixth place in the league, Green Bay’s defense has picked off one pass this season. That came from Alexander with just over two minutes left in a 27-10 victory over the Chicago Bears.

“We’re going to make our plays, I feel like anytime now,” safety Darnell Savage said. “It’s just one of those things. You’ve just got to be patient, just do your job and you’re your plays will come to you. We’re not worried. I think we’ll have plenty of turnovers by the time it’s all said and done.”

“An offense isn’t just going to turn the ball over,” Barry said. “You have to create those. You have to physically take the ball. We’ve got to keep chopping wood and they’ll come.”

And once they start coming, Barry believes they won’t stop.

“Takeaways happen in droves,” he said. “They really do. Every year that I’ve ever been a part of having a great takeaway year, which we did last year, they come in packs.”