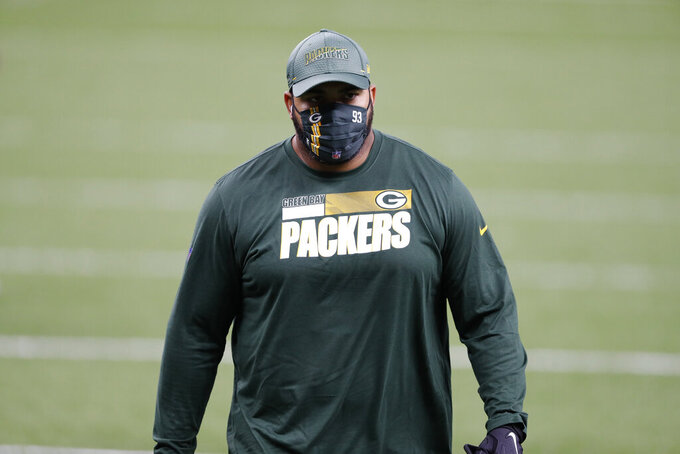 FILE - In this Sept. 27, 2020, file photo, Green Bay Packers defensive lineman Billy Winn warms up before an NFL football game against the New Orleans Saints in New Orleans. Winn encountered all kinds of adversity before making one of the NFL’s most improbable comebacks this season. Yet he could always look inside his own home for inspiration. Whenever he wanted to feel sorry for himself over his misfortune with injuries, Winn only needed to witness his wife’s battle with lupus to understand he had it comparably easy. (AP Photo/Tyler Kaufman, File)

He found inspiration inside his own home.

Whenever he wanted to feel sorry for himself over his misfortune with injuries, Winn only needed to witness his wife’s battle with lupus to understand he had it comparatively easy.

“Anytime I come home and am like, ‘Oh this hurts,’ I try to keep it to myself,” Winn said, “because at the end of the day I know what she’s going through, and it’s 100 times worse than what I’m going through.”

Winn’s return to the NFL is a testament to the power of perseverance. He has appeared in three games for Green Bay, which marks his first regular-season NFL action since Jan. 1, 2017.

He overcame back issues to play all 16 games with the Denver Broncos in 2016, which marked his fifth season in the NFL after stints with the Indianapolis Colts and Cleveland Browns. Then the 2012 sixth-round draft pick from Boise State ran into all sorts of bad luck.

Winn suffered a brutal injury to his right knee when he got caught under the pile while defending a run in an exhibition game. That injury knocked him out for the entire 2017 season, and he couldn’t catch on with any team as he tried making a comeback.

He returned to the Broncos in 2019, but a preseason triceps injury knocked him out for the year once again.

“It’s just always been a constant battle, always battling demons and stuff like that,” Winn said. “But I always reflect back on just my perseverance and my dealing with adversity. Everyone’s going to deal with it. It’s how you go about it and how you overcome those things that really define who you are as a character.”

Winn started thinking about life after football and was keeping tabs on job opportunities in various college athletic administrations.

A pep talk from his wife, Brooke, caused him to give it one more shot. She asked him if he really wanted to have his career end because of an injury.

“Just having her by my side every single day, driving me and pushing me to keep going, making sure I’m on top of my diet, making sure I’m on top of my cardio, that was just a real deciding factor,” said Winn, who has been married for three years. “She was like, ‘You know what? I don’t think you’re done. You need to keep going.’ I said, ‘You know what? You’re right. I can do this.’ So I just kept going.”

Winn’s opportunity came after Green Bay signed him to its practice squad on Sept. 16. Eleven days later, he tipped a pass by Drew Brees to help the Packers beat New Orleans in his first regular-season appearance since the 2016 season.

He was elevated from the practice squad for games with New Orleans and Atlanta before getting signed to the 53-man roster Saturday, one day before the Packers' 35-20 victory at Houston. Winn has played a total of 23 defensive snaps and nine more on special teams heading into Sunday's game with the Minnesota Vikings.

The move reunites him with Packers defensive coordinator Mike Pettine, who was Cleveland’s head coach in 2014 during Winn’s final season with the Browns.

“I saw the list that he was coming in for the workout, and I was like, ‘Is that, is that the Billy Winn? The same Billy Winn that I know?’" Pettine said. “And I knew he had been out for a stretch. It’s just a credit to him, somebody that just goes through what he went through from an injury standpoint, just being able to work themselves back into shape and essentially will themselves onto an NFL team.”

Winn credits his wife for giving him that will power, drawing motivation from her struggles with lupus, an autoimmune disease that causes inflammation and pain throughout the body. Those with lupus are also more susceptible to the novel coronavirus.

“The constant battle that she deals with every day, it's really hard to see just because, especially with COVID going around,” Winn said. “We’re cleaning the house daily. We’re making sure that we’re keeping her fevers under control where she’s spiking, 100, 101 every day. And then just the overall body pain for her is just a maintenance thing every single day. My worst days are normal days for her."

Winn says his wife’s health issues helped him put his own injuries in perspective. Now they’re both celebrating his return to the game.