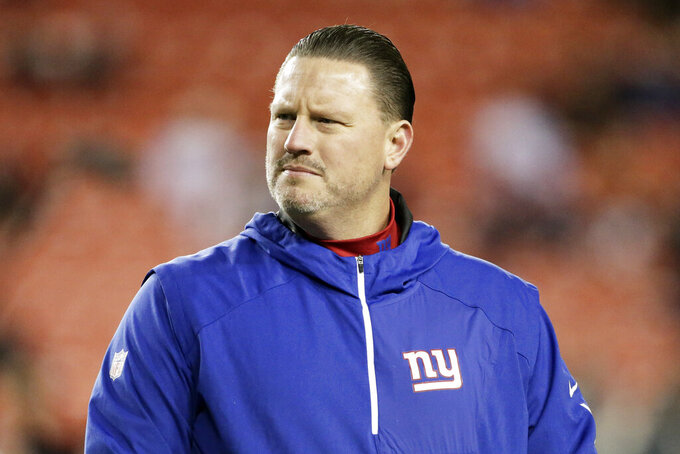 FILE - New York Giants coach Ben McAdoo stands on the field before the team's NFL football game against the Washington Redskins in Landover, Md., Nov. 23, 2017. The Carolina Panthers are hiring former New York Giants head coach Ben McAdoo to be their new offensive coordinator, according to a person familiar with the situation. The person spoke to The Associated Press on condition of anonymity Friday, Jan. 21, 2022. because the team is still finalizing the details of the contract. (AP Photo/Mark Tenally, File)

The Associated Press reported last week that the team has settled on McAdoo to replace Joe Brady, who was fired late in the regular season with the offense struggling to produce points.

McAdoo has 15 years of NFL coaching experience, including two seasons (2016-17) as the Giants head coach. He previously worked as the Giants offensive coordinator alongside Eli Manning and as the Green Bay Packers quarterbacks coach with Aaron Rodgers. The Giants passing offense finished in the top 10 in the league in its two seasons with McAdoo as coordinator.

McAdoo spent this past season with the Dallas Cowboys working as a consultant.

Panthers coach Matt Rhule, who is 10-23 in two seasons in Carolina, and McAdoo have both worked with former Giants coach Tom Coughlin in the past.

The 44-year-old McAdoo becomes the first assistant coach Rhule has hired to his staff with NFL head coaching experience.

McAdoo replaces Brady, who was considered a rising star in the coaching ranks when arrived in Carolina after helping LSU win a national championship as the Tigers' passing game coordinator. But Brady's lack of experience at the NFL level proved costly, and he and Rhule often didn't see eye to eye with their offensive philosophies.

The Panthers finished 30th in the league in offense and went 5-12.

Sam Darnold struggled last season and Cam Newton was 0-5 as a starter. Darnold is under contract next season, while Newton will be an unrestricted free agent.

It's expected the Panthers will make a push to sign an experienced NFL quarterback or possibly trade for one this offseason in an effort to upgrade the position. Carolina also holds the sixth pick in the draft.