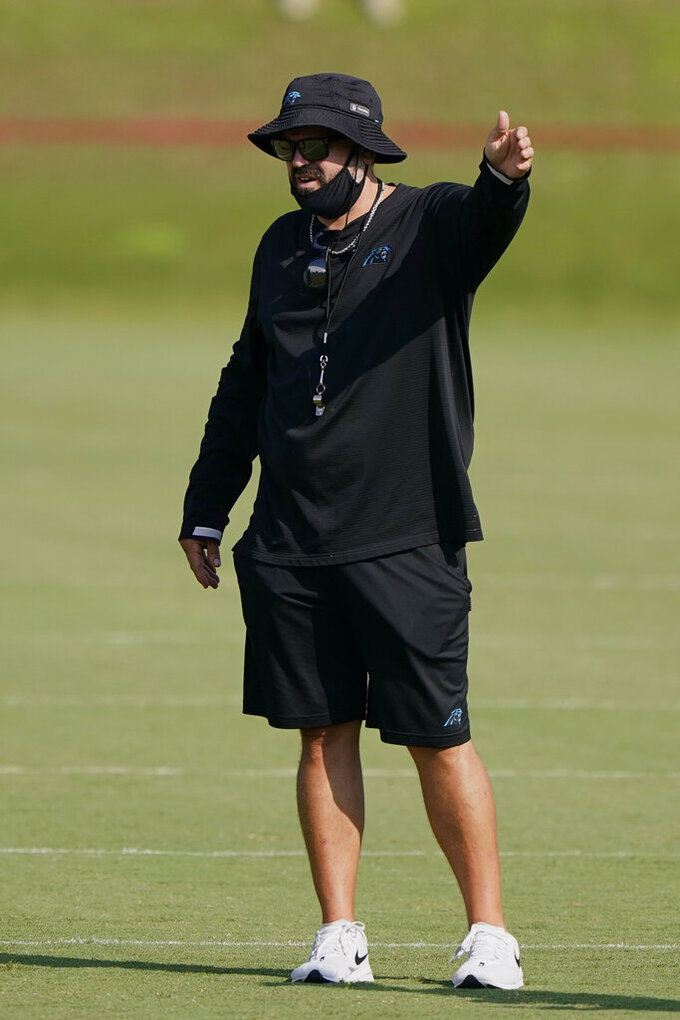 Then he walked over to the blocking dummy and aggressively demonstrated the technique he was looking for from his linemen. In a flash, the intensity picked up as practice quickly resumed.

“I don’t know what came over me,’’ Rhule said. “At least I didn’t get hurt. That was the positive thing.’’

Team meeting rooms. The weight room. On the practice field, it doesn’t matter.

The 45-year-old Rhule is quickly establishing a culture in Carolina and players are already buying in, even though the team hasn’t played a game yet for the former Baylor coach.

“It is definitely contagious," Bridgewater said of Rhule's energy. "He’s screaming, he’s loud, he’s running around, he’s hollering. Sometimes he talks too much," the QB added with a laugh.

"But he is a great motivator and right now he's getting the best out of everyone.”

The energy was evident in Rhule's first two practices in front of reporters, including the squad's first padded session.

His practices move at a frantic pace with mostly rap music blaring in the background. When he doesn't like something he sees from players he'll stop the practice — and the music — and let them know about it. If the defense makes a mistake they're sent to the ground for push-ups with Rhule often flopping to the ground and joining in.

Rhule and his staff are heavily involved in the teaching process of what is an extremely young team in the midst of a rebuilding process. It's not unusual to see a defensive backs coach running alongside a cornerback while in coverage and shouting instructions on how to defend the wide receiver as the play develops. The line coaches won't hesitate to grab a jersey to demonstrate technique.

The hands-on approach is not unusual for Rhule, who played linebacker at Penn State under Joe Paterno.

He once donned a set of pads and a helmet and joined his players at practice while serving as head coach at Temple.

“I remember looking at him, like, ‘Hey, this guy is crazy,’” said Panthers linebacker Tahir Whitehead, who played under Rhule with the Owls. “I forget which guy he was going up against, but I would say he was probably about twice Matt’s size. Matt says he didn’t care. It was like, ‘we’ve got to show you guys how to get going.’”

Rhule joked that he won't be doing that again at the NFL level.

“These guys are way too fast and explosive,” Rhule said with a laugh. “Not a chance.”

“The great thing about coach is he's right down there in it with us,” Bridgewater said.

If practice isn't moving along fast enough, players and coaches will hear about it from Rhule. He's not a stickler for long practices, saying he prefers shorter ones as long as the tempo is fast and upbeat.

“If you came to our Baylor practice, it would have been 10 times faster because we weren’t in the huddle,” said Rhule, who spent the past three years coaching the Bulldogs.

“Sometimes (offensive coordinator) Joe Brady kind of laughs at me because I get a little antsy. ’Get the play in and go!' I don’t want practice to ever feel like drudgery. Let’s rock! Let’s go!”

Safety Juston Burris said one of the reasons he signed with Carolina this offseason is because he heard players who played for Rhule were willing to “run through a brick wall for him."

He believes it now.

“From the first week you could tell that he is a man who commands a room and commands respect,” Burris said.

Bridgewater feels it every day, and loves what he sees.

“We are bringing that energy and feeding off coach’s energy,” Bridgewater said. “From the time you finish that stretching period you have to turn that switch on.”

In other words, Rhule expects his players to match his energy.

“That’s always been the type of guy he is, and that’s why I’ve always respected him,” Whitehead said. “What he asks and requests from you is all you can give, all your energy and everything and go 100 miles (per hour) on the field. And he does the exact same thing.”

Rhule is in the process of developing relationships with his players, many of whom he is still getting to know in person after an virtual offseason filled with Zoom meetings and distance learning.

On Monday, he let players who have children come in late so they could be there with their kids for their first day of school, even though many in the Charlotte area are operating on remote learning because of the coronavirus.

But when players are in the building, Rhule is expecting their best and hasn't been shy about calling out players if they make a mistake in practice.

And Burris said that's just fine by him.

“Hey we’ve got a bunch of guys in this group that don’t want to be coddled,” Burris said. “We want to win. We have a coach we believe in. He has a formula and we’re following behind that.”