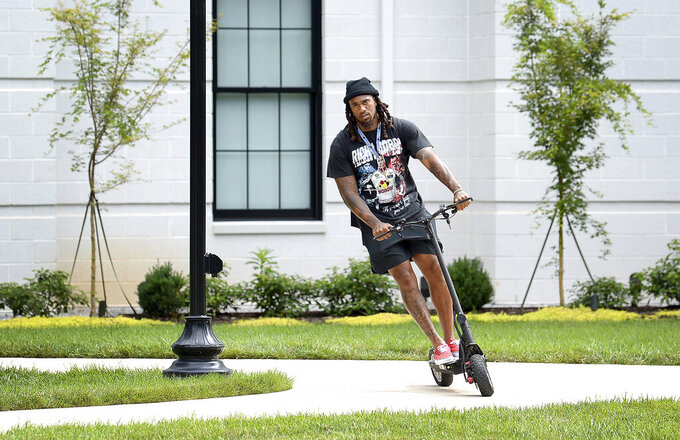 SPARTANBURG, S.C. (AP) — Sam Darnold wasn’t willing to divulge whether he’s been vaccinated against the coronavirus as the Carolina Panthers reported to training camp.

Instead, Carolina’s new starting quarterback said his focus is on making “smart decisions” on the field as he tries to resurrect his NFL career after going 13-25 in three seasons in New York, prompting the Jets to trade him to the Panthers.

“People outside looking in can say there is a lot of pressure on (me) and he’s got to win — and that’s true,” Darnold said. “But at the end of the day it’s me going out and doing everything I can today to get better.”

The 24-year-old Darnold said on a Zoom call last month that he hadn’t been vaccinated, adding that he “still has to think about all those certain things that go into it.”

He did not wear a mask Tuesday as he stood a few feet from reporters answering questions.

A Panthers spokesman wouldn’t say if Darnold had been vaccinated, but confirmed to The Associated Press that unvaccinated players are required to wear a mask while conducting interviews with the media.

Darnold said the new league protocols on testing that were recently put in place — ones that could result in teams with COVID-19 outbreaks having to forfeit games — didn't affect his decision.

Panthers coach Matt Rhule is encouraged that more than 85% of his players are vaccinated, making Carolina one of the most highly vaccinated teams in the league.

“There is no doubt that being vaccinated helps our team,” Rhule said. “The more guys that are vaccinated, the closer we can be in meetings and the more we can be around each other. But at the end of the day it’s everyone’s personal decision.”

On the field, Darnold inherits an offense with considerably more talent than he had to work with in New York.

Although the Panthers have questions at left tackle, they feature a pair of 1,000-yard receivers in D.J Moore and Darnold’s former Jets teammate Robby Anderson, a new weapon at tight end in Dan Arnold and 2019 All-Pro running back Christian McCaffrey, who said he's healthy after missing 13 games last season due to injuries.

Darnold seems focused on the task at hand.

He’s been at the stadium almost every day before 7 a.m. lifting weights, watching game film and learning offensive coordinator Joe Brady’s playbook. He’s worked extensively with quarterbacks coach Jordan Palmer on his footwork, hoping to eliminate throwing off his back foot.

“There are times when he’s looked really, really good and you’re like, ‘Wow, he’s making a lot of progress,’” Fitterer said. “And then you throw something new at him and it catches him off guard. But then he changes the next day and doesn’t make that same mistake, which is really good to see.”

McCaffrey has been impressed with what he’s seen from Darnold, who replaced Teddy Bridgewater as the team's starting QB.

He said Darnold has talked with his teammates to get a feel for their strengths on the field.

“He’s a great leader and he knows exactly who he is and knows how to get the best out of the people around him,” McCaffrey said. “I think his poise is something that is important at the quarterback position. He doesn’t get too high or too low and that is something that we feed off of.”

Who will protect Darnold’s blind side remains a question.

The Panthers are hoping free agent pickup Cam Erving can be the answer at left tackle, but Rhule said he hasn’t ruled out moving right tackle Taylor Moton to the left side. Moton, who recently signed a four-year contract extension worth more than $71 million, will start camp at right tackle but will get some reps at left tackle, Rhule said.

The Panthers began filing in to Wofford College on Tuesday morning in preparation for a training camp that will include joint practices with both the Indianapolis Colts and Baltimore Ravens over the next three weeks.

Some were apparently too eager to get there.

New Panthers linebacker Denzel Perryman showed reporters a speeding ticket from earlier in the morning when he was clocked driving 91 mph in South Carolina, leaving him subject to a $350 fine and six points against his driver’s license.

“That’s the way my morning started off,” Perryman said.

The Panthers placed linebacker Frankie Luvu on the COVID-19 reserve list and safety Lano Hill on the physically unable to perform list.