Panthers have options at No. 8 pick, including trading down 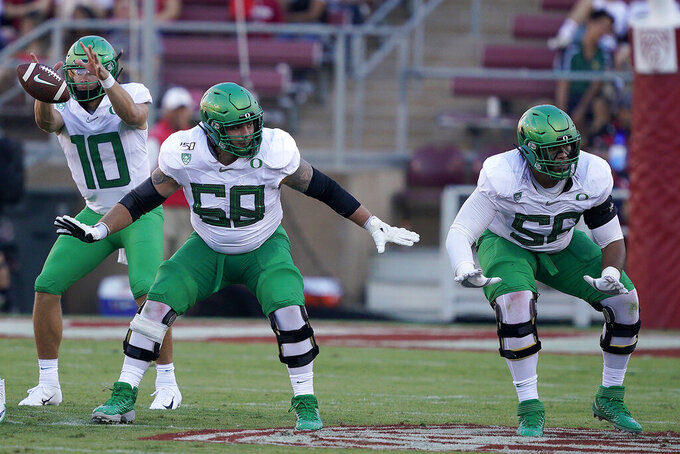 FILE - In this Sept. 21, 2019, file photo, Oregon offensive linemen Shane Lemieux (68) and Penei Sewell, right, block for quarterback Justin Herbert (10) against Stanford during the first half of an NCAA college football game in Stanford, Calif. The acquisition of Sam Darnold via trade earlier this month has given the Carolina Panthers more options with the No. 8 pick in the NFL draft. Carolina's most pressing need entering the draft is at left tackle, a position they have failed to solidify over the last seven seasons. That means 6-foot-6, 330-pound Sewell and 6-foot-3, 305-pound Rashawn Slater from Northwestern could be in play if either is around at No. 8. (AP Photo/Tony Avelar, File)

CHARLOTTE, N.C. (AP) — The acquisition of Sam Darnold earlier this month has given the Carolina Panthers more options with the No. 8 pick in the NFL draft and raised the real possibility of the team trading down.

With Darnold in the fold, the Panthers no longer feel compelled to select a quarterback with the eighth pick, although that certainly remains an option should someone like Ohio State’s Justin Fields fall. Along with Darnold, the Panthers have also addressed every obvious need with at least one player in free agency, so they can go any number of other directions at No. 8 including offensive tackle, cornerback or even wide receiver.

It also puts them in a position to trade down.

Panthers general manager Scott Fitterer says he’s “very open” to the idea of trading back and restocking some of the draft capital he lost by trading a 2021 sixth round pick and second and fourth round picks in 2022 to the Jets for Darnold.

Fitterer said Friday the Panthers have fielded calls from five teams potentially interested in moving up to No. 8.

If a player like Fields falls to eight, it could increase the Panthers' asking price for a QB-needy team like the Broncos (No. 9), Eagles (No. 12) or Patriots (No. 15) to move up.

“We will look at the players available when we pick and how many of those players we feel can help us and how far we can go back for one those players without trading out of a level,” Fitterer said.

Fitterer said the Panthers have first-round grades on 16 players, so it would seem unlikely they would trade down lower than the mid-teens.

Fitterer has spent his NFL career with the Seahawks, an organization known for trading down.

"It doesn’t take us out of taking a quarterback, it doesn’t take us out of taking any position," Fitterer said of the Darnold acquisition. ”What we wanted to do going into this draft, through free agency, through this trade with Sam, was to just get rid of all the needs we have. ... This puts us in a position to make the right football decision for this team moving forward."

Carolina's most pressing need entering the draft is at left tackle, a position they have failed to solidify over the last seven seasons. Since Jordan Gross retired following the 2013 season, the Panthers have used 10 different players at left tackle with only limited success.

The 6-foot-6, 330-pound Penei Sewell from Oregon would be a great fit if he were to get past the Cincinnati Bengals at No. 5. If the Panthers don't address offensive tackle in the first round look for them to take one in the second round, which Fitterer believes should be pretty well stocked with quality tackles.

Tight end is another area of need at No. 8 but Florida's Kyle Pitts will likely be off the board. Don't rule out Carolina taking a player like Alabama cornerback Patrick Surtain II or LSU wide receiver Ja'Marr Chase if they're still around.

Coach Matt Rhule said team's philosophy is to take the best available player in the first round and then draft for need in the rounds that follow.

“If two guys are close on your board (with the first pick) you maybe take the guy who fits the need,” Rhule said. “But if you look back at Brian Burns or Luke Kuechly or Thomas Davis, do you care really what number they went or who went around them? The key is you got a great player. We are just trying to find guys that have a chance to be Pro Bowl players."

The Panthers became the first team in the Super Bowl era to use all seven draft picks on defense last year, but don't expect a repeat of that this year. In fact, Rhule said this year's draft will likely be more focused on offensive players.

Rhule said with the NFL going to a 17-game season it's more important than ever to have depth on the defensive line and at cornerback that can rotate in and out of the lineup. That strategy certainly worked last season for the Tampa Bay Buccaneers, which were deep at both spots.

Fitterer wouldn't say if the Panthers have made decision on whether to pick up the fifth-year option on Darnold's contract for the 2023 season, but said the team “has a strong plan” it will begin to implement after the draft. Hypothetically, that could be determined by if the Panthers draft a QB at No. 8 overall.