Panthers have tough decision to make on Cam Newton's future 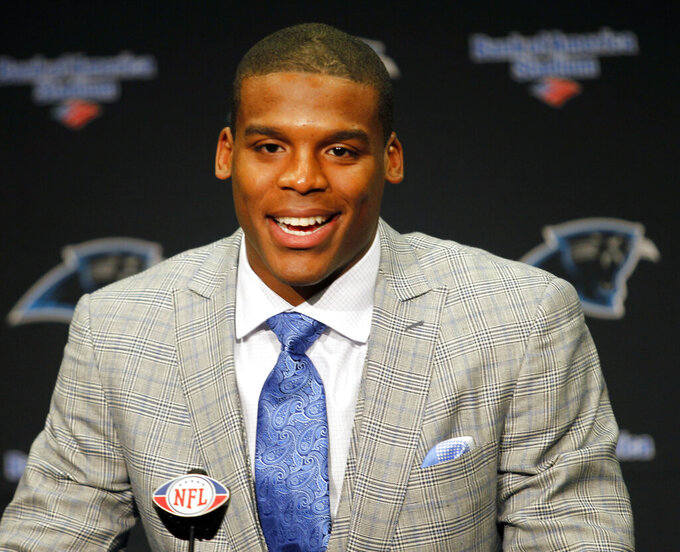 FILE - In this April 29, 2011, file photo, Carolina Panthers first-round draft pick Cam Newton answers a question after being introduced during an NFL football news conference at Bank of America Stadium in Charlotte, N.C. Cam Newton is a former league MVP and the long-time face of the Panthers franchise. But it's hard not to wonder if his future in Carolina is coming to an end following his recent spate of injuries. (AP Photo/Bob Leverone, File)

The 2015 league MVP has struggled with shoulder and foot issues the last two seasons and will finish the season on injured reserve. He is 0-8 in his last eight starts and the Panthers face a difficult decision in February.

The organization must decide whether to pay Newton $21.1 million next season or cut ties with the longtime face of the franchise and save $19 million under the 2020 salary cap. If they decide to let Newton go, the quarterback would only cost the Panthers $2 million next season in dead cap space.

Trading Newton would be another option, although the Panthers would have to find a team willing to take on his exiting contract or agree to give the QB an extension.

Panthers general manager Marty Hurney and coach Ron Rivera aren't ready to discuss that option, not with the Panthers (5-3) very much in the playoff hunt.

Newton, who hasn't done an interview about his health since aggravating his foot injury in a Week 2 loss to Tampa Bay, made a brief cameo in the locker room on Wednesday.

When pressed to talk, Newton looked back at reporters with a smile on his face and said, "Y'all got all of the answers anyway. Y'all going to figure it out."

Hurney also declined interview requests, instead referring to the statement he released Tuesday. That statement said "at this time, we have decided that the best decision to reach the goal of bringing the foot back to 100% is to place Cam on injured reserve."

Rivera said it was a "collective decision" between all parties to put Newton on injured reserve but refused to discuss the QB's situation after making an opening statement.

"We feel right now the best thing was to put him on injured reserve and move forward," Rivera said. "I really do appreciate everything Cam does and the fact he is still here and wants to be around and be part of it. He's done a great job doing it. With that, I would like to start talking about playing the Packers" on Sunday."

The coach was then asked whether he hopes Newton could return for the postseason after serving eight weeks on injured reserve. Rivera offered a terse response.

"That question will not be addressed until it is time to address it," Rivera said. "So, at the end of the day, he's on IR. Kyle Allen is our quarterback."

Rivera did say he expects that the decision will give Allen more clarity as far as his status as the team's unquestioned starting QB.

Allen is 5-1 as the team's starting quarterback in place of Newton, but there was some speculation he might lose his job after a 51-13 loss to the 49ers two weeks ago.

"I do think as a player it will help him," Rivera said. "It's one of those things where you don't have to worry, 'Hey, if I don't play well back-to-back something is going to happen immediately.'"

But Allen said his approach won't change now that Newton is on injured reserve.

"To be honest, I always expected to be in this position," said Allen, who went undrafted in 2018. "... I expected that some way I was going to find a way to get here."

Rivera wouldn't rule out the Panthers adding a third quarterback to the roster at some point.

Allen and rookie Will Grier are the only QBs currently on the roster.

For Allen, the rest of the season is an opportunity to bolster his resume and perhaps establish himself as Carolina's next franchise quarterback.

"I knew when I got my opportunity to play in this league I would have to take advantage of it," Allen said. "Now I just have a few more opportunities."