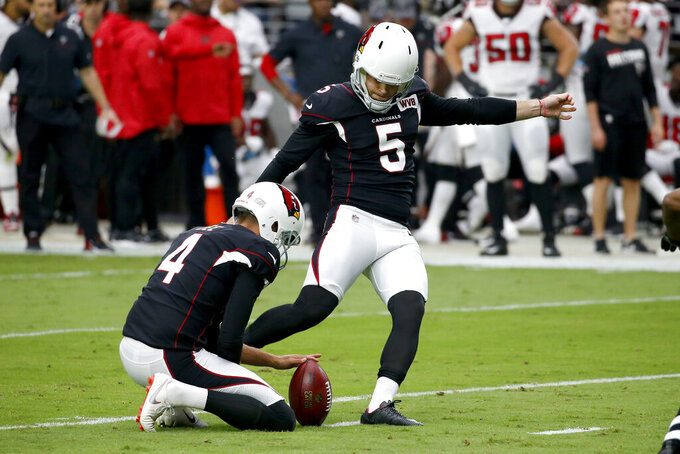 FILE - In this Sunday, Oct. 13, 2019 file photo, Arizona Cardinals kicker Zane Gonzalez (5) kicks a field goal as punter Andy Lee (4) holds against the Atlanta Falcons during the first half of an NFL football game in Glendale, Ariz. Zane Gonzalez has taken over as the Carolina Panthers kicker after the team released Ryan Santoso, Wednesday, Sept. 15, 2021. (AP Photo/Ross D. Franklin)

CHARLOTTE, N.C. (AP) — Zane Gonzalez thought there was a possibility he might wind up with the Carolina Panthers following a strong tryout with the team this past June in which he was “pretty much perfect” on his field-goal and extra-point attempts.

It took three months, but it turns out he was right.

“I was wishing it was a little sooner, but I eventually made it here. So I’m just happy to be here,” Gonzalez said Wednesday.

Gonzalez will assume kicking duties this week when the Panthers host the New Orleans Saints in an early NFC South showdown. Carolina signed him after abruptly parting ways with rookie Ryan Santoso — a move that saved the Panthers a future seventh-round draft pick.

The Panthers' kicking position has been unsettled since Joey Slye fell into a slump during the preseason.

The team initially signed German kicker Dominik Eberle to compete with Slye but cut him after one practice.

Carolina then acquired Santoso in a trade with the New York Giants, and he promptly beat out Slye for the job with a strong showing in the team's preseason finale against the Pittsburgh Steelers. Santoso nailed three field goals, including a 52-yarder off the right goalpost, and two extra points. Slye missed his third kick of the preseason that night and was cut the next day.

As part of the trade, the Panthers would have had to give the Giants a 2022 seventh-round draft pick if Santoso was on the roster for two weeks.

He didn't make it that far.

Santoso missed an extra point in the Panthers' season-opening 19-14 win over the New York Jets and was cut.

Even before that miss, coach Matt Rhule's confidence in Santoso appeared to have waned.

In the first quarter of the Jets game, Rhule passed up a 51-yard field goal attempt on a calm, sunny afternoon in favor of punting from the Jets 33, a move that drew boos from the home crowd.

“I don’t want to beat up on people when they’re not here,” Rhule said of the decision to cut ties with Santoso. “It felt like it was the right thing (to cut him). Across the board, practice, game, just feeling like we didn’t want to think about it. Zane has kicked in the National Football League and was 88% over the course of a season.”

That was back in 2019 when Gonzalez made 31 of 35 field-goal attempts with the Arizona Cardinals.

But last year Gonzalez struggled, converting 16 of 22 field goals. That ultimately cost him his job as the Cardinals signed veteran Matt Prater to replace him. Gonzalez landed on the Detroit Lions' practice squad before signing with Carolina on Tuesday night.

Rhule downplayed the significance of not wanting to surrender a draft pick as part of the decision to cut Santoso.

“We just thought it was time to move on,” Rhule said.

The irony of Carolina's struggles to settle the kicking situation is that Slye appears to have rectified the yips that plagued him during training camp and the preseason. After being cut by Carolina, he signed with the Houston Texans and made all three field goals and all four extra points in a Week 1 win over the Jacksonville Jaguars.

Slye is a more accurate career kicker over the course of his career than Gonzalez, making 80% of his field goals compared to Gonzalez's 78%.

While the Panthers are hoping Gonzalez can bring some stability to the position, there are no guarantees he won't suffer the same fate as Slye or Santoso. Since the Panthers signed him off the Lions' practice squad, he is guaranteed a spot on the 53-man roster for the next three weeks.

“Any time you can get any security in this league, it's amazing,” Gonzalez said with a smile.

For now, Gonzalez said he isn't allowing Carolina's growing impatience with kickers to worry him.

“No pressure on me," Gonzalez said. "I’m just trying to embrace and enjoy the opportunity.”

NOTES: Right guard John Miller was activated from the COVID-19 reserve list and joined the team at practice on Wednesday. He is expected to start this week against the Saints. .... Guard Matt Elflein (hip) and defensive tackle DaQuan Jones (groin) were limited in practice Wednesday.