Panthers kicker blames his misses for costly loss to Saints 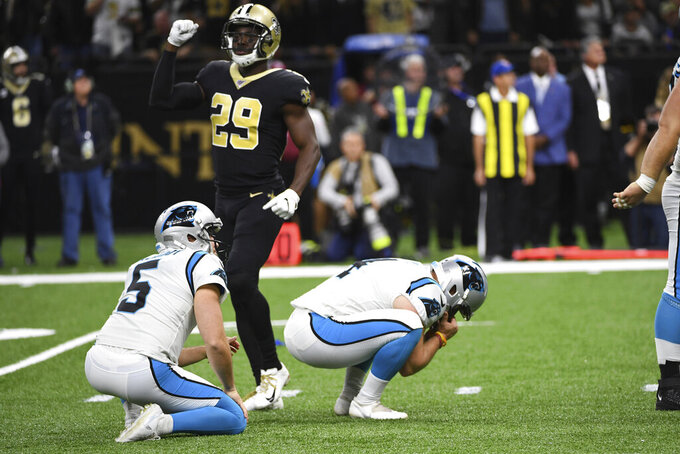 NEW ORLEANS (AP) — After hugging Saints counterpart Wil Lutz, Carolina rookie kicker Joey Slye trudged toward the locker room, holding his helmet in one hand while staring at the turf.

Slye felt his failures cost the Panthers a game they desperately wanted to win.

Slye was wide right on a 28-yard, would-be tiebreaking field goal with 1:56 left, depriving Carolina of its first lead and completing a rough day in which he also botched two extra points.

He then watched Lutz’s 33-yard game-winner as time ran out, handing the Panthers (5-6) a crushing 34-31 defeat that dropped them four games behind the Saints in the NFC South and three games behind Minnesota for the final wild card.

It is not hard to do the math. Slye’s errant extra points cost the Panthers two points, and they also failed on a 2-point conversion trying to make up for his first miss. His missed field goal took away three more.

Slye said he was not distracted by Saints defender Marcus Davenport, who leaped over the line in an attempt to block the kick.

The officials threw a flag on the same play but picked it up, ruling snapper J.J. Jansen had not been held by the Saints’ David Onyemata, as the official who tossed the flag initially suspected.

“I felt like I was pulled down by the back of my helmet,” Jansen said. “They said I was pushed down (which is legal). It’s a judgment call by the officials.”

Had Slye converted the field goal, the Panthers would have gone ahead 34-31 after they trailed 14-0 early and 31-18 in the second half.

Christian McCaffrey cut the deficit to 31-24 on a 4-yard touchdown run with 1:28 left in the third quarter before Slye’s second missed extra point. Kyle Allen’s 2-yard, fourth-down scoring pass to D.J. Moore helped them tie the score at 31 with 9:23 left.

When safety Eric Reid stuffed Alvin Kamara for a fourth-down loss on the next possession, Carolina drove 33 yards to the Saints 10, setting up Slye for a chip shot from the middle of the field.

“If you push it right, it means your plant foot is a little deep,” he said. “Every single kick has to be on point.”

Tight end Greg Olsen pointed to Carolina’s inability to score a touchdown on that last series. The Panthers had a first-and-goal at the 3 after a replay review led officials to call pass interference on the Saints, but they lost 7 yards in three plays.

“That was tough,” Olsen said. “We made too many critical mistakes to win on the road. Having a chance to overcome them was a miracle in itself.”

Defensive tackle Gerald McCoy lamented the Saints’ two first-quarter touchdowns that put the Panthers in a hole and the final possession when Drew Brees moved the Saints 65 yards with one timeout, setting up Lutz’s winning kick.

“We know we’re better than what we’re showing,” McCoy said. “It’s time to stop talking. It’s time to start doing. We actually should have won this game, but we put ourselves in too many bad spots.”

They appeared to be in a great spot before Slye’s last kick.

Slye, who was not drafted, won his job by making seven of eight field goals in the preseason, including three from 50 yards or longer. The Panthers placed longtime kicker Graham Gano on injured reserve at the end of August with a lingering knee injury that sidelined him for the last four games of 2018.

Slye was named NFC special teams player of the week in Week 4 after making all three of his field goals, including a 55-yarder, against Houston.

He hit field goals of 41 and 52 yards against the Saints, but the rest of the day was a nightmare.

Still, it didn’t sound like the Panthers had lost faith in him.

“He is a young kicker,” Panthers coach Ron Rivera said. “He is going to make his mistakes, but if you give him time and stick with him, eventually he will become a good kicker."