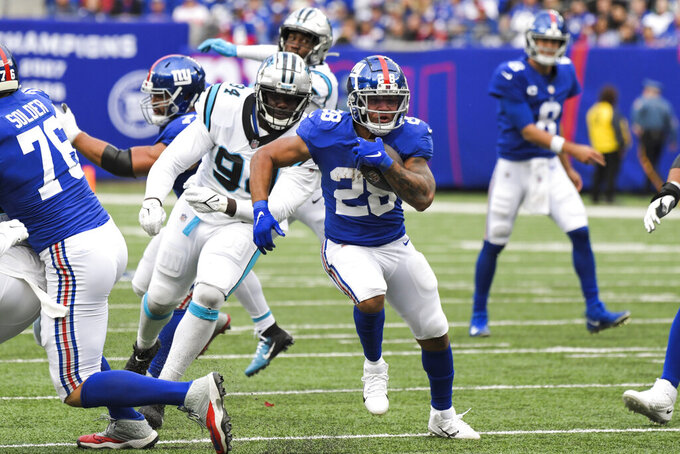 EAST RUTHERFORD, N.J. (AP) — For the first time this season, Sam Darnold may have to start looking over his shoulder.

In fact, there may be a lot of guys on the Panthers who may be facing reduced playing time after Carolina dropped a 25-3 decision to the woeful New York Giants on Sunday.

Darnold is the obvious player under the microscope after the Panthers (3-4) did little on offense in dropping their fourth straight game with Christian McCaffrey sidelined. He was yanked in favor of second-year quarterback PJ Walker early in the fourth quarter after completing 16 of 25 passes for 111 yards and one interception.

Panthers coach Matt Rhule said Darnold, who came to Carolina in an offseason trade with the Jets, will be the starter next week at Atlanta (3-3), and for the time being.

“His sense of urgency this week, I expect to be heightened,” Rhule said of Darnold. “I try to put that sense of urgency on our coaches. Obviously, it didn’t show up. We have to coach better but our players have to play better as well. And that starts with the quarterback.”

After getting a field goal on the opening drive, the Panthers did very little. Their three points and 173 total yards were lows since Rhule took over for the 2020 season.

Rhule said the performance clearly was not what the team expected. He had said earlier in the week his team would stress the running game. It finished with 56 yards on 17 carries.

“I think quarterbacks go through ups and downs and highs and lows,” Rhule said. “Look at Daniel Jones. He went through the same kind of game probably last week. He came out and played great. Sam’s got to take care of the football and Sam’s got to throw on time and if it's not there, find the checkdowns.”

Despite not having most of his playmakers, Jones threw a touchdown pass, made a spectacular catch on a trick play and threw for 203 yards against a good defense. He did not turn the ball over.

Darnold said being lifted was not a surprise with the offense failing to get into a rhythm. He added he knew Rhule was just trying to spark the team with Walker.

Playing at MetLife Stadium for the first time since being traded by the Jets, Darnold said all he can do is get back to work. He was not embarrassed about being lifted.

“I’m going to go out there, I’m going to play football and give it all I’ve got for my teammates,” said Darnold, who also gave the Giants two points after being flagged for intentional grounding in the end zone in the second quarter.

The Panthers' defense played well, limiting New York to 302 yards. New York scored five points in the first half with two coming off the intentional grounding and the other three coming on the first of Graham Gano's three field goals. That came on the series after the safety.

“I don’t know if we realize the position we’re in,” Rhule said. “You could tell New York certainly knew after last week the position they were in. Their backs were against the wall. They had a sense of urgency that we did not have. We’ll find that this week. We have to find it this week. We were not the tougher team today.”