Panthers' McCaffrey set for return to action vs. Broncos 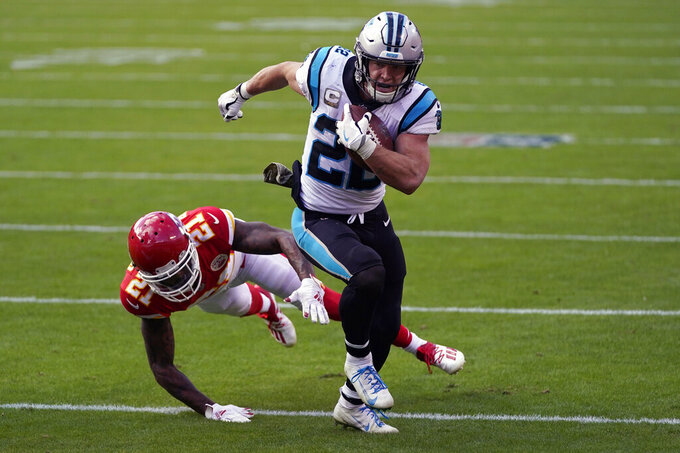 FILE - Carolina Panthers running back Christian McCaffrey (22) runs past Kansas City Chiefs cornerback Bashaud Breeland (21) during the second half of an NFL football game in Kansas City, Mo., in this Sunday, Nov. 8, 2020, file photo. It has been a long, frustrating season for 2019 All-Pro running back Christian McCaffrey. But the Panthers star is ready to return for the final four games of the season after missing nine games this season with ankle and shoulder injuries (AP Photo/Jeff Roberson, File)

CHARLOTTE, N.C. (AP) — Christian McCaffrey is champing at the bit to get back on the field Sunday against the Denver Broncos after what has been a frustrating season marred by injuries.

The Panthers' running back has been sidelined for nine games this season with ankle and shoulder injuries, but is hoping to finish out the season on a positive note with a strong December. His injury problems arose after he became only the third player in NFL history to post 1,000 yards rushing and receiving in the same season in 2019.

“I feel great," McCaffrey said of his playing status this week. "I feel really great.”

McCaffrey, who grew up watching his father Ed McCaffrey win Super Bowls, said he's always loved football but that having to watch from the sideline has made him want it even more.

“It's what makes me happy, but they say you don't know what you have until it's gone,” McCaffrey said. “When something gets taken from you that you love to do so much it can be challenging. It's frustrating mentally, emotionally and physically. For me to go through that, in a way it continues to spark a fire in me, understanding just how much I love this game.”

McCaffrey had a high ankle sprain in Week 2 and missed the next six games, He returned to play against Kansas City on Nov. 8 and ran for 69 yards and a touchdown on 18 carries and caught 10 passes for 82 yards and another score before injuring his shoulder on the final drive of the game. He's missed the past three games.

Panthers coach Matt Rhule said McCaffrey was scheduled to practice on Monday, but the team was forced to close its facility after multiple players either tested positive for COVID-19 or were exposed to it during the bye week.

The Panthers (4-8) have been all but eliminated from playoff contention, but Rhule said resting McCaffrey for the remainder of the season and saving wear and tear on his body is something that never crossed his mind.

He thinks it would send the wrong message to his team.

“I think the modern society doesn't always see it this way, but we get paid and we have the privilege of doing a job, and it's to play football,” Rhule said.

“If I coach any differently this week because we might not go to the playoffs, what kind of coach does that make me? I think that is the same for all of us. If someone is healthy and they are able to go, then I think that they would go."

In the three games he's played this season, McCaffrey has put up big numbers, totaling 374 yards and six touchdowns. The Panthers have been dynamic in the red zone when he's on the field, scoring touchdowns on 88.9% of their chances.

Mike Davis has been starting in McCaffrey's place.

Davis started out strong, averaging 117 yards per game from scrimmage with three touchdowns in his first three games — all of those Carolina wins. But in the six games without McCaffrey since, Davis has averaged just 61.6 yards per game with two touchdowns.

McCaffrey said it has been tough watching the Panthers lose close games this season. Six of their eight losses have been by a combined 25 points.

“That's the thing that when we figure it all out it's going to be fun — how to finish those games,” McCaffrey said. “... From the outside looking in, I think we have an unbelievably tough team and a team that is never going to give up. It's just a matter of figuring out how to win and how to be a true winner. I think that is the next step."

He said knowing that he could help if he was healthy is frustrating.

“I always think I can help, that is just the mindset I have,” McCaffrey said. “And that is part of the frustration is that you do think you can help. But once again you ability is your availability. ... I want to be on the field."