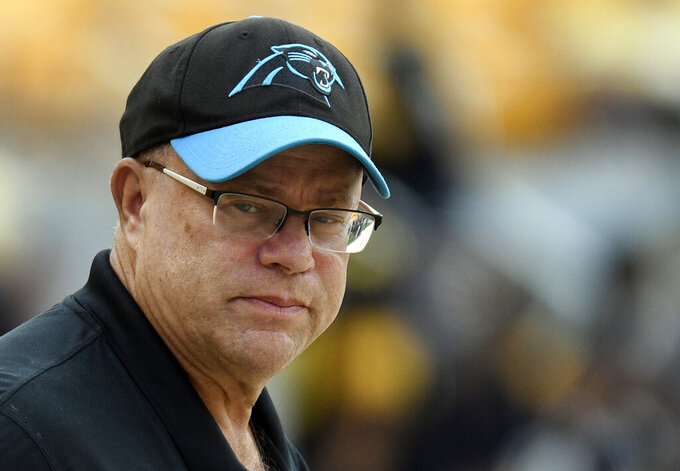 FILE - In this Aug. 30, 2018, file photo, Carolina Panthers owner David Tepper walks in the field during before an NFL football game against the Pittsburgh Steelers in Pittsburgh. Panthers owner David Tepper says it’s important for team to have a solid contingency plan in place at quarterback next season given the uncertainty surrounding franchise QB Cam Newton’s bothersome right shoulder. (AP Photo/Don Wright, File)

CHARLOTTE, N.C. (AP) — The Panthers are preparing for life without Cam Newton next season in case the team's franchise quarterback can't make it back from a lingering shoulder injury.

Panthers owner David Tepper said Tuesday that while the team is exhausting all options to make sure Newton's throwing shoulder gets the medical attention he needs this offseason, it is important to "keep their options open."

The hope, he said, is Newton will be healthy. However, it's been 2½ weeks since Carolina's season ended, and the team still doesn't know if the 2015 league MVP will need surgery.

The Panthers have never said what the injury is — and Newton doesn't know either.

"If you know what you might be facing next year, or not facing — hopefully Cam's shoulder is fantastic and we're hunky dory and we're all happy — (but) if it's not, you may need more cap space," Tepper said. "You need to be able to go out and find somebody. If you don't, (reporters) are going to be writing up what a dope we are here. Why didn't we make these other moves?"

Newton struggled most of the season throwing the ball more than 15 yards downfield because of a lingering shoulder issue, partially stemming from surgery to repair a partially torn rotator cuff in 2017. The Panthers eventually shut him down with two games remaining after being eliminated from playoff contention.

The 6-foot-5, 245-pound Newton was a mere shell of himself in the passing game the second half of last season as the Panthers finished 7-9 after starting the season 6-2.

"Of course it's a concern," Tepper said of Newton's shoulder. "... Cam Newton is the guy we are going to be depending on. He's a talent. But it would be foolish for anybody to say that you're not having an awareness of what could be and potential things that could happen through the year."

Tepper also pointed to Colts QB Andrew Luck as a player who returned from a shoulder injury to play at a high level this year — although that came after Luck sat out all of the 2017 season.

"From our people on the inside and his people on the outside there are a lot of people looking to see what is the best course of action," Tepper said.

Tepper said undrafted rookie Kyle Allen, who played well in Carolina's season-ending win at New Orleans — a game in which the Saints rested many of their starters after having clinched home-field advantage in the NFC — is an option.

However, Tepper also said looking outside the organization is a possibility.

He said in retrospect the Panthers should've considered sitting down Newton earlier in the season when he wasn't able to practice during the week.

"As Cam's shoulder got worse that made it that much harder to win," Tepper said.

Tepper also said during the 34-minute interview with reporters:

— General manager Marty Hurney and coach Ron Rivera are still the right people to lead the franchise, which is why he retained their services following a 7-9 season. He said "it seemed to me we had some pretty good personnel."

— The Panthers "got older faster than we thought we were" on defense and he should have made some coaching moves earlier in the season when it was apparent the team was struggling. He had input on Rivera taking over defensive play-calling duties in Week 13 from defensive coordinator Eric Washington, a role Rivera will maintain next season. Tepper likes that Rivera "has his reigns" on the defense again.

— He and his management team, led by president Tom Glick, are actively exploring options to bring a Major League Soccer expansion team to Charlotte.

— He is "still investigating" the long-term option of building a new football stadium. Bank of America Stadium opened in 1996 and is one of the older stadiums in the league.

— He plans to build a practice bubble on the team's current practice fields before next season, while exploring other more permanent practice facility options possibly south of the border in South Carolina. "When you have to practice in a ballroom (because of rain), that's just crazy to me," said Tepper.

— He plans to expand the team's ring of honor. He didn't mention anyone by name, but a couple of logical options are Steve Smith and Julius Peppers, if he decided to retire.

— The Panthers will have training camp at Wofford College in Spartanburg, South Carolina, for one more season, but wouldn't rule out anything beyond 2019.

— He wouldn't comment on safety Eric Reid's claim that he is being targeted by the league through excessive drug testing because of the ongoing collusion case against the NFL in which he alleged team owners conspired to keep him out of the league because of his decision to kneel alongside former 49ers teammate Colin Kaepernick during the national anthem to protest racial and social injustice.