Panthers to stick with struggling Mayfield at QB vs 49ers 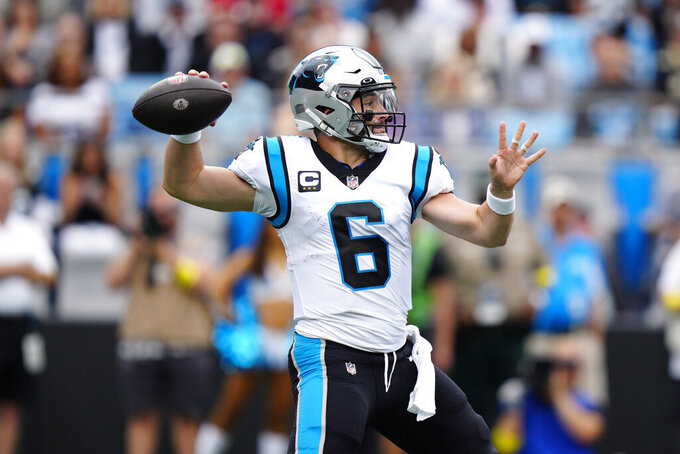 Carolina Panthers quarterback Baker Mayfield (6) sets back to pass during the first half of an NFL football game against the New Orleans Saints, Sunday, Sept. 25, 2022, in Charlotte, N.C. (AP Photo/Jacob Kupferman)

CHARLOTTE, N.C. (AP) — Baker Mayfield will remain the Carolina Panthers' starting quarterback for next Sunday’s game against the San Francisco 49ers despite yet another poor performance that ended with him getting booed by the home crowd at Bank of America Stadium, third-year coach Matt Rhule said Monday.

With Sam Darnold eligible to return from injured reserve, there’s been plenty of speculation that Rhule might consider a change at quarterback after Mayfield turned the ball over three times and had five more passes batted at the line of scrimmage in a 26-16 loss to the Arizona Cardinals on Sunday.

However, Rhule said Darnold is not ready to return from a high ankle sprain and wouldn’t be available until next week at the earliest. P.J. Walker is Mayfield's backup.

“I think Baker’s our quarterback,” Rhule said Monday. “We have to continue to find ways to help him.”

Carolina's passing game is a mess through four games, and Mayfield is ranked last in the league in ESPN’s total quarterback rating with a paltry mark of 15.4, well behind 31st-ranked Justin Fields of the Chicago Bears (25.9).

Kansas City's Patrick Mahomes leads the league with a rating of 82.4.

Rhule speaks weekly to Panthers owner David Tepper, but said they haven't discussed his future. Rhule is 11-26 with Carolina.

The coach said he is confident he and his staff can turn things around.

“If I make it about me, I’m not really the coach that I want to be, or who I say I am," Rhule said. "As a head coach I will always stand up first and put it on my shoulders. At the end of the day we are going to keep trying to get better.”

The kicking game. Eddy Pineiro has been one of the few bright spots for the Panthers. He's been an admirable last-minute replacement for the injured Zane Gonzalez, converting all eight field goal attempts this season.

Tipped passes. Mayfield has had an NFL-high 11 passes tipped at the line of scrimmage, and no quarterback has had more passes tipped since he came into the league as the No. 1 overall pick in 2018. Some of that is a reflection of Mayfield's height — he was measured at just under 6-foot-1 at the scouting combine — but Rhule said coaches also need to put him in better position to make plays.

Frankie Luvu. The edge rusher is having a breakout season. Luvu picked off a pass by Kyler Murray and returned it 33 yards for a touchdown to give the Panthers a 7-0 lead on Sunday. That came one week after Luvu stripped the ball from New Orleans Saints running back Alvin Kamara, allowing Marquis Haynes to pick it up and rumble 44 yards for a touchdown. Luvu also had a team-high 11 tackles.

WR Laviska Shenault. After catching two passes for 90 yards, including a 67-yard TD in a win against the New Orleans Saints, the third year-wide receiver suffered a hamstring injury early in Sunday's game. Rhule said the Panthers had plays designed for Shenault that they couldn't use against the Cardinals and had to alter the game plan.

The Panthers are waiting to hear about the severity of star safety Jeremy Chinn's hamstring injury. Chinn left Sunday's game in the first quarter and later stood on the sideline with his leg heavily taped. Sean Chandler replaced him. The team expects to know more about Chinn's status on Wednesday.

25.5% — The Panthers' third-down conversion rate this season. Carolina was 2 of 10 on third downs against the Cardinals. The Panthers are averaging a league-worst 53.5 offensive plays per game. “The defense is playing a lot — they're playing too much,” Rhule said.

The Panthers turn their attention to the 49ers, and much of the focus this will week be on whether the team should have made a move for San Francisco's Jimmy Garoppolo instead of Mayfield this offseason.