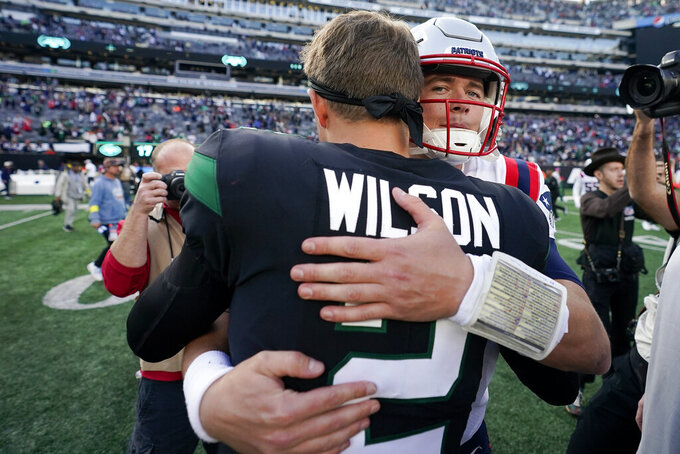 TURNOVER DIFFERENTIAL: Jets plus-1; Patriots even

JETS PLAYER TO WATCH: QB Zach Wilson. The second-year quarterback had his worst outing of the season in the first matchup with the Patriots, throwing three interceptions in the loss. He rebounded nicely with an efficient, INT-free game two weeks ago in the win over Buffalo. But all eyes will be on how Wilson fares this time around against Bill Belichick’s defense.

PATRIOTS PLAYER TO WATCH: LB Matt Judon. He is leading the NFL with 11 1/2 sacks, one shy of matching his career high set last season. He has three games with at least two sacks this season and is coming off a three-sack performance against Indianapolis.

KEY MATCHUP: Jets defensive line vs. Patriots offensive line. The Jets come in allowing just 201 passing yards per game. A big reason is the pressure they are getting on opposing quarterbacks. New York has 26 sacks on the season, ranking 12th in the NFL. The Jets sacked Patriots QB Mac Jones six times in the first meeting and will need to be disruptive again to give their offense a chance.

KEY INJURIES: Jets WR Corey Davis (knee) and DT Sheldon Rankins (elbow) were ruled out for the game. ... TE Kenny Yeboah (calf) sat out practice Friday and was listed as doubtful. ... Patriots DL Christian Barmore (knee) was placed on injured reserve after being limited the first two days of practice and not practicing Friday. ... P Jake Bailey also didn't practice Friday and was listed as doubtful. ... WR DeVante Parker (knee) was limited all week and questionable for the game. ... DL DeMarcus Mitchell and CB Jonathan Jones missed a practice early in the week, but fully participated Friday and were removed from the injury report.

SERIES NOTES: The Patriots have won 13 consecutive meetings, with the Jets’ most recent victory coming in Week 16 of the 2015 season, when New York won 26-20 in overtime at home. ... If the Patriots win their 14th straight this week, they will have the longest current winning streak in the NFL. ... The Jets’ past two wins over the Patriots have come at home — and both in overtime — including the game in 2015 and a 30-27 win in 2013. ... Belichick has a 35-10 record against the Jets. ... The teams have squared off in the playoffs three times, with the Patriots winning two of the meetings — both wild-card games. The Jets’ lone postseason win over their AFC East rivals came in a 2010 divisional-round game.

STATS AND STUFF: The Jets and Patriots are both coming off bye weeks. ... New York enters the game in second place in the AFC East behind Miami (7-3), but would move into first with a victory over New England. ... According to Sportradar, a win would put the Jets in first place in the division for the first time this late in the season — 10 or more games —since 2010, when New York and New England were tied at 9-2 through Week 12 of that season. The previous time the Jets were in first place in the AFC East at any point was through Week 1 of the 2018 season in a three-way tie with the Dolphins and Patriots at 1-0. ... New York is 4-0 on the road, joining Philadelphia (4-0) as the only teams without a loss away from home this season. ... Wilson is 5-1 as the Jets starter after missing the first three games with a knee injury, his only loss coming to New England. ... All five of Wilson’s INTs have come in two games: against New England (three) and at Pittsburgh (two) in his season debut in Week 4. ... Rookie WR Garrett Wilson has quickly become a go-to guy in the Jets’ offense. He leads the team with 42 catches, with 18 of them coming in the past three games. ... DL Quinnen Williams leads the Jets with seven sacks, tying a career high. He ranks fourth in the NFL with 17 quarterback hits. ... CB Sauce Gardner leads the NFL with 13 passes defensed and is the only rookie since 2000 to have at least one in his first seven games. He and D.J. Reed are the only cornerback duo in the league with both players getting at least 40 tackles, a tackle for loss, an interception and seven passes defensed. ... Belichick has a 100-38 (.725) regular-season record against the AFC East as coach of the Patriots. ... New England’s 72 overall victories over the Jets are the second most over any single opponent, trailing only the 77 all-time wins over Buffalo. ... Jones has 3 TDs, an INT and 94 passer rating in three career starts against the Jets. He has 18 TDs (17 pass, 1 rushing) with 11 INTs in 12 career home starts. ... S Devin McCourty enters this week tied with Harrison Smith for the most interceptions among all active players with 33. McCourty, Smith, Marcus Peters and Patrick Peterson are the only active players with at least 30 interceptions. ... K Nick Folk needs five field goals to become the fifth New England player with 100. Folk has kicked five in a game twice in 2022 — vs. Detroit Oct. 9 and at the Jets Oct. 30. He has 19 field goals on the season. ... Marcus Jones is first in the NFL with a 24.3-yard kickoff return average and is third in the NFL with 340 kickoff return yards. He also ranks third in the NFL with a 13.4-yard punt return average. ... Parker is second in the NFL with a 21.4-yard average per reception.

FANTASY TIP: Patriots WR Jakobi Meyers had nine catches for 60 yards and TD in the Week 8 meeting. He is looking to get his fifth game In a row against the division with 50-plus receiving yards.