Patriots preparing for anything in rematch with KC's Mahomes 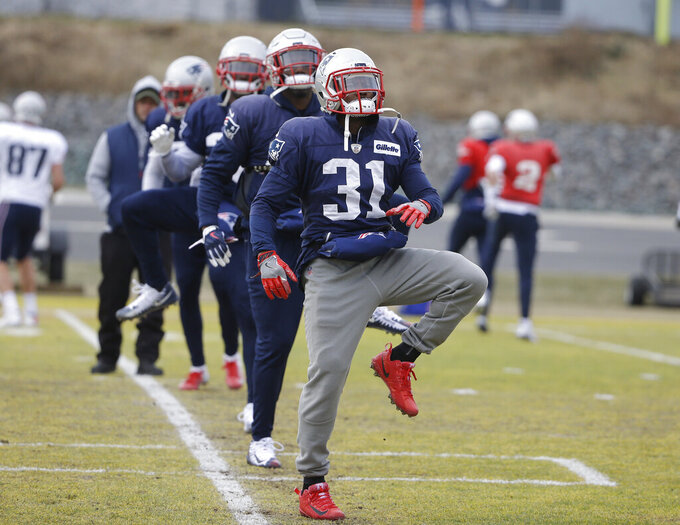 FOXBOROUGH, Mass. (AP) — In their first meeting with Kansas City, the Patriots had quarterback Patrick Mahomes figured out — at least for a half.

Creative and efficient in leading the Chiefs to a 5-0 start to the regular season, the second-year phenom looked very ordinary in the opening 30 minutes of their Oct. 14 matchup with New England, completing 14 of 23 passes for 164 yards, no touchdowns and throwing two interceptions. It added up to a 24-9 halftime deficit for the Chiefs.

Then the second half began.

Over the next two quarters the 23-year-old picked apart the Patriots' defense, throwing for four touchdowns, including a 67-yard TD strike to Kareem Hunt and a 75-yard TD pass to Tyreek Hill, tying the game at 40 with just over three minutes to play in the game.

It would take some late heroics by quarterback Tom Brady and a game-winning field goal in the closing seconds by Stephen Gostkowski for the Patriots to sidestep KC's comeback effort.

The Patriots have a lot more tape of Mahomes to study for the rematch in Sunday's AFC championship game. They're also hoping both history and the job they did disrupting Philip Rivers and the Chargers in the divisional round can be a starting point in slowing down Mahomes this time around.

Linebacker Dont'a Hightower said going back to what they did right in the first half against Mahomes could be the start of a plan of slowing him down in Round 2.

"We played the first half literally the exact way we wanted to," Hightower said. "We were able to mix things up, keep those guys guessing and keep them on their toes, not letting those guys make big plays.

"With an offense like that, you give (Kansas City coach) Andy Reid any kind of time and he's able to draw up a couple things, and that's something that we learned in the second half was that we've got to play a full 60 (minutes)."

Mahomes will be the sixth first-team All-Pro quarterback to face New England in the playoffs during the Belichick and Brady era.

The Patriots are 4-1 against the previous five. They have seven interceptions in those games, while allowing just six touchdowns. Two of those wins were against Peyton Manning in the AFC playoffs during the 2003 and 2004 seasons.

After coming up short during the regular season, Mahomes will again be looking to become the first opposing starting quarterback under the age of 25 to beat the Patriots under Belichick (25-0).

Mahomes went 2-4 against playoff teams this season, tossing 18 touchdowns and six interceptions in those games.

One of the things that has defined Mahomes in his first year as a full-time starter is his poise in the pocket. That, and his creativity under pressure using his running ability as well as sidearm and even no-look passes at times to keep getting the ball to his playmakers.

It's a big reason why the Chiefs' offense hasn't really missed a beat following the release of Kareem Hunt after video surfaced that showed the 2017 rushing champion knocking over and kicking a woman in a Cleveland hotel hallway in February.

"He's a first-year starter so he's gonna get better and better," safety Duron Harmon said. "I think he's played really good in the beginning of the season, middle of the season, end of the season. He's a guy that's definitely put himself in position to win the MVP. We know that. But we just gotta make it hard on him."

Defensive end Trey Flowers said being fundamentally sound, physical up front and trying to get the offense out of position should go a long way on Sunday.

"They're going to make some plays, but we've got to tackle well. And if you minimize the space with all these skills guys and fast guys, you can kind of get everybody to the ball and get some great pursuit."