Patriots without RB Michel vs Chiefs on Monday night 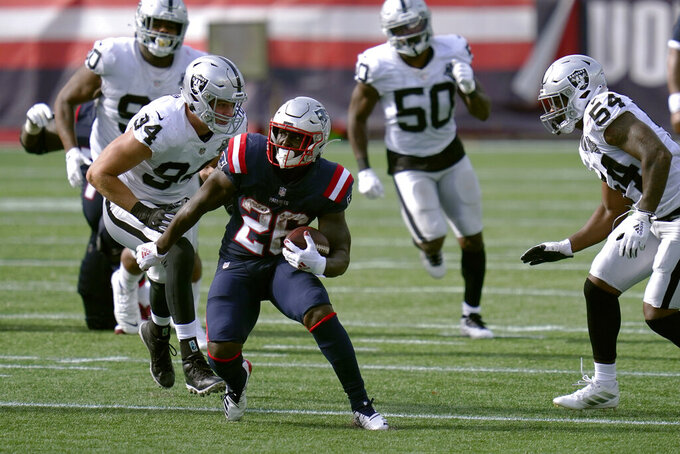 New England Patriots running back Sony Michel (26) runs against the Las Vegas Raiders in the second half of an NFL football game, Sunday, Sept. 27, 2020, in Foxborough, Mass. (AP Photo/Charles Krupa)

KANSAS CITY, Mo. (AP) — The New England Patriots, already without quarterback Cam Newton because of a positive COVID-19 test, also will be without running back Sony Michel because of a quad injury when they play the Kansas City Chiefs on Monday night.

Michel was limited last week in practice after rushing for 117 yards against the Raiders, a performance that included the two longest runs of his career. He was listed as questionable on the final injury report, then downgraded to out Monday, shortly after the Patriots and Chiefs learned nobody else had tested positive for COVID-19 and that their game was on.

The game was originally scheduled for Sunday, but it was delayed when the Patriots announced Saturday that a player had tested positive for COVID-19. That player turned out to be Newton, who has been isolating since learning the result.

Brian Hoyer is expected to start for the Patriots at Arrowhead Stadium. He has served as the No. 2 quarterback the first three games of the season ahead of Jarrett Stidham, who had been inactive. Stidham appeared to have the inside track to replace Tom Brady before Newton was signed, then he slid to third on the depth chart in training camp.

The loss of Michel is far less concerning than quarterback given the Patriots' depth at the position.

Rex Burkhead and James White, who is expected to play after missing two games due to the death of his father, are veterans with plenty of time in the offense. Undrafted free agent J.J. Taylor carried 11 times for 43 yards against the Raiders last week. Damien Harris is also eligible to come off injured reserve after surgery on his pinky finger.

“A couple years ago, we had good depth at running back and then we end up playing a receiver at running back and everything else, and so it just all diminished in a hurry,” Patriots coach Bill Belichick said this week. "We’ll just try to do the best that we can in terms of game planning and creating opportunities and personnel groups and plays or whatever it is to try to attack our opponents. But I think you’ve got to be careful about changing your whole offense just to work a couple guys into the lineup if that’s going to detract from something else. So, there’s a balance there.”

Harris, a third-round pick in the 2019 draft who played sparingly last season, had drawn rave reviews in training camp from running backs coach Ivan Fears and the rest of the Patriots staff.

"We’re all kind of anxious to see what he will do when it’s truly go time,” Fears said. “Everything he’s shown has been outstanding. He was having a great training camp. It was kind of unfortunate to get a little finger injury before the opening game. But yeah, we’re all kind of on pins and needles on this one. We’d like to see where he’s going to be.”