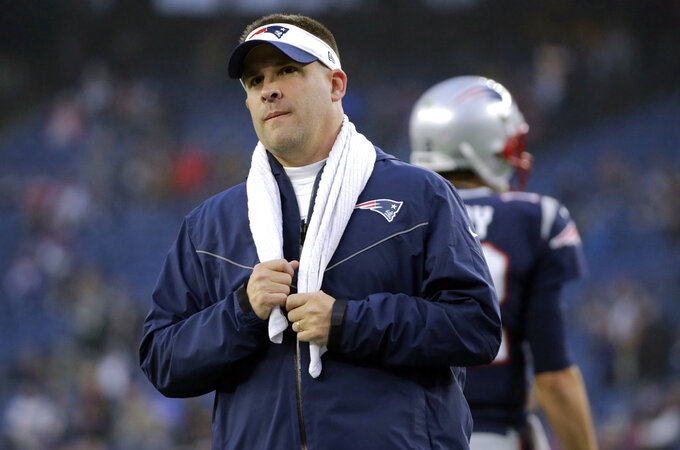 FILE - In this Dec. 2, 2018, file photo, New England Patriots offensive coordinator Josh McDaniels watches his team warm up before an NFL football game against the Minnesota Vikings, in Foxborough, Mass. McDaniels expects to be with the New England Patriots for at least another season. The Patriots offensive coordinator said Tuesday, Jan. 8, 2019, that “the book is closed” on him interviewing for other open head coaching jobs and that he is committed to New England moving forward.(AP Photo/Elise Amendola, File)

FOXBOROUGH, Mass. (AP) — Josh McDaniels expects to be with the New England Patriots for at least another season.

The Patriots offensive coordinator said Tuesday that "the book is closed" on him interviewing for other open head coaching jobs and that he is committed to New England moving forward.

McDaniels said during a conference call that he was grateful for the opportunity to interview with Green Bay over the weekend, but that he is "completely focused" on the Patriots and preparing for their divisional playoff matchup with the Chargers. On Monday, Matt LaFleur accepted an offer to become the Packers next coach.

"It's always a humbling experience to have an opportunity to interview with anybody for that position. I was thankful for the opportunity to meet with Green Bay," McDaniels said.

"It always gives you greater insight into an organization and how they do things. It's been very educational for me every time I've gone through it. And I've appreciated every single one of them.

"That was great, but no I'm completely focused on the Chargers and our season and finishing it strong and I'll be here moving forward."

McDaniels said he has not been in contact with the Cleveland Browns about their head coaching job.

Last offseason, McDaniels agreed to become the head coach in Indianapolis before changing his mind and returning to New England.

He said he wasn't sure if that decision factored into teams' willingness to approach him about coaching jobs this time around.

McDaniels is one of Patriots coach Bill Belichick's most-tenured assistants, having served under him for a combined 15 years — 10 as offensive coordinator — over two different stints, beginning in 2001. It's a run that allowed him to be a part of all five of New England's Super Bowl wins.

He left the Patriots in 2009 to coach the Denver Broncos. When that ended following the 2010 season, he spent the 2011 season as offensive coordinator for the St. Louis Rams before rejoining the Patriots in 2012.