Pats plan to focus on details after mistake-filled loss 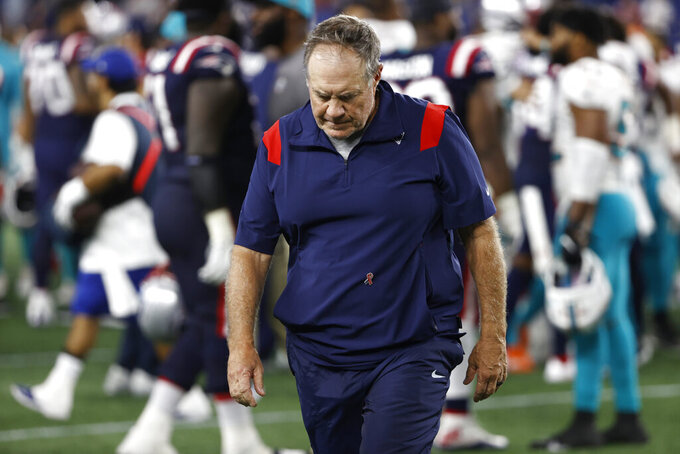 FOXBOROUGH, Mass. (AP) — The Patriots made some big plays in their season opener against the Dolphins. They were overshadowed by bigger mistakes.

New England had more first downs than Miami, converted a higher percentage of third downs, had more success running the ball, and finished with more total yards. It wasn’t enough to overcome a rash of penalties, poor red-zone performance and bad ball security in a 17-16 loss.

While there is no cause for panic this early, Sunday’s setback did provide some evidence that the Patriots’ rebuilt roster has some fine-tuning to do.

“We have excitement because we know how hard we will work ... and watch the tapes in a manner that will allow us to progress into next week,” receiver Nelson Agholor said. “A game like this isn’t something that will send us in the wrong direction, it is going to send us in a positive direction.”

Agholor was one several offseason free agents who made a solid debut in New England. He caught five passes for a team-high 72 yards, helping rookie quarterback Mac Jones settle into his first NFL start.

Jones had a fumble on the game’s opening drive, but was mostly steady as New England’s first rookie quarterback to start the season opener since Drew Bledsoe in 1993. Jones was efficient, completing 29 of 39 passes for 281 yards and a touchdown. But he said he left the field thinking more about the offense failing to convert touchdowns on three of its four red-zone opportunities.

“I think being the quarterback, I need to do a better job, demanding better in practice. Sometimes I just let things slide, myself included,” Jones said. “That’s not good enough. So I’m going to try and be more vocal, and I am a vocal person, but it’s kind of a new situation and I can be better. But it starts with me.”

New England’s defense allowed two touchdowns but ended the game looking more like the unit that was the league’s stingiest in 2019 than the one that finished ranked middle of the pack last season.

The Dolphins were held to 4 of 11 (36.4%) on third downs and only seven points in the second half. Jonathan Jones also had a fourth-quarter interception to give the offense a chance to win the game.

Sunday’s eight penalties were New England’s most since it also had eight during a 28-22 loss to Houston in Week 13 of the 2019 season, a span of 20 games.

The Patriots were the league’s least-penalized team in 2020 and only had more than five penalties in a game four times last season.

“In the end, it’s too many,” Belichick said. “I didn’t see a lot of penalties that were caused by mental errors out there. But whatever the cause is, we’ve got to try to commit fewer of them.”

After seemingly losing his job to undrafted rookie Quinn Nordin and beginning the week on the practice squad, Nick Folk was elevated to the 53-man roster prior to the game and resumed his 2020 role as Patriots kicker.

Folk probably will keep the role for Week 2 after connecting on his attempts from 27, 42 and 33 yards. It extended his streak of consecutive made field goals to 29, second in team history behind Stephen Gostkowski with 31 straight makes.

Running back Rhamondre Stevenson was one of the Patriots’ preseason standouts, showing elusiveness and breakaway speed while scoring a team-high five rushing TDs in three exhibition games.

He would probably like a do-over for his regular-season debut.

Stevenson had just one carry for 2 yards. He also had the Patriots’ second fumble of the day, following a 9-yard reception in the first quarter. He appeared in only three more plays after that, totaling five on the day.

The lost fumble is a bad sign for a player who had some ball security issues in college.

Right tackle Trent Brown appeared in seven plays before leaving in the first quarter with a right calf injury. If he’s out for an extended period it would be the latest in a string of medical issues that limited Brown to 16 of a possible 32 games the past two seasons with the Raiders.

3 — The Patriots’ rank in third-down efficiency through Sunday’s games. It’s a vast improvement from 2020 when they finished the season ranked 17th, converting on only 40.9% of their third-down opportunities.

It will be a matchup of rookie quarterbacks in Week 2 when the Patriots visit the Jets and No. 2 overall pick Zach Wilson. New York lost to Carolina in its opener.