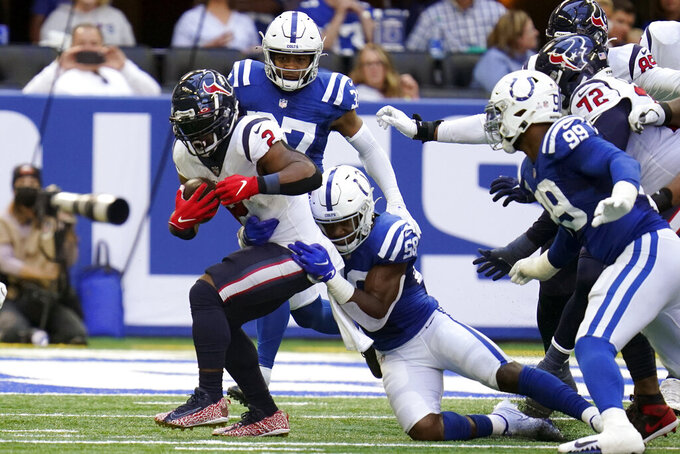 NEW ORLEANS (AP) — Running back Mark Ingram was traveling to New Orleans on Thursday, is slated to practice on Friday with the Saints and play on Sunday against the Tampa Bay Buccaneers, coach Sean Payton said.

The Saints coach confirmed on Thursday that New Orleans had agreed to a trade with the Houston Texans that brings Ingram back to New Orleans, where he spent the first eight seasons of his NFL career.

Payton did not specify what the Saints were giving up in the deal with Houston and neither team involved in the trade has announced those details.

Saints general manager Mickey Loomis "and I talked about it in Seattle and we felt it was worth calling and just kind of poking around," Payton said in reference to how trade talks started while the Saints were visiting the Seahawks for a Monday night game.

"Once that momentum began, I was still somewhat skeptical, just relative to the role he was playing for” Houston, Payton added.

Ingram started seven games for Houston this season, rushing 92 times for 294 yards and a touchdown. He also has seven catches for 24 yards.

“It went back and forth and fortunately we were able to work something out,” Payton said.

“There's a leadership element, a toughness element. There's a respect element," Payton continued in reference to why New Orleans sought to bring Ingram back. "We feel like he does a lot of things well. He knows this system and I think he'll be an important addition for us.”

The former Alabama Heisman Trophy winner was drafted 28th overall by New Orleans in 2011. He spent the previous two seasons with Baltimore.

Ingram, 31, twice rushed for more than 1,000 yards in a season in New Orleans. He rushed for a career-best 1,124 yards and 12 touchdowns in 2017, the first of two seasons he worked in tandem with Alvin Kamara in the Saints’ backfield.

Ingram’s production dropped sharply in 2018, his last season under contract with New Orleans. But he again eclipsed the 1,000-yard mark in a single season in 2019 with the Ravens.