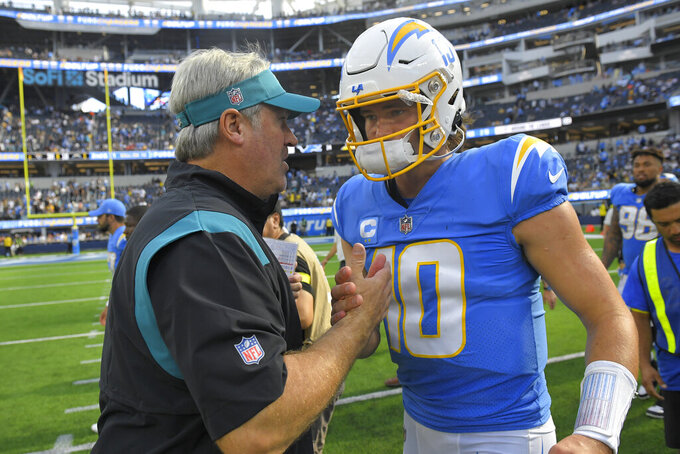 OPENING LINE: Eagles by 7, according to FanDuel SportsBook.

AGAINST THE SPREAD: Jacksonville 2-1; Philadelphia 2-1.

TURNOVER DIFFERENTIAL: Jaguars plus-7; Eagles plus-4.

EAGLES PLAYER TO WATCH: QB Jalen Hurts has entered the MVP conversation with three scintillating performances to help the Eagles reach 3-0 for the 10th time in club history. A dual threat as a passer and runner, Hurts ranks second in total offense (1,083 yards), third in passing yards (916), fifth in QB rating (106.5), second in rushing yards (167) by a QB and first in rushing TDs (three) by a QB. He has set up his receivers for big plays, including DeVonta Smith’s career-bests of eight receptions and 169 yards in last Sunday’s 24-8 win over Washington in which Smith made two sensational catches and another stellar grab for a TD. Smith’s 16.6 yards per catch are second in the NFL. Hurts’ top playmaker, WR A.J. Brown, is fourth in the NFL with 309 receiving yards, and TE Dallas Goedert has 11 catches for 168 yards and a TD.

JAGUARS PLAYER TO WATCH: QB Trevor Lawrence has looked every bit like the player the Jaguars expected when they selected him No. 1 overall out of Clemson prior to last season. Lawrence has especially shined in the past two games, passing for 487 yards and five TDs with no turnovers and no sacks in wins over the Colts and Chargers. For the season, Lawrence has completed 77 of 111 passes for 772 yards and six TDs, one INT, two sacks and a 103.1 rating. He was honored on Wednesday as the AFC Offensive Player of the Week after he tied his career high by passing for three TDs against the Chargers.

KEY MATCHUP: Jacksonville offensive line vs. Philadelphia defensive line. The Jaguars have provided outstanding protection for Lawrence and didn’t allow a sack in Sunday’s 38-10 win over the Chargers or the previous week’s 24-0 shutout of the Colts after giving up two in a season-opening 28-22 defeat at Washington. But the unit will be tested against a stout Philadelphia front that sacked Commanders QB Carson Wentz nine times last week and ranks second in the NFL with 12 sacks and leads the league with 27 QB hits. Jaguars rookie C Luke Fortner, a third-round pick out of Kentucky, likely will get his biggest test to date. ... Also keep an eye on Jacksonville’s run defense against Philadelphia’s rushing attack. The Jaguars have allowed just 55 yards on the ground per game, ranking first in the NFL, and haven’t given up a rushing TD. Philadelphia, meantime, leads the NFL with six rushing TDs while ranking seventh in rushing yards per game (150.3). A pair of rookies have helped the Jaguars’ defensive turnaround in 2022. No. 1 overall pick Travon Walker has eight tackles, a sack and an INT from his outside LB spot, and fellow first-round selection (No. 27 overall) Devin Lloyd leads the team with 24 tackles, along with six pass breakups and a pair of INTs, from his inside LB position. Overall, the Jaguars have 21 QB hits and seven sacks.

KEY INJURIES: Jaguars CB Shaquill Griffin (hip) missed Sunday’s win over the Chargers after getting hurt in the previous Friday’s practice, but returned to practice this week. Pederson sounded optimistic about his chances of playing against Philadelphia. The Jaguars coach wasn’t as hopeful about the chances of backup lineman Cole Van Lanen (hamstring) taking the field. He sat out of practice on Wednesday. ... Eagles starting LG Landon Dickerson is nursing a foot injury. He played through it against the Commanders, but was sidelined during Wednesday’s practice. Smith (back) and All-Pro CB Darius Slay (back) were two other notables out on Wednesday, though both are expected to play against Jacksonville.

STATS AND STUFF: Pederson was 42-37-1 as head coach of the Eagles, but was fired after going 4-11-1 in 2020. ... Jaguars offensive coordinator Press Taylor was on Philadelphia’s coaching staff from 2013-20, and defensive coordinator Mike Caldwell began his coaching career in 2007 with the Eagles after a four-year stint with the club at linebacker. ... Philadelphia also started 3-0 in 2016 under Pederson. ... The Eagles have scored 72 of their 86 points in the first half so far. ... Veteran Philadelphia defensive linemen Brandon Graham and Fletcher Cox are tied for the team lead with three sacks. Graham (62) and Cox (61) are fourth and fifth, respectively, in club history in sacks. Graham was tabbed as NFC Defensive Player of the Week on Wednesday after his performance against Washington, getting 6 tackles, 2½ sacks, a pass defended and a forced fumble. ... Jacksonville has lost 17 straight games to NFC teams. ... The Jaguars haven’t had three consecutive victories since 2017 when they went to the AFC title game. ... Jacksonville has six interceptions after getting seven in all of 2021 and eight takeaways after getting nine in all of 2021. ... Pederson elected to stay in Jacksonville for practice this week in spite of Hurricane Ian touching down in Florida. He said it was important for the players to be with their families. ... A statue of Pederson and former Eagles QB Nick Foles in honor of their play call of the “Philly Special” during the Eagles’ 41-33 Super Bowl 52 victory over New England stands outside of Philadelphia’s Lincoln Financial Field. Pederson said the statue is an honor, though he doesn’t have plans to see it in person until he retires.

FANTASY TIP: Fantasy owners who have Eagles WR Quez Watkins on their bench, or can pick him up on the waiver wire, might be wise to put him in the lineup this week. The speedy Watkins has been targeted just three times this season, making two catches for 69 yards and a TD. But the Jaguars likely will put a ton of attention on Brown, Smith and Goedert, leaving Watkins in one-on-one matchups. And Hurts, like he did in Week 2 for Smith after he went without a catch in the season opener, might want to get the Eagles’ third option on the outside some opportunities to get more involved.