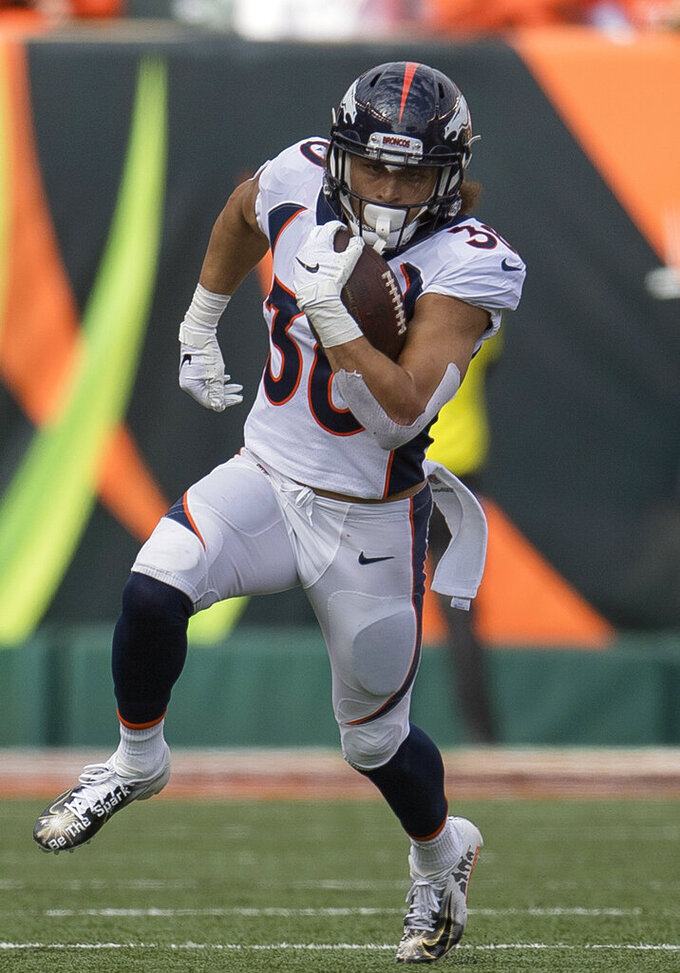 FILE - In this Dec. 2, 2018, file photo, Denver Broncos running back Phillip Lindsay (30) runs with the ball during the first half of the NFL football game against the Cincinnati Bengals, in Cincinnati. He didn't get invited to the NFL combine and wasn't selected in the NFL draft. Then, an injury threatened to keep Phillip Lindsay from the spoils of his sensational season, the Pro Bowl. Although he won't be playing, the Denver Broncos rookie running back is attending the league's annual all-star game as a social media correspondent for the league. (AP Photo/Bryan Woolston, File)

Denver Broncos running back Phillip Lindsay is enjoying the spoils of his phenomenal rookie season even though the cast on his right wrist will keep him out of the Pro Bowl this weekend.

Lindsay is serving as a social media correspondent for the NFL at the league's annual all-star game in Orlando, Florida.

At first, it appeared that hard luck would continue into the new year for the former University of Colorado star who was excluded from the combine, snubbed in the draft and injured in Week 16.

The first undrafted rookie ever to earn a Pro Bowl selection, Lindsay really wanted to attend the Pro Bowl but because his injury would sideline him, the league couldn't foot the bill and NFL rules also prevented the Broncos from picking up the tab.

So, the NFL and the Broncos worked out a deal for the league to pick up Lindsay's travel expenses in exchange for him posting videos and photos from the Pro Bowl on its social media pages.

"They have a lot of different events for me to do, so there's a lot of cool, unique things that are going to happen with me throughout the time in Florida, so stay tuned," Lindsay said while attending the Panini Rookie Appreciation event in Los Angeles last week.

That was another of the benefits Lindsay has enjoyed after proving the league's talent evaluators and all 32 teams wrong for bypassing him last April.

"It's a surreal feeling to see yourself on a card," Lindsay said after signing his autograph on thousands of them.

Providing the Broncos with a rough-and-tumble identity and the league with one of its best feel-good stories of the season, Lindsay rushed for 1,037 yards and 10 touchdowns in 2018 after spending the first half of the season as a backup to Royce Freeman, a third-round draft pick out of Oregon.

Lindsay became the first undrafted offensive player to earn a Pro Bowl selection and only the third undrafted running back to top 1,000 yards before his right wrist injury at Oakland on Christmas Eve left him 67 yards shy of the rookie rushing record set by Dominic Rhodes of the Indianapolis Colts in 2001.

More importantly, it threatened to keep him from going to the Pro Bowl.

Now, the league is paying for his travels and he gets to hang out with his fellow stars, including teammate Chris Harris Jr., another player who was unwanted but undaunted after going undrafted.

While at the Panini America gathering with fellow star rookies, Lindsay said he ran into several NFL prospects as they prepared for the NFLPA Collegiate Bowl.

"Some of them have stopped me and asked about" making it in the NFL, Lindsay said. "The advice I give is different for different people but obviously this goes out for everybody is you've got to go out there and earn it. It comes down to heart."

While Lindsay was excited about his side gig, he wants to return to the Pro Bowl as a participant.

He said his recovery is going well and that none of the tiny bones in his wrist were cracked, as first feared.

"It looked bad. It looked like it should have been ligaments and bones. But it was just ligaments. So, they put them back together, reconstructed it and now it's all about healing," Lindsay said. "I have a cast on it, so nothing really hinders me from doing anything. I can run, I can work out. I just can't use my right arm right now.

"I don't like giving timelines because everybody's body's different. But I'm working hard, and my goal is to be ready by the first day of camp."