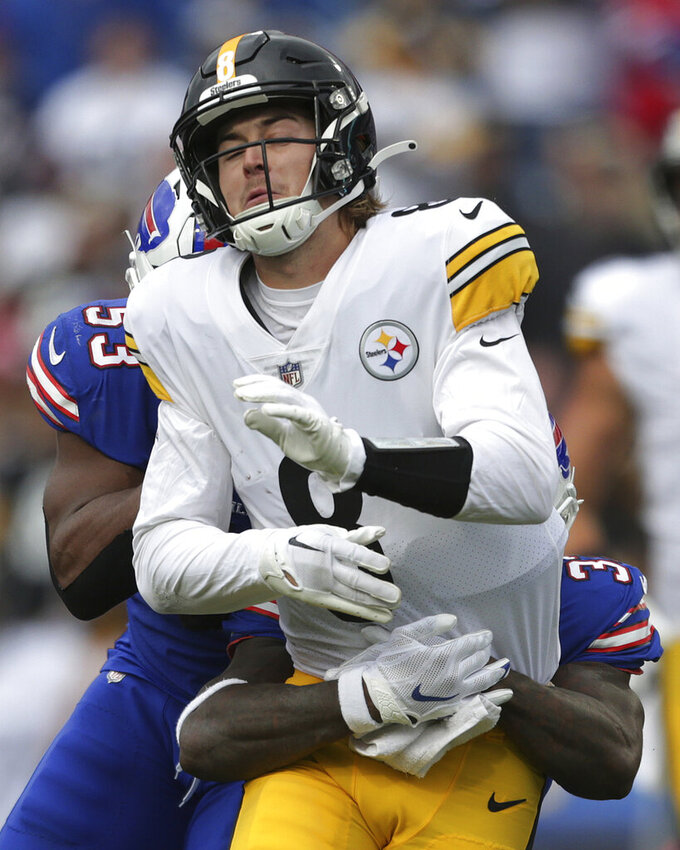 Pittsburgh Steelers quarterback Kenny Pickett is hit by Buffalo Bills linebacker Tyrel Dodson and Siran Neal, right, after getting off a pass during the second half of an NFL football game in Orchard Park, N.Y., Sunday, Oct. 9, 2022. The Bills won 38-3. (AP Photo/Joshua Bessex)

ORCHARD PARK, N.Y. (AP) — Kenny Pickett showed he could take some licks and stand up for himself in his NFL starting debut.

The injury-depleted Steelers defense, however, couldn’t withstand an offensive onslaught from the Buffalo Bills.

Pickett exhibited his frustration and competitive fire late in the fourth quarter of a 38-3 loss at Buffalo on Sunday. The Steelers rookie quarterback had to be separated from defensive end Shaq Lawson after Pickett took issue with a low hit while he was throwing a pass outside the pocket.

“I felt like he went after my knee after I tried to throw it,” Pickett said.

Steelers coach Mike Tomlin called Pickett’s response “appropriate,” but wouldn’t say much else about the fracas, or the play that led to it.

“Tempers flare,” Pickett said. “I’m going to keep playing until the last play of the game.”

The trouble wasn't how the game ended, but how it began. Buffalo opened the scoring on the third snap from scrimmage with Josh Allen hitting Gabe Davis with a 98-yard touchdown pass in a first half in which the Bills rolled to a 31-3 lead.

The Steelers (1-4) have now lost four straight, their longest skid since opening the 2013 season 0-4.

Tomlin took greater issue with the Steelers performance in their most-lopsided defeat since a 51-0 loss to the Cleveland Browns in the 1989 season opener.

“Satisfied with the effort?” Tomlin said. “We just got smashed.”

Allen and the Bills dominated the Steelers defense for 552 yards, and 432 yards passing.

“We played bad. And bad is an understatement," Steelers defensive tackle Cameron Heyward said. “To start the game, we were third-and-long, and we didn’t capitalize on that. Instead, we gave up a 98-yard pass. And that is a kick in the face, to say the least.”

The Steelers defense was missing several starters, including last year's NFL Defensive Player of the Year T.J. Watt (pectoral muscle), and lost other players to injuries during the game.

Tomlin didn’t rule out making changes to the defensive lineup and coaching staff in response, though he might be limited in how many healthy players he has.

The Steelers were hoping to get a spark from starting Pickett after the 20th overall draft pick took over the offense from Mitch Trubisky.

Pickett was productive, completing 34 of 52 passes for 327 yards. He was intercepted once, and sacked three times.

"We moved the ball. But we didn’t finish,” Pickett said of an offense that failed to convert all three fourth down attempts, and managed three points on four trips inside the Buffalo 20.

“There’s no finger-pointing,” Pickett said. “I’ve got to take a lot of ownership of this. I’m the quarterback of the team. They drafted me in the first round for a reason. To go out there and play. Once they drafted me, I wanted to be the guy. There’s a lot of things that come with that.”

While Lawson wasn’t ejected, teammate A.J. Epenesa was for making contact with an official on what was the Steelers' final snap from scrimmage.

The Steelers also took issue with what appeared to be a late hit from safety Damar Hamlin, who struck Pickett after the quarterback gave himself up by sliding in the third quarter. Offensive linemen James Daniels and Kevin Dotson both drew personal fouls for going after Hamlin.

Pickett took less issue with that hit, noting he and Hamlin played together at the University of Pittsburgh.

“That’s one of my guys,” Pickett said. “He’ll be one of my really good friends for a long time. We’re competing. It’s all good.”