Playoffs in reach for Giants, who keep silencing doubters 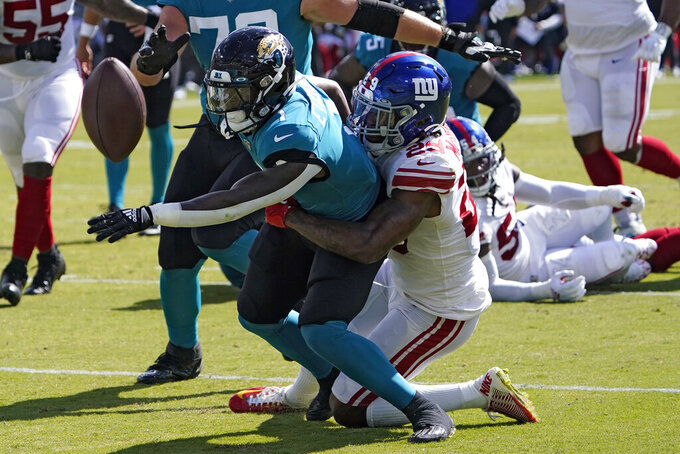 Jacksonville Jaguars running back Travis Etienne Jr. (1) fumbles when he gets hit by New York Giants safety Xavier McKinney (29) during the first half of an NFL football game Sunday, Oct. 23, 2022, in Jacksonville, Fla. (AP Photo/John Raoux) 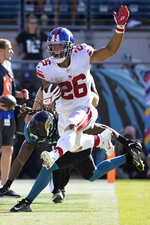 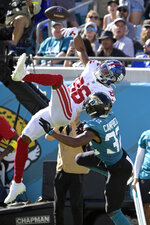 EAST RUTHERFORD, N.J. (AP) — During the first seven weeks of the season, there has been a lot of head-scratching going on about the New York Giants.

Every time Brian Daboll's team has found a way to win, the feeling has been the run will end next week. No team goes from winning four games the previous year to challenging for the NFL's best record.

Surely, the club will revert to being a team that had five straight losing seasons in a dark decade in which it made the playoffs once since winning the Super Bowl in February 2012.

Guess what? The Giants are 6-1 heading into their final game before a bye week. So it might be time to jump on the bandwagon.

Maybe the Giants aren't going to challenge for the Super Bowl this year, but Daboll and new general manager Joe Schoen have put them on the right track. They are finding ways to win, which is what sports is all about.

Take a look at their 23-17 win over Jacksonville Sunday. They stopped Jags receiver Christian Kirk after a catch at the 1-yard line on the final play of the game.

The playoffs are within reach for New York. All it has to do is keep playing the same way and continue to get massive contributions from running back Saquon Barkley, quarterback Daniel Jones and a defense that bends but doesn't give up a lot of points.

So continue to shake your head, if you must. Strange things are happening.

The Giants' running game has been outstanding. New York rushed for 236 yards against Jacksonville with Barkley and Jones both reached 100 yards — the first time since 2010 the Giants had two 100-yard rushers in a game. Barkley has 726 yards this season and New York is averaging 173.4 rushing yards per game.

The wide receivers. With Sterling Shepard out for the year, and Kadarius Toney and Kenny Golladay sidelined with injuries, the Giants have been relying on Wan'Dale Robinson, Darius Slayton, David Sills and Marcus Johnson. They have gotten by, but there were at least five drops Sunday.

CB Fabian Moreau. The Giants signed him to the practice squad after the veteran was released by Houston at the end of training camp. Moreau was elevated to the active roster twice early in the season and signed on Sept. 28. With injuries to Aaron Robinson and Cor'Dale Flott, he has moved into the starting lineup. He had seven tackles, a pass deflection and two special teams tackles Sunday.

DL Leonard Williams. The Giants' best lineman may have come back from a knee injury too early a week ago. He had a quarterback pressure and no tackles against the Jags. He was invisible most of the game.

TE Daniel Bellinger needs eye surgery to fix a fracture. The rookie may return later this season. RT Evan Neal and LG Ben Bredeson are week to week after hurting knees. Toney (hamstring), Golladay (knee), LB Azeez Ojulari (calf), LB Oshane Ximines (quad) and Flott (calf) were not available Sunday. The smart thing would be to rest everyone and try to have them ready to face Houston on Nov. 10 after the bye week.

5 — The number of game-winning, fourth-quarter drives Jones has led this season. He did it three times in his first three seasons.

The Giants head across the country to play at NFC West-leading Seattle on Sunday. It's their final game before a much-needed bye week with the injuries continuing to mount.