Plenty of blame to go around as Jaguars’ skid reaches 20 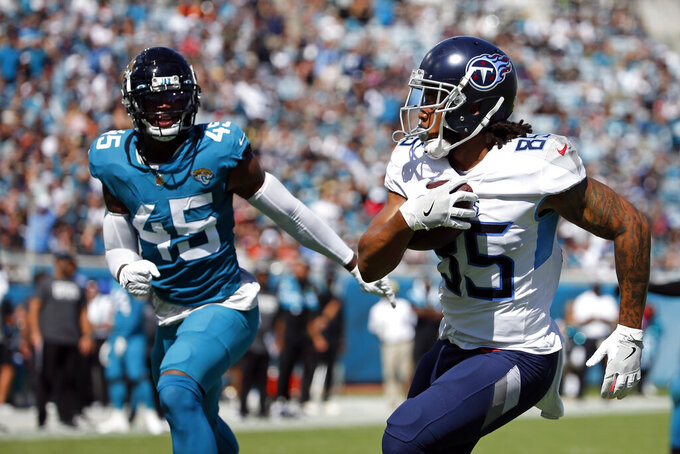 The Jaguars (0-5) have dropped 20 consecutive games, including a 37-19 loss to Tennessee on Sunday in which coach Urban Meyer’s team had so much go wrong.

“Desperate for a win,” Meyer said. “But we can’t worry about the past.”

Jacksonville is now six losses shy of the NFL record set in 1977 by Tampa Bay, an expansion team that dropped its first 26 games. The Jags don't have the same excuse as they prepare to travel to London to play a “home” game against Miami (1-4) on Sunday. Their skid is due to a combination of mistakes and mismanagement that’s been years in the making.

Owner Shad Khan, general manager Trent Baalke, Meyer and predecessors Tom Coughlin, Dave Caldwell and Doug Marrone all have played a role in the streak. So have countless assistant coaches and players, although only two – offensive tackles Cam Robinson and Jawaan Taylor – have started each of the nearly two dozen games.

Placing blame is easy. Pinpointing the precise cause is slightly more difficult. But there’s no doubt Jacksonville’s situation is primarily the result of years of personnel errors, each one compounded by the next.

Nine of the team’s 14 first-round picks drafted over the last 12 years are gone, and two more – injured running back Travis Etienne and reserve defensive lineman Taven Bryan – are doing nothing to help. Throw in pass rusher K’Lavon Chaisson, the 20th overall pick in 2020 who has two sacks in 21 games, and the genesis of Jacksonville’s skid becomes clear.

Making matters worse, the Jaguars have failed repeatedly to offset their draft-day duds with free-agent finds. They have just one free agent, guard Andrew Norwell, remaining from the previous three classes (2018-20).

Baalke and Meyer had to know what they were getting into when they took over in January. But they haven’t exactly done much to help Jacksonville climb out of its hole. Besides quarterback Trevor Lawrence, the easiest pick in franchise history, the other eight players in the team’s 2021 draft class have a combined four starts and no impact plays.

The Baalke-Meyer regime also traded linebacker Joe Schobert, who is playing well for Pittsburgh; cut linebacker Quincy Williams, who has been even better for the New York Jets; and seemingly botched several more roster decisions.

Mounting missteps are a surefire recipe for losing, and Jacksonville has done that more often than any NFL team over the past decade, are closing in on the league mark for futility.

“It’s tough,” cornerback Shaquill Griffin said. “It’s a feeling that I don’t think no one wants. There’s a lot of things that we really, really need to figure out. … It’s something that you’ve got to change. We’ve got to do it.

Running back James Robinson ran 18 times for a career-high 149 yards and a touchdown against the Titans, scoring for the third consecutive week.

His success made the decision to give the ball to backup Carlos Hyde on a fourth-and-goal play from inside the 1 in the fourth quarter even stranger. Hyde was dropped for a 3-yard loss, ending any chance the Jags had of making it a five-point game after trailing by 18.

“I don’t micromanage who’s in the game,” Meyer said. “I should have.”

Griffin should hit the JUGS machine this week. He dropped another interception, his third of the season. It’s just one of several problems for a defense that has struggled to slow down everyone.

Opposing quarterbacks have completed 74.5% of their passes while throwing for 1,470 yards, with seven touchdowns and just one interception. That’s a 115.5 passer rating against Jacksonville for journeymen Tyrod Taylor and Teddy Bridgewater, young stars Kyler Murray and Joe Burrow, and Ryan Tannehill.

An interception on the final snap prevented Lawrence from playing turnover-free football for the second straight week. Nonetheless, he continues to improve. The overall No. 1 pick completed 23 of 33 passes for 273 yards and a touchdown. He also ran for 28 yards and a score.

Center Brandon Linder will miss games for the seventh time in eight seasons, once again raising questions about his durability. Linder, a team captain who missed 33 games in his first seven seasons, injured a knee and an ankle in the fourth quarter Sunday.

Linder has one year remaining on his contract and is due to make $9 million in base salary in 2022, a lot to pay someone who can’t seem to stay healthy.

Linebackers Myles Jack (back) and Dakota Allen (shoulder) did not return. Allen was obliterated on a block by Titans running back Derrick Henry.

393 — days since Jacksonville’s last victory. The Jaguars opened the 2020 season with a home win against Indianapolis and have dropped every one since.

Fly across the pond, roughly 4,200 miles, and minimize mistakes against the Dolphins. That's probably the best chance for Jacksonville, which clearly has a small margin for error, to end its skid.