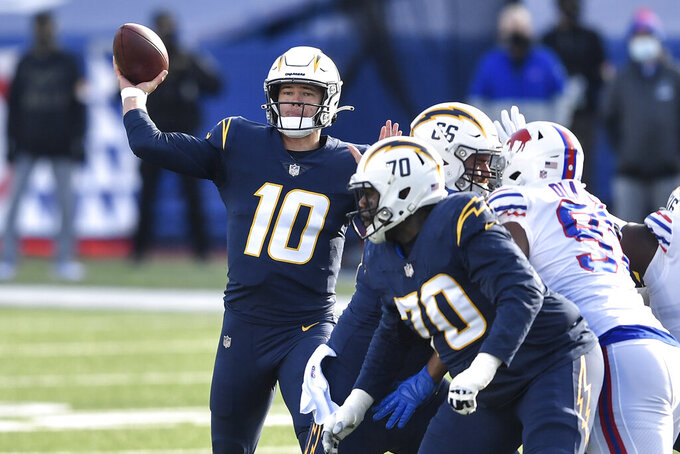 COSTA MESA, Calif. (AP) — Anthony Lynn might be running out of time to show he can still lead the Los Angeles Chargers.

The fourth-year coach is in danger of being fired after Sunday' 27-17 loss at Buffalo dropped the Chargers to 3-8. The Chargers are 8-19 since advancing to the AFC divisional round two years ago and 30-31 overall under Lynn.

“You know that comes with the territory,” Lynn said about his job security. “Of course I like my job and I want to be here and I believe that I’m the right guy for the job and we can turn this around. But that’s not my decision.”

Lynn and his staff are under increased scrutiny after a series of questionable decisions against the Bills, including a speed option on fourth-and-1 during the fourth quarter that led to a turnover on downs and a haphazard drive late in the first half that ended with a punt.

Los Angeles moved inside the Bills 30 on three of its final five drives but scored three points.

The last drive had the most obvious gaffes. The Chargers had first-and-goal at the Buffalo 2 with 25 seconds left after Justin Herbert’s 55-yard bomb to Tyron Johnson. Instead of spiking the ball, Herbert handed off to Austin Ekeler for a 1-yard gain. The final two plays were an incomplete pass and Herbert being stopped for a 2-yard loss.

Herbert is a rookie and has limited experience in late-game situations. But Lynn wouldn't blame anyone but himself.

“That falls on me. That was screwed up and it looked bad, I completely understand that,” he said. “We’ve practiced all situations before and the communication just broke down.”

With the Chargers' playoff hopes all but dashed, Lynn's team has to show massive improvement in the next five games to avoid a major restructuring.

“I’m frustrated and disappointed, but I’m gonna be myself,” he said. “It’s tough to go through so many of these but this is what we signed up for. We’re gonna finish.”

The defense generated multiple turnovers in a game for only the second time this season, recovering two fumbles and intercepting a pass in a span of eight snaps. It was the first time Gus Bradley's unit has forced three or more turnovers in a game since the 2018 regular-season finale at Denver.

Anything have to do with communication between the players and coaching staff during games. Lynn and coordinators have said way too often this season that there have been communication breakdowns during games and that players are out of position or don't know what to do during key situations. As a result, the Chargers have often looked undisciplined or unprepared.

Joey Bosa, the league's highest-paid defensive player, had a career game on Sunday.

The defensive end joined Pittsburgh's James Harrison (2007) and Kansas City's Justin Houston as the only players to have three sacks, five quarterback hits, break up a pass and have a fumble recovery in a game. Bosa also had five tackles for loss. He has 47 1/2 sacks, which is fifth in team history — just ahead of Hall of Famer Junior Seau.

Michael Badgley missed his third extra point of the season.

RT Bryan Bulaga missed the game due to illness but is likely to play next week. LB Denzel Perryman (back) is expected to be questionable going into practice this week.

6 — The number of 300-yard passing games by Herbert this season, which ties him with Andrew Luck for the most by a rookie.

The Chargers have two straight home games starting Sunday against New England (5-6). The Patriots have won three of their last four, including a 20-17 decision over Arizona this past Sunday.