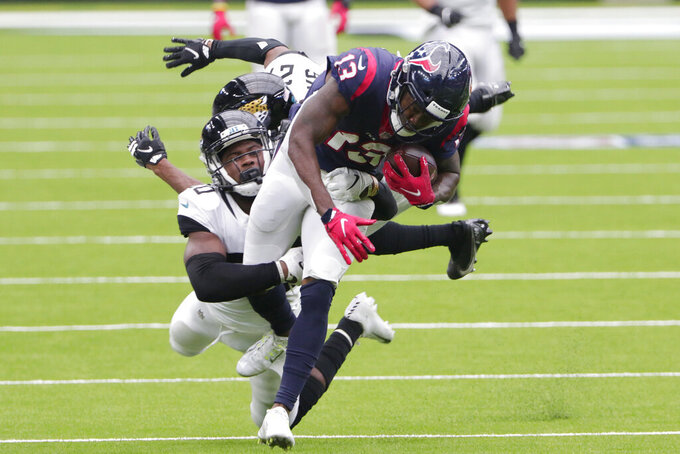 JACKSONVILLE, Fla. (AP) — Take the over.

Detroit and Jacksonville have two of the NFL’s worst defenses, unable to stop anyone, anywhere, any week. The Lions (1-3) rank last in the league in rushing yards allowed, giving up more than 170 yards a game. The Jaguars (1-4) are near the bottom of every major defensive category, including 30th in total yards and last in yards per play.

The teams are among a group of seven allowing more than 400 yards and about 30 points a game.

So when they meet in Jacksonville on Sunday for the first time in eight years, it should be an ideal matchup for a high-scoring affair. And the smart money appears to be on the over. The over/under opened at 52½ total points.

“We’re working hard to try to make sure that there is consistency,” coach Matt Patricia said.

Problem is there’s more than one area of concern. Detroit has seen different guys missing tackles and assignments and failing to shed blocks in every game.

“We have to do a better job in the run game, and we have to settle some things down there that have hurt us and play with better fundamentals and technique and just be consistent,” Patricia said. “We have some good run plays on tape and just unfortunately too many bad ones. We have to be consistent with it and try to get teams in a situation where they have to pass the ball more.”

Jacksonville is planning a heavy dose of rookie James Robinson, who is averaging nearly 5 yards a carry. Robinson has been one of the few bright spots on a team that has given up 30 or more points in four consecutive losses — the third time in franchise history they’ve done that.

The Jaguars have been downright dismal on defense, and injuries have forced several first- and second-year players into the starting lineup.

“There’s a guilt feeling I have,” coach Doug Marrone said. “There’s a pit in my stomach feeling that I have that I can’t find a way to figure out how to get these guys to (be consistent). … I don’t want to make it sound like I’m frustrated from a standpoint of I’m mad or (ticked) off or anything like that.

“That’s not how I feel. I feel hurt that I’m not able to do my job and bring them all together to be consistent.”

Matthew Stafford has thrown 264 touchdown passes since Detroit drafted him No. 1 overall in 2009.

The Jaguars, though, are the only NFL team that Stafford has not thrown for a score against. He would like to end the drought in his third game against them.

“Yeah, that’d be great,” he said. “I’d love to have that on the tombstone or something.”

The Jaguars will set an NFL record by using their fifth kicker in as many games Sunday.

It’s been a revolving door for the Jaguars since Josh Lambo injured his hip in a Week 2 loss at Tennessee. Brandon Wright and Aldrick Rosas were injured the next two games, and Steven Hauschka was cut after missing two field goals at Houston last week.

Now it’s Jon Brown’s turn. A college soccer player turned place-kicker, Brown was promoted from the practice squad and will make his NFL debut against the Lions.

Detroit’s next two opponents, Jacksonville and Atlanta, have a combined record of 1-9.

“Look, we only have one win,” said Patricia, who has won just two of his past 17 games.

“When we flipped the tape on Monday afternoon, I was like, ‘Damn, he’s still running like he did when he was 22 years old,'" Wash said. “He still has his unbelievable jump cut. I think it was nine years ago we played him in Seattle and I think he’s still running somewhere in Mexico.”

The Jags are one of three NFL teams (along with Carolina and Washington) that haven't allowed Peterson to top 100 yards rushing while playing him four times or more.

“There’s a lot of respect for him in our building and from us as a coaching staff," Wash said.