With problems all around, Herbert's Bolts take 3rd loss in 4 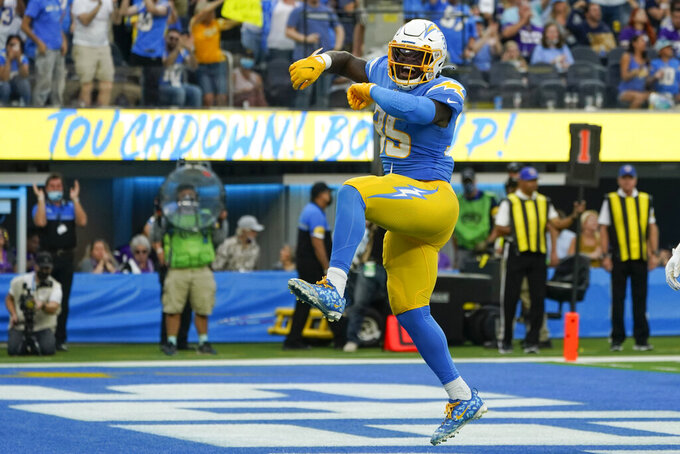 Los Angeles Chargers running back Larry Rountree III (35) celebrates after scoring a touchdown during the first half of an NFL football game against the Minnesota Vikings, Sunday, Nov. 14, 2021, in Inglewood, Calif. (AP Photo/Marcio Jose Sanchez)

INGLEWOOD, Calif. (AP) — When Justin Herbert and rookie head coach Brandon Staley won four of their first five games together, the Los Angeles Chargers appeared to be at the start of something special.

They've taken three defeats in their ensuing four games instead. The midseason skid culminated with a 27-20 home loss to the Minnesota Vikings on Sunday in which both the offense and defense were respectable, but not impressive in any aspect — and not nearly good enough to win.

Despite blowing a third-quarter lead and getting soundly outgained at home by an opponent with a losing record, Herbert and his teammates insist they've got enough time and talent to prevent this season from going sideways — you know, the direction of so many recent campaigns for a team with two playoff wins in the last 12 years.

“I think we need to keep being ourselves,” Herbert said after passing for 195 yards with a touchdown and an interception that set up Minnesota's first touchdown drive.

“We need to keep getting better, and to keep learning and to keep growing," Herbert added. "We’re right where we need to be, and as long as we’ve got everything in front of us, we keep playing our type of football and getting better. Losing is never any fun, but it’s all about how the guys show up tomorrow.”

Herbert had a 72.5 passer rating — his third game under 75 in the Chargers’ past four games. Before this rough stretch against three respected defensive coaches, the Chargers’ prized second-year passer had played just one NFL game with a rating below 75.

Baltimore, New England and now Minnesota came up with a defensive game plan that blunted Herbert's downfield connection with Keenan Allen and Mike Williams, limiting the Bolts to just one passing play longer than 17 yards.

The Chargers' offense managed only two drives longer than 48 yards, and five of its 10 drives ended in punts. It's not what Los Angeles anticipated after averaging 28.4 points in its first five games.

What's growing increasingly clear is that defenses have figured out reliable ways to slow down Herbert, whether it's the confusing zone defense employed by the Patriots or the pressure applied by Minnesota on Herbert, who got sacked twice and hit six times.

Los Angeles' rushing offense also remains tepid after managing 82 yards against the Vikings. Herbert's 17-yard scramble shortly before halftime was the Chargers' only run longer than 9 yards, underlining the offense's lack of big-play capability against defenses designed to force them to play small ball.

“We’re fighting, it seems like, every week to find our rhythm and timing,” Staley said. “And our record reflects that. We’re trying to find it. Our guys are playing hard, but our execution needs to improve.”

Playing at home still has significant drawbacks for the Bolts, too. Los Angeles is 3-1 on the road, but 2-3 at SoFi Stadium.

The Vikings had thousands of vacationing fans in the Inglewood stands, and the Chargers even had a major mid-game issue with their radio communication from the home sideline to the field, forcing safety Derwin James and cornerback Asante Samuel Jr. to get the defensive calls by ear on occasion.

The Chargers didn't seem particularly discouraged by another setback, and they're still confident they can beat teams at their level in the standings despite this loss to an opponent below them. They're home again next weekend against Pittsburgh, and none of their remaining eight opponents currently has more than Los Angeles' five victories.

“I just know when things get rolling, once everything lines up properly, we’re going to be a hard team to beat,” defensive lineman Linval Joseph said. “We’ve showed spurts on offense. We’ve got the ability to make the big runs. We’ve just got to put it all together. Special teams are playing better. Once we start playing complete games, that’s when people are going to fully respect us.”