Progress but still no wins for Flores and Dolphins 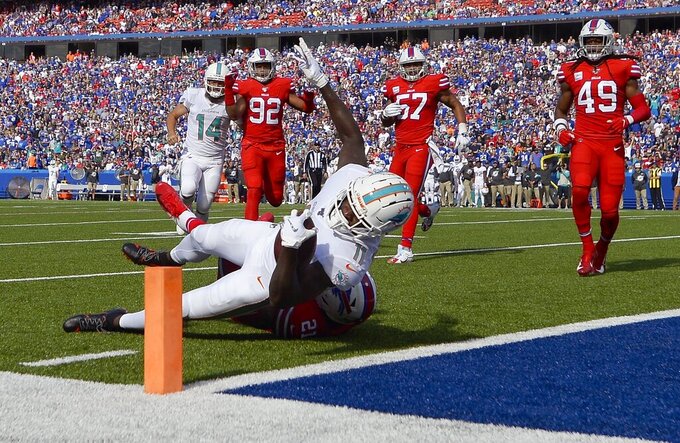 Miami Dolphins wide receiver DeVante Parker dives into the end zone for a touchdown after catching a pass in the first half of an NFL football game against the Buffalo Bills, Sunday, Oct. 20, 2019, in Orchard Park, N.Y. (AP Photo/Adrian Kraus)

DAVIE, Fla. (AP) — The Miami Dolphins have gone from losing blowouts to losing close games, a sign of improvement under rookie coach Brian Flores not yet reflected in the standings.

"We did a lot of good things," Flores said Monday, "but we've got to do a little bit more. In those critical moments we didn't play well enough."

Oddsmakers still don't believe the Dolphins are ready for prime time — they're 15½-point underdogs next Monday night at Pittsburgh. But after being outscored 163-26 in the first four games, Miami has been outscored 48-37 the past two weeks.

Here are things to know about a team that might not be the NFL's worst ever after all:

Ryan Fitzpatrick has given the offense a jump-start. The Dolphins had scored two touchdowns all season when he came off the bench in Game 5 against Washington. They've scored 35 points in five quarters since.

Miami gained a season-high 381 yards at the Bills, and totaled more points and yards against their formidable defense than any other team this year.

"We're continuously growing as a team," Fitzpatrick said. "We have to be able to stack together these minor wins of going out there and executing, and then looking at the things that are going wrong and why. But we've gotten significantly better from day one to now, and we just have to continue on that trend."

Miami topped 100 yards rushing for the first time. Mark Walton started his second game in a row and carried 14 times for 66 yards, the most by a Dolphins rusher this year.

The Dolphins rank last with a turnover differential of minus-11, including minus-two Sunday. They're also last with two takeaways and tied for second-worst with 10 interceptions.

Fitzpatrick's second-half interception in the red zone Sunday when Miami led turned the game around.

DeVante Parker caught a touchdown pass for the third game in a row, the longest streak of his career. The 2015 first-round pick is averaging 15.8 yards per catch and is on pace for a career-high total in yards receiving.

McCain engaged in a verbal confrontation with a 13-year-old Bills fan and allegedly spit in the face of another fan, and will be disciplined by the team, Flores said.

Wilkins was ejected early for throwing a punch at Bills tackle Cody Ford.

"I don't think I've ever been more disappointed in myself about something," Wilkins said.

In Week 4, Wilkins was benched by Flores after being flagged for unnecessary roughness.

"We've got to play with poise," Flores said. "There are consequences for your actions."

2011 is the last time the Dolphins started a season so badly. They lost their first seven games but finished 6-10.

"You play to win games," linebacker Jerome Baker said, "and unfortunately that's not what we're doing."