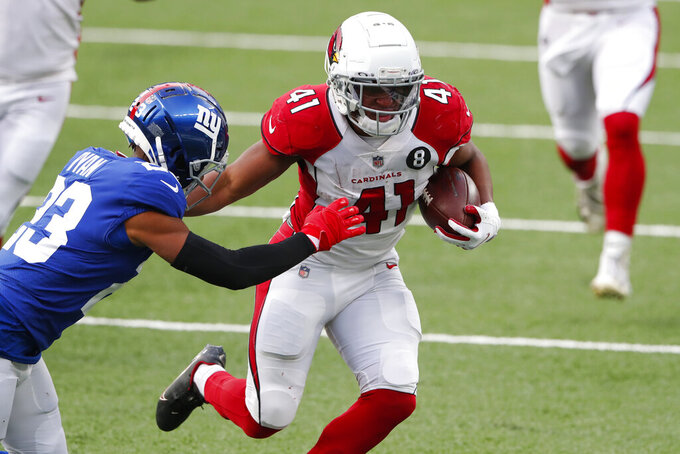 EAST RUTHERFORD, N.J. (AP) — The New York Giants might be closer to getting back starting quarterback Daniel Jones.

Jones was listed as questionable after being limited in practice Friday. He is recovering from hamstring and ankle injuries that have sidelined him for two of the last three games, but has made enough progress that could be behind center Sunday at Baltimore.

If Jones is not available, Colt McCoy would start for New York (5-9), which needs to keep winning in the NFC East, where it trails Washington by one game and is tied with Dallas.

Whoever is at quarterback, he will not have receiver Golden Tate to target. Tate was declared out with a calf issue.

Also questionable are the Giants' leading tackler, linebacker Blake Martinez (ankle), and rookie defensive back Darnay Holmes (knee). Both were limited on Friday.

The Giants also gave versatile defensive back Logan Ryan a three-year contract extension Friday. Ryan joined them in the offseason as a free agent and has been a standout on the rebuilt defense.

The New York Giants might be closer to getting back starting quarterback Daniel Jones.

“I feel super grateful,” said Ryan, who played four seasons in New England when Giants coach Joe Judge was an assistant for the Patriots. Ryan has played in all 14 games with 13 starts, 10 at free safety. He's second on the team with 81 tackles (58 solo) and has a sack, three forced fumbles, one fumble recovery and nine passes defensed. He had a clinching interception in the Giants’ victory in Washington on Nov. 8.

"I really took a bet on myself waiting as long as I did and signing a one-year deal. I just wanted to prove to the fan base, the coaching staff and my teammates what type of player and leader I can be. And I honestly think I was proving it to myself as well. This year has been about a lot of belief. I always believed in myself and held my head high and worked out for me in the end, and it worked out for the team in the end. I think it was a perfect fit from the beginning.”