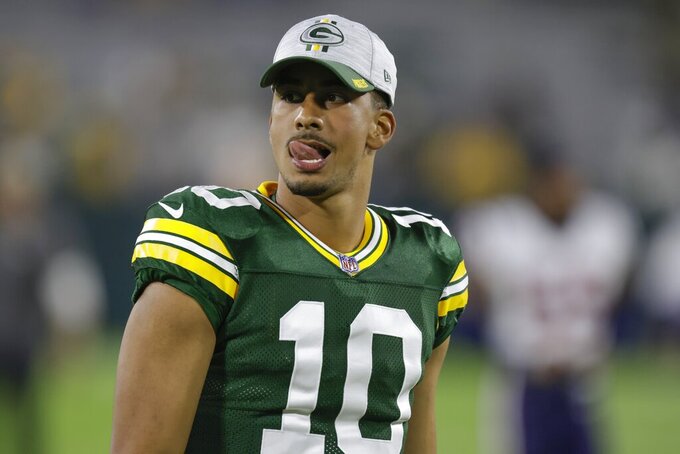 GREEN BAY, Wis. (AP) — Packers quarterback Jordan Love’s status for Green Bay’s next exhibition game is uncertain due to a shoulder issue that prevented him from playing in the second half of his pro debut.

Love said after Saturday night’s 26-7 loss to the Houston Texans that “I just dinged my shoulder a little bit” when Jonathan Greenard sacked him and forced a fumble late in the second quarter.

“He’s doing fine,” Packers coach Matt LaFleur said Sunday. “It’s something though that is significant enough that he could miss a couple of days of practice. We’ll see where he’s at, at the end of the week. We’re going to take it day by day.”

LaFleur said Saturday night that the Packers initially hoped to have Love play three quarters but decided to rest him the entire second half after the hit from Greenard.

The Packers host the New York Jets on Saturday in their next preseason matchup. They're also conducting joint practices with the Jets on Wednesday and Thursday.

If the Packers decide to hold Love out of the Jets game, they could be in the market for a quarterback in the next few days.

LaFleur has said he doesn’t plan to use reigning MVP Aaron Rodgers in any exhibition games. The only other quarterback on Green Bay’s roster is Kurt Benkert, who played the entire second half Saturday.

“We’re going to look at a few options,” general manager Brian Gutekunst said. “Matt and I are going to sit down tonight and kind of figure that out. But we’ll obviously protect the team, make sure we have somebody here.”

Packers officials said they felt good about Love’s performance in his first game since the Senior Bowl on Jan. 25, 2020. The 2020 first-round draft pick from Utah State went 12 of 17 for 122 yards with a touchdown pass to rookie seventh-round pick Kylin Hill, who turned a short completion into a 22-yard score.

Love never played in his rookie season and didn’t even get a chance to participate in preseason games last year due to the pandemic.

“He made some good plays,” offensive coordinator Nathaniel Hackett said. “He took a couple shots, too, which for a quarterback, that’s always important because obviously we protect them during practice, and for him to hang in there and deliver some really nice, accurate balls was great. And it’s just one of those things he can build on now and move forward. He finally got that first NFL game out of his system.”

Love didn’t have the benefit of playing alongside the Packers’ top players. The Packers held 30 players out of the game, including nearly all their usual starters on offense.

Green Bay couldn’t create any running room, as the Packers rushed for just 49 yards on 21 carries. Under those circumstances, Love felt he took a step forward.

“Overall, I think I played good,” Love said after the game. “A couple plays where I messed some things up, but things I’ll learn from.”

NOTES: Gutekunst said “we’ve had no discussions at this time” about adding outside linebacker Clay Matthews, who wasn’t in the NFL last season but played for the Packers from 2009-18 and eared All-Pro honors in 2010. Rodgers, receiver Randall Cobb and offensive tackle David Bakhtiari had posted pictures of Matthews on social media over the weekend. Rodgers’ post included the message, “Bring Him Back.” … Although the Packers were missing most of their weapons on offense, coaches expressed disappointment in the lack of a rushing attack against Houston. The Packers couldn’t create running room and gained just 49 yards on 21 carries. “That’s unacceptable, what we did yesterday,” Hackett said. “And I think all those guys know that. The coaches know that, we know that, and we’ve got to get better.”